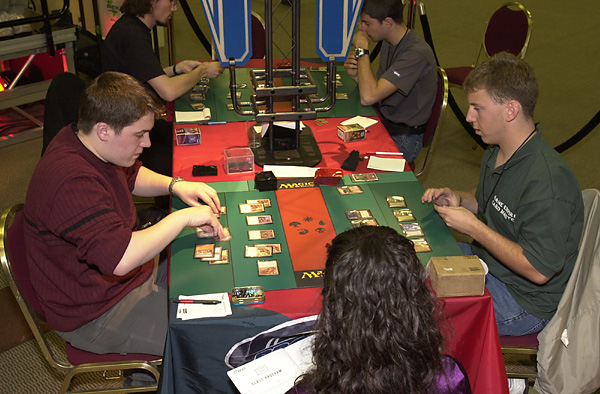 This round featured a battle between World Champions. Both American Brian Selden and German Kai Budde won their respective Worlds titles with well-established archetypes, Selden with RecSur in 1998 and Budde with Wildfire in 1999. Both pros are showing a preference for proven performers again today. Budde is running a classic Rebel deck, and Selden is playing Fires of Yavimaya. This pairing is a common occurrence here in Chicago, and although anything can happen, Fires is definitely the favorite. Cards like Earthquake and Flashfires are a serious problem for Rebels, and the matchup is heavily influenced by whether Fires draws these two powerhouses. Keys to victory for Rebels are it's answers to big creatures and Saproling Burst, such as Parallax Wave, Disenchant, and Reverent Mantra.

Game 1 started poorly for Selden: Budde won the roll and chose to play, and Selden took a mulligan. Budde got out a early Steadfast Guard, followed by Lin Sivvi. The Guard steadily inflicted two damage a turn while Lin started searching up the Rebel chain. By turn eight, Budde was still at 20 life, and Selden was at 12 due to Steadfast Guard and Thermal Glider damage alone. Then on Selden's turn eight, the game took a major turn with an Earthquake for four. After a long pause, Selden asked "it resolves?" to which Budde replied "Uh... no! Let me do something in response." Budde searched out two Defiant Falcons who would survive the quake, and was left with only the two Rebel Birds and the Thermal Glider. With most of Budde's blockers out of the way, Selden was finally able to get aggressive with the resources he had been building up over the previous turns: a Fires of Yavimaya, Blastoderm, and Chimeric Idol. Selden's next turn brought a Saproling Burst, and Budde, caught without a Disenchant, was forced to block with the few resources he had been able to cast after the Earthquake. Selden kept the pressure on with another Blastoderm, and Budde conceded.

Budde seemed disconcerted that he had been outraced in game 1 after his early lead. "One Disenchant or Parallax Wave," he moaned. Selden agreed, "Yeah, most of these games come down to the Wave or you not having a Disenchant."

Game 2 started much like game 1, with Budde choosing to play first and Selden taking a mulligan. Budde again got in the first damage, attacking through the air with a Defiant Falcon while searching out Rebels with Lin Sivvi. Selden cast some Llanowar Elves and a Blastoderm, but the untargetable beast was killed on its first attack by a blocking Defiant Vanguard. Selden made a 3/3 elephant token with Assault & Battery, but it was unable to stand up to Budde's Chimeric Idol, Ramosian Sky Marshal, and multiple smaller Rebels. Budde insured his already solid victory by casting Parallax Wave the next turn, removing all of Selden's creatures from the game, and attacking to bring Selden to eight life. Selden drew an Earthquake the following turn, but it was too late.

Game 3 was definitely the most dramatic of the match, and featured some unexpected sideboard cards. Budde, as before, got in the first damage with a Steadfast Guard. Selden spent the first few turns casting Elves, and was soon at 15 due to the Guard and his own Karplusan Forests. On Selden's turn four, he tapped four lands and two Elves and cast, of all things, Two-Headed Dragon! You know, the little kids like their fatties. Although some of the spectators seemed impressed by the turn four flying fatty, Budde was not. On his next turn, he calmly cast Parallax Wave, removed the Dragon from the game, and continued his Rebel assault. Selden had answers of his own. He destroyed the Parallax Wave with a Reverent Silence, using the alternative casting cost (giving Budde six life) so that he could then use his remaining mana to Earthquake for three. This put Selden in a difficult position. He was at nine life, and Budde was at seventeen. He had the Dragon, with four mana to pump it, but Budde had a Steadfast Guard and a Chimeric Idol that he cast immediately following the Earthquake. The question Selden had to ask himself was "race or no?" After thinking a very, very, long time, Selden decided that the answer was no and held the Dragon back to block. Budde, meanwhile, started using his Dust Bowl to destroy all of Selden's non-basic land, significantly reducing Selden's ability to pump up the Dragon. Selden finally drew an Assault to destroy the Steadfast Guard, and decided it was time for offense. He attacked with the Dragon, able to pump it up once, bringing Budde to eleven. Budde countered by attacking with his Chimeric Idol, reducing Selden to six, and cast a Defiant Falcon. Selden shot down the Falcon with an Assault, and send the Dragon for four, bringing Budde to seven. Kai counterattacked, and Selden was at 3. On the last turn of the game, Selden topdecked the second source of red he needed to pump the Dragon exactly enough times to deal lethal damage.

Of note in this match was that both players had multilands that produced off colors, but neither cast a spell that might reveal what those colors were for. Budde played with Brushlands, and Selden played with Sulfurous Springs. Both players declined to comment what their secret green or black sideboard tech might be.