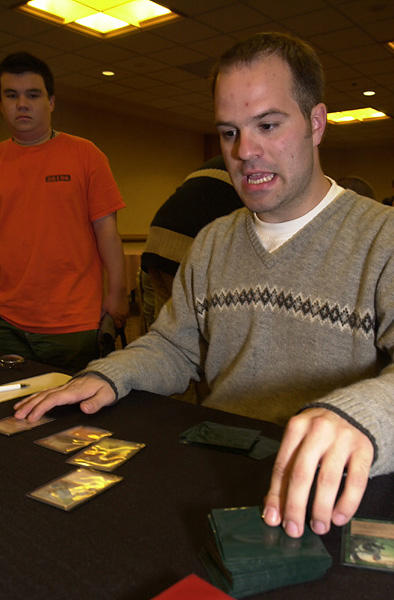 Mike Long is the only person to attend all five Invitationals. He won the 1999 Barcelona Invitational that win made him famous, putting his cute little face on Rootwater Thief cards around the world. He has made the most money in Magic next to Jon Finkel. He continues to make money in the Magic community buying and selling cards, and with his store The End. By winning Round One, he made another four grand from Magic. He was hoping to make yet another two grand with his Green\White splashing Red deck.

Dave Williams was confident with his Blue\Black Beatdown and said, "I'm going to smash him." If he wins it will allow him to pay off all of his debt, including student loans. Williams is doing great this year with a top four at GP Porto, top 32 at Buenos Aires, and ninth at GP Phoenix.

Before game one started they got deck checked. This isn't unusual for Long and he says he gets checked a lot. Everything came back just dandy and they started game one.

Both players started out fast. Williams played a third turn Urborg Drake and Long played a second turn Nomadic Elf. Dave started attacking every turn with the Urborg Drake and shut down anything and everything Long cast. He started with Exotic Curse on the Nomadic Elf, he then Recoiled his Serpentine Kavu, and followed up with Reckless Spite on Long's Sunscape Apprentice and Serpentine Kavu, that Long had cast a second time. It was absolutely ridiculous! During all that Williams cast Crosis' Attendant and was attacking for five a turn with that and the Urborg Drake. Williams then finished up the game by destroying Long's Kavu Climber with Agonizing Demise. 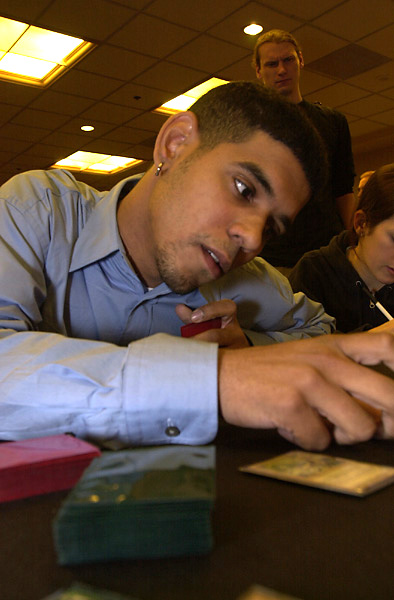 Long went first and kept his opening hand saying, "I'll run this." Long had Might Weaver, Pincer Spider, Quirion Sentinel and Nomadic Elf in play by turn four. He then traded his Might Weaver for Williams' Ravenous Rats and killed Williams' Metathran Transport when he Explosive Growthed his Pincer Spider. That is where Long ran out of steam. The game swung hard in Williams' favor as he cast Hypnotic Cloud and emptied Long's hand. Long was then forced to sit back defenseless as Williams' cast Urborg Drake followed up with Faerie Squadron.

At this point, Long got a little quiet. Williams on the other hand was looking very smug and started getting a little cheeky. Long managed to deal with the Duskwalker Williams cast by casting Explosive Growth on his Nomadic Elf. However, Williams went on to clear the board insanely fast. He Agonizing Demised the Pincer Spider and that allowed him to start hitting Long for five a turn. For lack of anything else, he even Exotic Cursed Long's Sunscape Apprentice, his only non-land permanent. At this rate it didn't take long for Long to pack up.