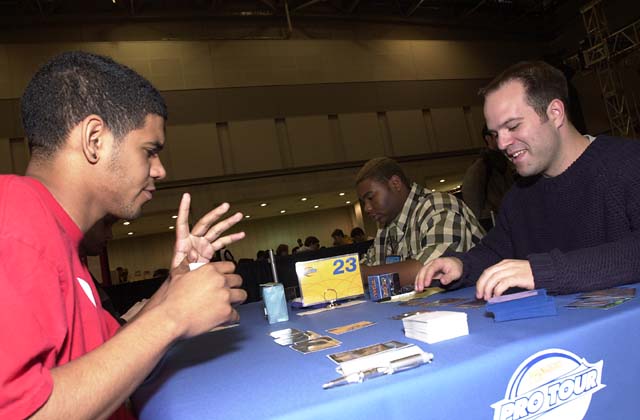 Williams and Long are two of the most colorful characters on the Pro-Tour. Mike Long's history of antics have made him a kind of anti-hero to players and spectators alike, and his charisma has won him more than a fair share of fans. Texas player Dave Williams is among the top players in the game, and his flair during competition tends to draw a crowd.

They played similar decks, both with Black/Red using Darigaaz's Caldera to splash for Green, but the similarities ended there. Long's deck was extremely aggressive, running Thunderscape Apprentices, Vicious Kavu, Scuta, and Skizzik. While Williams' deck, designed by a cadre of Wisconsin players, also played Skizzik, his was far more controlling, running Bog Down and Crypt Angels. Many players have debated that a tempo oriented Black/Red deck could outrun the control elements of discard, and this matchup would be a chance to prove the point.

The early game was fairly slow, with Long dropping the first non-land: Pyre Zombie. "And foil too!" grimaced Williams in disgust. Pyre Zombie is notoriously powerful in the mirror match. While not exactly a mirror, generally, both players in Black/Red would end up wearing down the other's hand and trading often, and being able to draw more threats off of the deck would often choose a victor. Pyre Zombie skirted the issue by being able to always be "drawn," given enough mana. 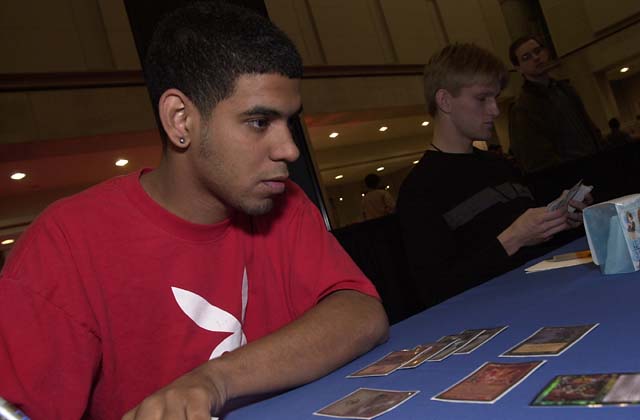 Williams Flametongue Kavu brought out a temporary answer, and a Terminate killed Long's next threat, Phyrexian Scuta. Dave's hand attack soon came out. A Thunderscape Battlemage and Ravenous Rat dropped out a land, Terminate, and Thunderscape Battlemage from Long's hand, though Long made up the difference by trading his recurring Zombie for a few of Dave's creatures.

With no real cards left in hand, Long looked meek, and Williams brought the attack home with Skizzik. Long answered with Terminate, but in the next two turns, Williams Crypt Angel brought a Flametongue to his hand, he followed with a Skizzik, and Long's own new Skizzik had to be held back on the defense. After Williams inevitable attack, Long's Pyre Zombie and Burn had cleared the table to a sole Crypt Angel, but his hand was empty, and he was without threats. At 2 life, he scooped when he failed to draw an answer.

Long sideboarded into an even more aggressive deck, adding in Lord of the Undead, Blazing Specter, Scuta, and 4 Skittish Kavu. Williams, on the other hand, opted to increase his control spells with 3 Yawgmoth's Agenda, giving his a critical ability to win "top-deck" wars.

Long's plan seemed to start well, on the 4th turn, he had dropped 3 Skittish Kavu onto the table, and killed Williams' first creature. Williams' control elements soon kicked in. A Battlemage traded with on Skittish Kavu, and a Flametongue killed another.

"All that work, and I only got you to 16," said Long, visibly frustrated. 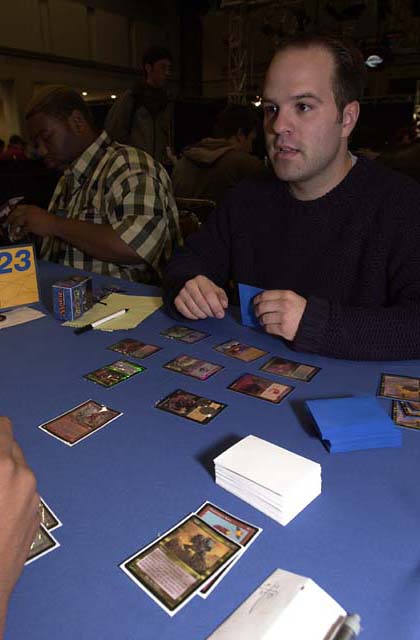 Soon, the tide turned. Williams dropped a Blazing Specter and used Crypt Angel to return Flametongue Kavu from the grave. Long tried to race with a Skizzik, but soon a Skizzik of Dave's own joined the Blazing Specter in the air. The Flametongue Kavu made the race mostly for show, but the initial damage that Dave had taken from Skizzik and Skittish Kavu opened up a one turn window for Long to draw another Skizzik for the kill. Failing to draw it, he conceded the game and the match to William's vastly superior board.