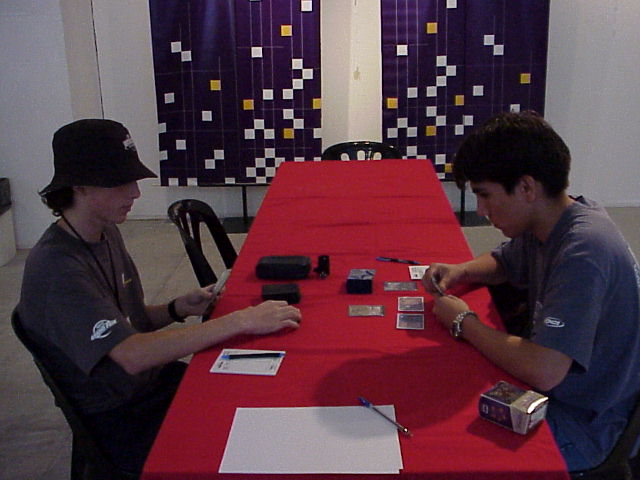 With the second round getting under way, 16-year old Argentine Matias Novarino, playing Turbo Land, squared off against 17-year old Chilean Fransisco Gaeta, a member of the 1999 Chilean National team.
Game one saw Francisco's Sliver deck come out in fine form, starting with a first turn Hibernation Sliver followed by its Muscular cousin on turn 3. Matias was able to play an Oath of Druids, but Francisco top decked a Demonic Consultation, which he used to get a Seal of Cleansing, taking care of the threat. Matias drew another Oath on turn 4, but, with the Argentine at 12 life, Francisco was able to go on the offensive, playing a second Muscle Sliver and attacking, taking Novarino to 5 life. 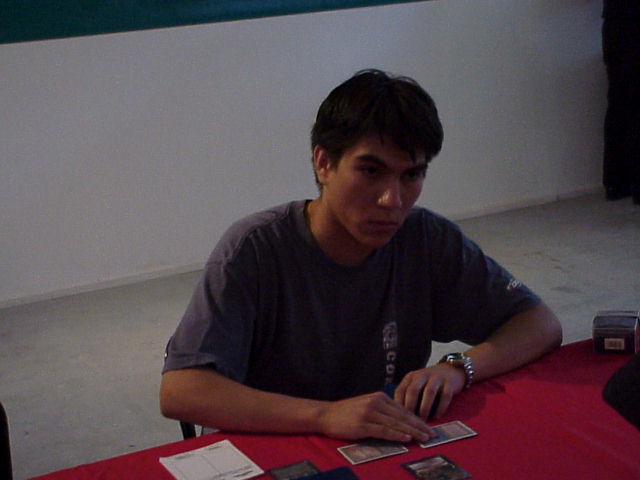 Matias was able to Oath out a Spike Feeder, but once again Francisco drew well, casting a Winged Sliver. Without any way to stop the flying horde, Matias was forced to concede a turn before he would have taken control of the game.
Game two was all about one card; Treetop Village. With Fransisco drawing all sorts of hate, including Annul, Pyroblast and Seal of Cleansing, his draw lacked only one thing: creatures. Matias played a second turn tree and proceeded to attack with it time and again. Gaeta was only able to muster one creature, a Crystaline Sliver, and was soon overrun by trample damage. 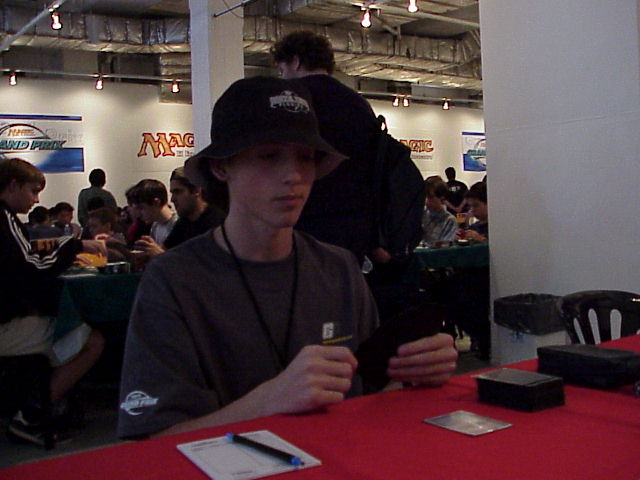 Game three started with Francisco Duressing an Exploration, but Matias was able to top deck another. Fortunately for the Chilean, he was able to use his Seal of Cleansing to get rid of the Enchantment, gaining card advantage by Pyroblasting Matias' Force of Will. Matias started attacking with his Treetop Village while Francisco played a Crystaline Sliver, but when he Impulsed into an Oath of Druids and drew a Counterspell, he realized he only had one blue source of mana and couldn't stop Francisco's Seal of Cleansing. Soon, there were too many slivers for Matias to stop, and he conceded the game, and the match.