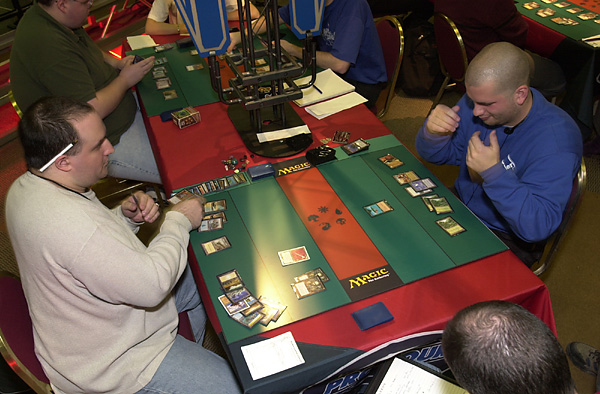 This was a meeting between two good friends who had tested this matchup together. Dirk Baberowski, past Pro Tour Chicago Champion and "the heart and soul of the German Magic community," as Gary puts it, was playing red/green beatdown with Fires of Yavimaya, Jade Leech, and Blastoderm. Gary Wise is still, no matter how many times we close our eyes and wish otherwise, a member of the PTNY Championship Team, Potato Nation. In any case, he was playing blue/white heavy control featuring Wrath of God, Rout, and multiple cantrips, with Blinding Angel as path to victory.

Gary won the coin flip and elected to play. Both kept their initial hands. There was no real action until Gary's fourth turn, when he played a Disrupting Scepter. Dirk responded on his turn with a Jade Leech, which is rumored to do a bit more damage than a Scepter during combat. Gary weathered three swings with the Leech, while Dirk weathers three "swings" with the Scepter.

Gary finally Routed to move the Leech off the table; it was quickly replaced with a Blastoderm. Unfortunately for Dirk, Gary was able to use cantrips (Accumulated Knowledge, Tsabo's Web) to find and play a Wrath of God.

The card advantage for Gary got close to obscene: two Dismantling Blows, all four Accumulated Knowledges, and two Tsabo's Web - and as Dirk was unable to keep a threat on the board, he concedes.

After the first game, Gary and Mark Rosewater enjoyed a spirited discussion of exactly what was and what was not allowed on the Feature Match Official Game Board, such as putting a tapped Disrupting Scepter into the red "active" area. At one point, Gary muttered something under his breath that sounded like "corporate weasel" while Mark whispered something along the lines of "insufferable Canadian;" but this reporter cannot confirm either quote.

In any case, everyone agrees that the Feature Match Official Game Board, with its bold lines and comfy surface, is very impressive. That was enough to get folks on to game two.

Dirk started off a lot more quickly this time, using Llanowar Elves to get out a turn two Fires of Yavimaya. His Chimeric Idol was able to serve early before Gary used Fact or Fiction to find a Dismantling Blow. A turn five Wrath of God swept off two mana elves, and once again the control machine began to grind Dirk down.

Over the next ten turns, Dirk was able to draw and propose four distinct threats -- two Jade Leeches (both countered) and two Chimeric Idols (both dealt Dismantling Blows). There was a noble effort on turn 11 as Gary swings with a Blinding Angel, Dirk casts Rhystic Lightning on it (for 2), and then blocked with a Birds of Paradise pumped by the sacrificable Fires of Yavimaya. Angel died, birds survive! This reporter nearly burst out cheering.

However, that is the extent of the red/green deck's heroism. Unable to draw any more threats, Dirk eventually conceded in the face of two additional angels.