Round 2 Feature Match: Goldnight or Glory?

It was a showdown between two faces of French Magic in the second round of Pro Tour Avacyn Restored. On one side of the table, Hall of Famer Gabriel Nassif, a living legend. On the other, Elie Pichon who made a deep run at last year's Rookie of the Year title (thanks in particular to a 3rd place finish at Pro Tour Amsterdam) before being surpassed by Matthias Hunt.

For this event, Nassif's longtime super-team (what else would you call a group that features Nassif, Finkel and Kai?) are flying under the banner of Star City Games as team SCG Black. They've put together a White-Blue-Red control deck that draws on the power of Desperate Ravings and boasts a comprehensive removal suite. Pichon is playing a strange concoction that aims to exploit a number of utility humans, fill the graveyard, and then get them all back with Angel of Glory's Rise. 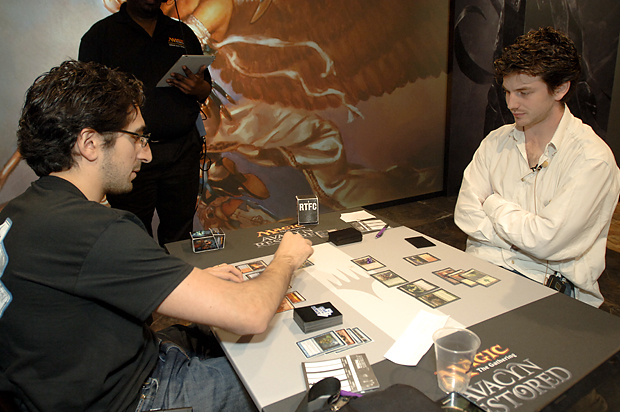 Gisela, Blade of Goldnight, or Angel of Glory's Rise? Both Gabriel Nassif and Elie Pichon are packing game-altering Angels in their respective decks.

Nassif mulliganed and kept his six. Pichon's deck was slow off the blocks thanks to Clifftop Retreat and Evolving Wilds. His tardy Champion of the Parish grew to a 2/2 thanks to Borderland Ranger (fetching a Swamp) and attacked into Nassif's three untapped mana. Nassif cast Desperate Ravings, losing a Fettergeist, and fell to eighteen.

In the face of Pichon's creatures, Nassif played his fourth land and tapped out to Amass the Components. Pichon couldn't punish him, managing only an Avacyn's Pilgrim and a Disciple of Griselbrand that made Nassif lean in for a closer look. Nassif untapped and dropped Tamiyo, the Moon Sage, locking down the Champion. The remainder of Pichon's creatures brought her down to just one loyalty. Pichon played a Cathedral Sanctifier with a sheepish giggle and passed.

Nassif considered all his options before freezing Clifftop Retreat with Tamiyo and casting Terminus. A clear board, a resolved planeswalker, a healthy life total and a grip full of cards: all signs pointed in Nassif's favor. It hardly mattered that Pichon's life total had climbed past 30 thanks to the Disciple.

Pichon tried to build a presence on the board, but it just wasn't happening. Whenever he tried to threaten Tamiyo, Nassif was ready with removal. Soon Nassif added Lone Revenant to the board. Pichon Mulched Retoration Angel into his graveyard and played a Fiend Hunter to chump for a turn. Nassif turned up the heat with Gisela, Blade of Goldnight. Pichon played Cavern of Souls on Humans and cast Geist-Honored Monk, which chumped the Revenant, leaving two spirits behind. Nassif cast Fettergeist and passed.

With a Cavern of Souls on Angels, Pichon flipped the script by casting Angel of Glory's Rise. Suddenly his board was jammed with an 8/8 Champion of the Parish, an even bigger Geist-Honored Monk, and two Fiend Hunters for Nassif's creatures. 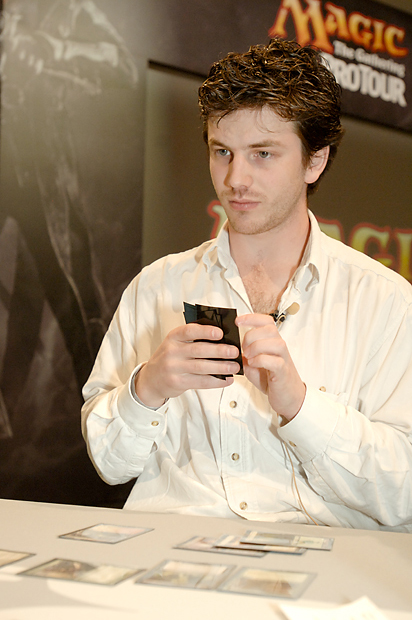 Angel of Glory's Rise reversed the roles in Pichon's favor.

Nassif drew, looted, then drew two off Tamiyo in desperation. Still, he could not find a Terminus. He passed. Pichon worried over his creatures before turning all but the Fiend Hunters sideways. Nassif played Harvest Pyre, freeing Gisela from the Fiend Hunter. She blocked the giant Champion of the Parish. Lone Revenant ate the Disciple of Griselbrand, and thanks to Gisela the unblocked creatures left Nassif alive at 4.

He untapped, froze the Geist-Honored Monk, and got back his Fettergeist with Pillar of Fire on the other Fiend Hunter. He was once again safe, albeit uneasily. For a few turns they played draw-go. Of course, that was tilted horribly in Nassif's favor thanks to a pair of Desolate Lighthouses. An Unburial Rites from Pichon met a Dissipate off Desperate Ravings. A Huntmaster of the Fells brought out another Terminus. 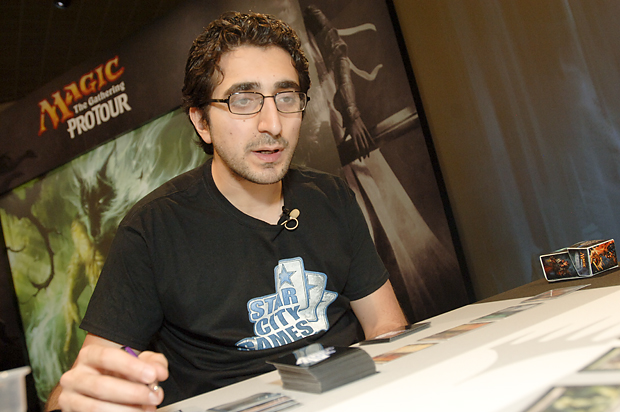 Terminus: a solid answer to a deck looking to resurrect all of its Humans.

With time winding down, Pichon stood at 40 life. Devil's Play took 15 of that, and then Nassif found another Gisela. He spent the rest of his mana flashing back Devil's Play, its damage doubled to 12. Pichon found another Angel of Glory's Rise, but the bulk of his creatures were on the bottom of his library, and Nassif had another Devil's Play in the graveyard, giving him the first game.

All that bedlam left just nine minutes on the clock. The players dawdled over their sideboards, Nassif in particular agonizing about a last-minute substitution.

Nassif drew up a sketchy seven and reluctantly sent it back. His six were no better. Nor were his five. With the clock dwindling he shuffled up a hand of four. Time ran out during Nassif's second turn. Pichon had only the extra turns to eke out a draw. He had Avacyn's Pilgrim and Cavern of Souls on Angel. Nassif played his third land and passed. Pichon played Restoration Angel at end of turn.

Nassif tapped three and went for Dissipate, saying that Pichon hadn't made explicit that he was using the Cavern of Souls for colored mana.

Pichon looked at Nassif incredulously. Before the table judge could make a ruling, Nassif relented on his claim.

It didn't matter much. Pichon didn't have enough creatures to threaten lethal damage, and the second game ended in a draw.