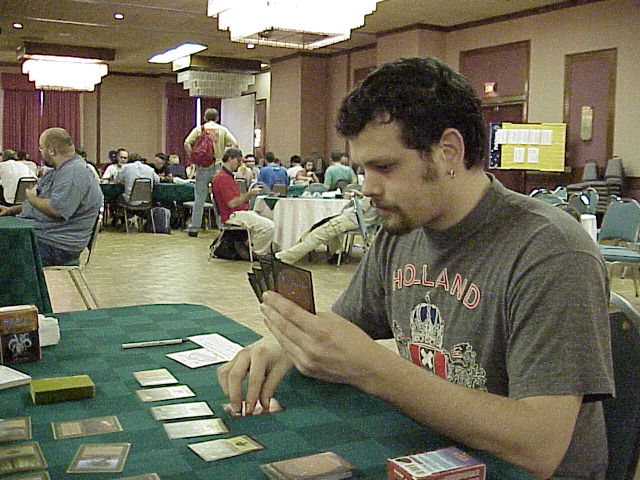 Latin American Champion Gustavo Chapela made the trip from Mexico City to Dallas along with two other Mexican players. In round 2, Chapela took on Vincent "Busty" Johnson - one of the best local players. Johnson, who made the Top 8 at Grand Prix Kansas City, is from Dallas and trying to defend his home turf.

Chapela stopped at 2 lands in game 1 and was forced to discard two times, but Johnson couldn't punish him for his slow start. Johnson had plenty of Plains, Swamps, and Forests, but his hand was full of blue and red spells! Chapela eventually drew into land and used a Repulse to counter Johnson's Shackles. Chapela played out a Tower Drake and a Jade Leech while Johnson pounded his deck. Johnson's deck rewarded him with a (4/4) Sulam Djinn, but Chapela destroyed it with Breath of Darigaaz (with kicker). His 5/5 Leech survived the breath and came across for the final points of damage. 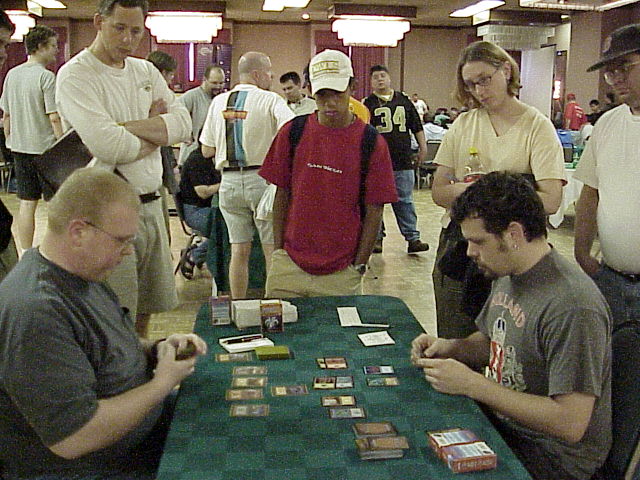 Johnson's 5-color green deck had no mana problems in game 2. He started out with turn 2 Utopia Tree and then dropped Thornscape Master on the third turn. The Master was able to destroy any small creatures that Chapela played so instead he took damage for a few turns and built up enough mana for Molimo, Maro-Sorceror! Johnson had the answer, though - Tsabo's Decree naming 'Legends.' Chapela tried stalling for as long as possible while Johnson attacked through Chapela's Pincer Spider. Breath of Darigaaz would have swept the board and Johnson may actually have overextended a bit too much, but Chapela couldn't hold on long enough to draw it and Johnson's swarm evened the match at a game apiece. 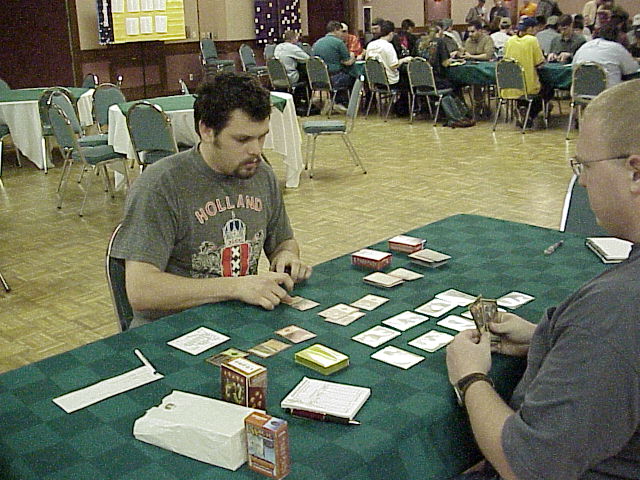 Chapela led with a tapper in game 3 (Stormscape Apprentice). Johnson played out a turn 4 Trench Wurm and then dropped a bomb on turn 5: Plague Spitter. During Johnson's upkeep, the Spitter would deal one point of damage to all creatures and players. That meant death for Chapela's Apprentice and more death for the one in his hand. Chapela bounced Plague Spitter with Repulse to keep his Apprentice alive and draw deeper into his library looking for an answer. After Johnson replayed the Spitter, Chapela finally drew a Mountain and used Scorching Lava to destroy it. The one tapper died, but this allowed Chapela to dominate the board with the Stormscape Apprentice he had been holding in his hand. Johnson used Exotic Curse with 4 basic land types to destroy Chapela's Serpentine Kavu, but Chapela followed up with Jade Leech and then Zanam Djinn. Johnson couldn't answer either threat and the Latin American champ, Gustavo Chapela, moved to 2-0 in the tournament. 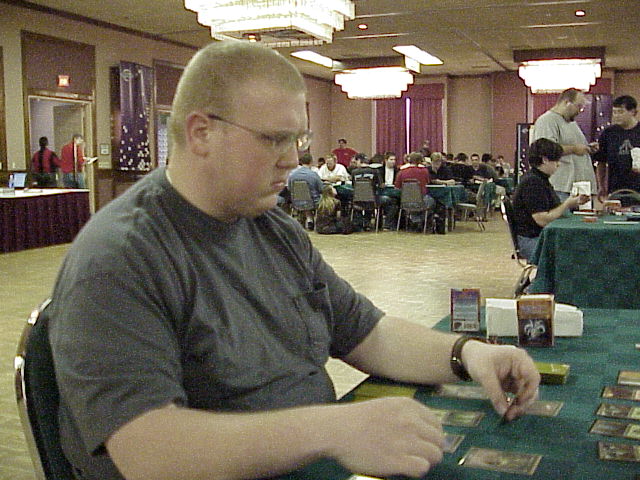