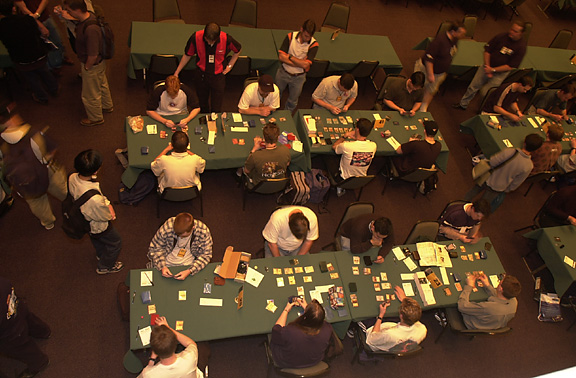 These two have both been qualified for a number of Pro Tours. John Ou (pronounced Oh) was playing an Oath of Druids deck against Stu Gillard's Counter Sliver deck.

After mulliganing, Gillard started and played a turn two Winged Sliver. Ou was forced to Impulse turn four looking for land and had his Spike Weaver Counterspelled immediately after. Gillard played Muscle Sliver and continued attacking putting Ou down to 15. Ou Swords of Plowshared Gillard's Muscle Sliver only to have him Demonic Consultation to get another in hand. Gillard continued the beats while he Counterspelled the Oath of Druids and Swords of Plowshares that Ou tried to play. Ou then Impulsed and when he found nothing to help he conceded.

Gillard drew and on his first turn he Demonic Consultationed to get Force of Will in hand. Ou Enlightened Tutored for Hidden Gibbons and had it Force of Willed by a happy Stu Gillard. Ou wasn't discouraged and had Oath of Druids in play turn four. Gillard played Hibernation Silver only to return it to hand when Ou put Crater Hellion into play off of the Oath of Druids.

On turn five things got vicious. Gillard sacrificed Flood Plain, and after he laid his land Ou threatened to call the judge for stalling. Gillard was slightly taken aback and asked, "Are we going to play nice, or are we going to play nasty?" It didn't turn into a blood bath, but the match did go on for quite some time.

Gillard then did something very curious. He had Acidic Sliver and Hibernation Sliver in play and he started chump blocking at 12 life against the Spike Feeder and Spike Weaver. He didn't gang block to rid Ou of one of the two and didn't return them to hand either. Instead he went on to chump block every turn and use the Oath of Druids to reveal more creatures. I'm not sure what he was hoping to do, but in the end he decked himself and they moved on to game three.

Ou had Oath of Druids in play turn two and Spike Feeder and Spike Weaver followed soon thereafter. On Gillard's side he had Hibernation Sliver and Winged Sliver in play. After the first two games taking so long, game three was already on extra turns after turn four. There was a small counter war when Ou tried to get Hidden Gibbons in play that Gillard won.

The next couple of turns were questionable and the head judge came to sort things out. The problem was the wording on the Oath of Druids. When the creatures were equal on either side Ou would sacrifice a creature, such as Crater Hellion or Spike Feeder, and then activate the ability on Oath of Druids. You can not do that because the errata have been changed and now say, "at the beginning of your upkeep." If you want to sacrifice anything you need to do it at the end of your opponent's turn. The game ended in a draw but the match could have ended differently if attention had been drawn to this earlier.