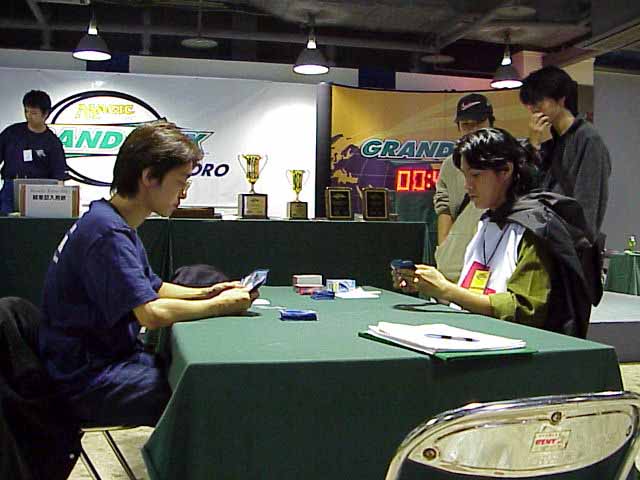 The second round feature match placed the Filipino Knight, Miguel Suaco, against John Taro from Japan.

Game One Both players start very fast with John opening up with a Spiketail Hatchling and Miguel with a Darting Merfolk. The Hatchling did one turn of damage before it was sacrificed to counter a Blaster Mage. Next, John brings in a Stinging Barrier which is followed by an Ogre Taskmaster by Miguel. The Darting Merfolk is sent to the graveyard by a ping from the Stinging Barrier, but then Miguel drops his bomb, playing a Troubled Healer. The Healer is followed by a Giant Caterpillar by John and a Latulla, Keldon Overseer by Miguel. 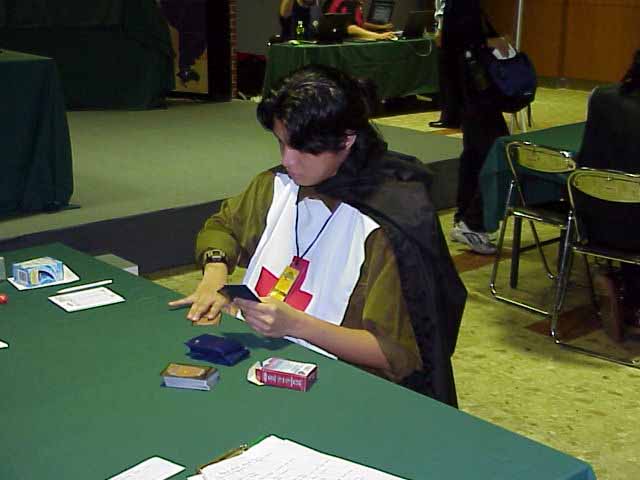 The game slows down as every attack phase is precluded by lots of thinking by each player. It looks like Miguel may gain the upperhand when he draws enough land to cast a Dominate, but it ends up being Counterspelled by John. John starts getting better draws, with more fat coming over to his side in the form of a Snorting Gahr. John starts attacking with everything and Miguel is forced to start sacrificing land to his Troubled Healer as he hovers above one life. When Miguel is forced down to 2 land and one life he scoops, giving John the first game.

Game Two An early Trickster Mage by John does some damage before a Troubled Healer comes to the table from Miguel. A Deepwood Drummer joins the Mage for some serious jamming and the Troubled Healer is forced to eat a land to keep itself alive. A Lunge by Miguel quickly ends that party as the Drummer hits the graveyard. Some more creatures are played by Miguel, including a Lightning Hounds, Stormwatch Eagle and Latulla. Dehydration stops Latulla after one attack phase and a Bribery gets Miguel's Stinging Barrier on to John's side. Troubled Healer proves too strong as most of John's creatures die in combat. A few attacks with every creature by Miguel brings John down to 1 life. which is followed by a scoop a turn later. 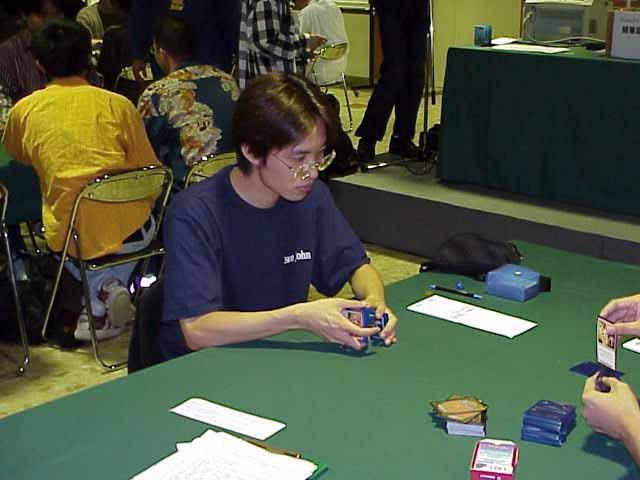 Game Three The first few turns feature a Flowstone Armour by John and after the 4th land drop, an Ogre Taskmaster by Miguel. A Zerapa Minotaur follows the Ogre on Miguel's team and John can only manage a Spore Frog and a Spiketail Drake. Miguel continues the beatings by dropping an Oraxid and a Shock Troops. John produces a Stinging Barrier which is immediately followed by a Blaster Mage by Miguel. Miguel plays a Scoria Cat which combines with the Ogre and Minotaur to finish John off and Miguel wins the match.