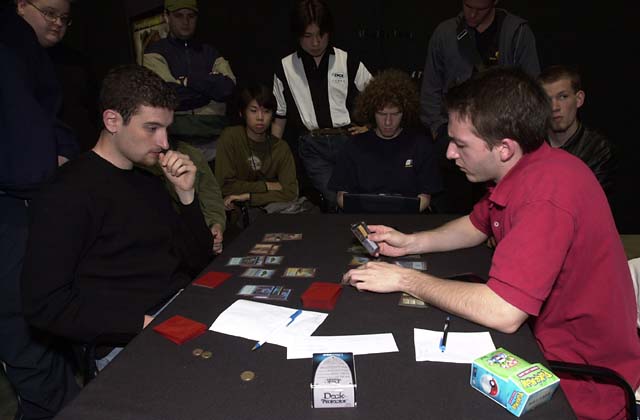 Jon Finkel seemed to be playing the villain as he sat down for this match, what with his black sweater and threatening Van Dyke-style beard. He even had Dan OMS at his right hand, lackeying. This left Benedikt Klauser, his top button rakishly undone, to play hero.

Klauser kept a two-land hand, drawing, and ended up missing his third- and fifth-turn land drops. He cast Worldly Counsel for two, but couldn't find his fourth land. Finkel, meanwhile, had hit six mana with ease, but had yet to play a card.

Finkel let a second Counsel resolve. Klauser came up empty handed. Finkel still couldn't capitalize in an exciting way, merely building his mana base. Klauser Counseled a third time, this time finding his Forest. He played it, and enchanted one of his Islands with Fertile Ground. Finkel Opted into Recoil and sent the land home.

Klauser tried a second Fertile Ground on his next turn, and Finkel played Fact or Fiction in response. It was gangbusters. The cards came down: Fact or Fiction, Galina's Knight, Yawgmoth's Agenda, Spite/Malice and Dromar, the Banisher. Finkel ended up getting everything but the Agenda and Dragon. His newfound Spite countered the enchantment. He untapped and made a Galina's Knight.

Klauser tried an end-of-turn Fact or Fiction, but Finkel, criminal mastermind that he is, was ready with an Absorb. Klauser untapped and played Collective Restraint, which met another Absorb. Finkel failed to laugh maniacally.

Instead, he sawed into Klauser's head with Lobotomy. He was faced with the choice of Collective Restraint, Dromar's Charm, or Global Ruin. Since Klauser was absent white mana, Finkel removed the Restraints from the game.

Finkel lowered the boom with a second Fact or Fiction, this time getting two Islands and a Dromar's Charm. He added a Galina's Knight to his beatdown crew. His third Fact or Fiction a turn later seemed downright obnoxious. Klauser conceded in its wake.

"I lost the first game against William Jensen. I think it's a good sign."
-Benedikt Klauser

Klauser boarded out Harrows, Collective Restraint and Global Ruin to make way for Mana Maze, Lobotomy and Rith, the Awakener. Finkel boarded out Exclude and some Spite/Malice for Lobotomy and Gainsay. He continued to play the part of the Black Hat by grinning ear to ear as Klauser mulliganed, saying "You know the best thing about mulligans? They come in pairs." Klauser found a way to keep his six-card hand.

Klauser cycled a Chromatic Sphere as he brought out a Fertile Ground. Finkel made a Galina's Knight, and then was shown where to go when Klauser busted out Questing Phelddagrif. Klauser smashed in and passed the turn. Finkel Aura Blasted Klauser's Fertile Ground. Klauser cast Fact or Fiction.

The cards revealed were Island, Dromar's Charm, Worldly Counsel, Allied Strategies and Forest. Finkel wasted no time splitting them into lands and spells, what with Klauser having only three lands. Klauser put the lands in his graveyard.

Finkel swung with his Knight and passed the turn. Klauser thought hard, shaking his head. Eventually, he chose to play another Fertile Ground. When it resolved, he passed the turn back to Finkel, who attacked and then Routed the board. Klauser Counseled for two.

Catching Finkel tapped out, Klauser Lobotomized him, taking away Fact or Fiction, and leaving him with three land and another Knight. Finkel drew Dromar.

Still stuck at three land and a Fertile Ground, Klauser cycled a Chromatic Sphere for another Ground hurrying towards the Rith in his hand. He also elbowed Mana Maze into play, effectively locking out The Finkel's countermagic. Finkel played his Knight and started making scooping gestures to his opponent. Klauser untapped and matched him dragon for dragon.

Suddenly, Finkel wasn't in a position to give concession advice. The two beasts traded in the air. Finkel played another Knight. Klauser seemed fazed, but removed it with Dromar's Charm on his turn. He even had a second one back for its twin.

Now things were solidly in Klauser's favor, with Darth Finkel stripped of his clock and Mana Maze protecting his blue and white spells, he was poised to make a big move. He chose to make it Ordered Migration for three. Finkel waited until Klauser's upkeep to Rout them away.

Klauser's Allied Strategies yielded another Rith that Finkel was unable to counter. It hit next turn, and now Finkel made scooping motions for his own benefit. 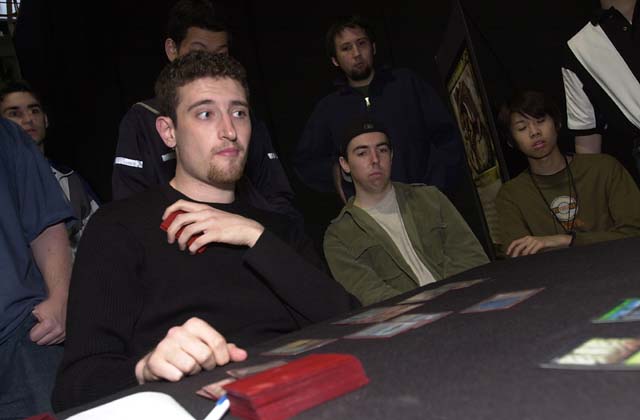 After a quick break to register for the Pro Tour, and under warnings that the building would close in half an hour, the two shuffled for the deciding game.

Klauser went for the crippling Mana Maze early, but Finkel's two land were just enough for Gainsay. While Jon "Wilkes" Finkel played out lands, Klauser built his base a little faster thanks to Fertile Ground.

On Finkel's turn he Opted and made a Knight. Klauser tried to Counsel, and Finkel Gainsayed. Unfortunately for him, this left him powerless to stop Klauser's Mana Maze. Finkel played Yawgmoth's Agenda and held Klauser at bay for a turn with Opt during his upkeep. On his next turn he played Lobotomy out of his graveyard.

Klauser revealed Ordered Migration, Allied Strategies and Lobotomy. Finkel took away his bird farms, forcing Klauser to kill him with Hippos and Dragons. He even went so far as to Recoil his own Agenda, dropping a Salt Marsh and stalling Klauser's blue spells for another turn.

Finkel found another Lobotomy on his turn, this time stripping Klauser's deck of head-surgery. In the process he left Klauser with only Allied Strategies and land in hand. Klauser made use of the card-drawer on his next turn.

The relentless Knight had knocked Klauser to 12. Finkel replayed his Agenda, but had no tools to influence the Mana Maze. This let Klauser get his Questing Phelddagrif into play. He went on to cast Fact or Fiction during Finkel's upkeep, turning over four lands and another Hippo and locking Dr. Finkel (head of the Sinister Six) for another turn.

Finkel Routed the first Hippo away during Klauser's upkeep, the Maze preventing him from casting his second. He was stalled for another turn when Finkel Recoiled his Agenda on his next upkeep. Unfortunately for Klauser, he didn't take note of this fact and put four in his pool before announcing his Questing Phelddagrif. Still, burning for four couldn't squelch his warrior spirit.

He played Dromar's Charm during Finkel's upkeep to gain five life, preventing him from playing spells. On his turn he brought out the second Hippo. Finkel matched him with a Dromar off the top.

Super Hippo took it down when it attacked the next turn, giving Finkel two 1/1s, two life, and a card. Again Finkel went to his Agenda. Klauser hit with his Hippo and lowered Finkel's options with a Worldly Counsel during his upkeep. Finkel attacked with his two baby Hippos and passed the turn. His life advantage wouldn't protect him long.

Klauser looked to cement victory with Restock on his next turn, protecting it from Finkel's counters by responding to it with Worldly Counsel. He got back the fallen hippo and a Fact or Fiction. This last he used to lock Finkel for a turn, and found a second on in the process. 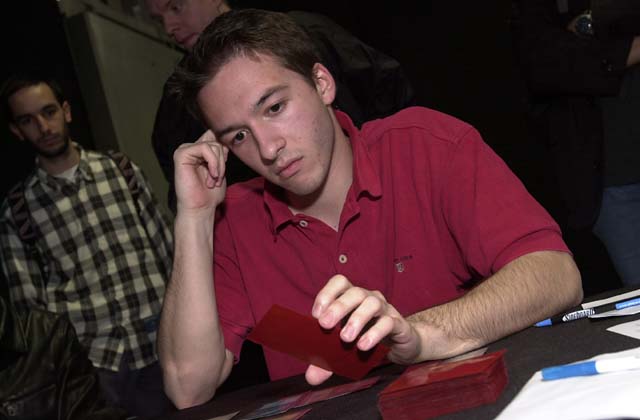 Finkel returned the favor with Dromar's Charm during his upkeep. Klauser kept up the trend with another Fact or Fiction to shut down Finkel's next turn. He picked up a Chromatic Sphere and land. He put the Sphere into play on his next turn, and after a moment's pause, Finkel Absorbed.

There was a brief disagreement over whether or not Klauser had yielded priority, but it was shortly settled in Finkel's favor. Finkel took another Time Walk with Dromar's Charm, and with Klauser out of blue instants, was able to bust out Dromar. He sent in one of his tokens.

He tried another Charmwalk on Klauser's upkeep, but the desired effect was counteracted by Chromatic Sphere. The way was thus cleared for Klauser's second Hippo. His first, suddenly a Pro-Black, flying, 9/9 beast, smashed Finkel to nine and left him with Dromar and seven dudes.

Finkel attacked with Dromar and all but two of his tokens. Klauser's other hippo was able to fly up and gain Protection from Black thanks to Klauser's trusty Chromatic Sphere. Finkel had only one turn left to deal with the twin giants.

He Recoiled his Agenda, and Aura Blasted one of Klauser's Fertile Ground. His henchmen, including Player of the Year Bob Maher, Jr., couldn't suppress a cheer. Finkel contented himself to one pump of the fist. The cantrip had turned up the game saving Rout. Finkel Opted to make the announcing of Rout legal, then swept the board.

This brutal turn of events left Klauser without offensive weapons. Since his library stood at five cards, compared to Finkel's twenty-odd, he extended his hand in congratulations.

Can there be any doubt that Finkel has turned to the dark side? His game three victory centered around black cards (not including the Rout that actually WON him the game): Recoil, Yawgmoth's Agenda, Dromar's Charm and Dromar himself. Not only that, but numerous eyewitness accounts have him sporting profane T-Shirts on the trip to Barcelona. It's only a matter of time before we see him tripping old ladies in his rush to collect his prize check.