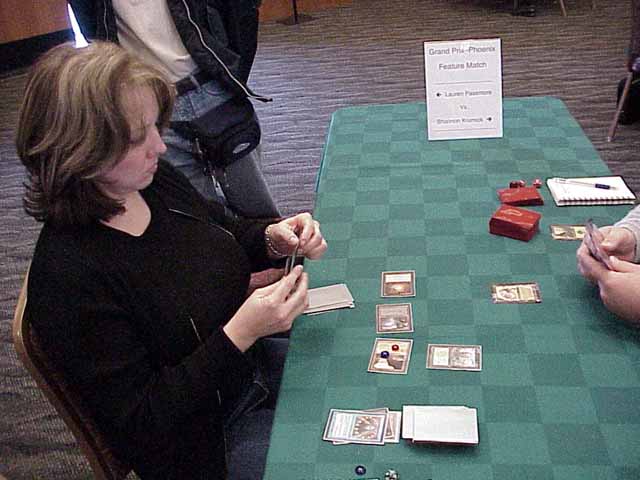 I understand the frustration in playing in feature matches (I was 0-14 at one point in my former life). Lauren Passmore was not pleased with her selection for a feature match in round two. She accepted her fate begrudgingly, and sat down across from one of the better players in the Las Vegas area, Shannon Krumick. Shannon is qualified for the upcoming Pro Tour in Chicago, and Lauren is still doing her best to get on tour. Lauren busted out the updated version of the old 'Trix' deck, using Necropotence and the Illusions of Granduer/Donate combo for the kill, and Shannon came with a somewhat standard issue Stompy deck, complete with Rogue Elephants and Elvish Spirit Guides.

Game one started out pretty normally for both sides, as Lauren won the toss and elected to (of course) play first. Shannon had a typical Stompy explosive draw, with a turn one Rogue Elephant followed by the even more threatening turn two Elvish Lyrist, not to mention a Wasteland. Lauren had some answers though, after a Brainstorm allowed her to s 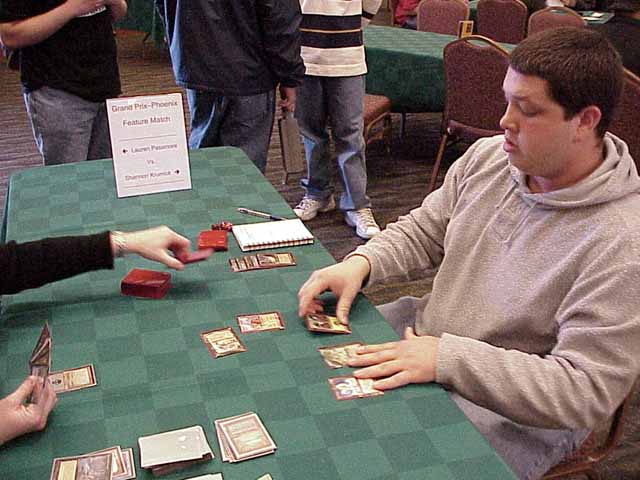 earch her deck a bit, she came up with a turn two Necro, via Mox Diamond, the new replacement for Dark Ritual/Peat Bog. After taking a hit from the two creatures, Lauren found a Firestorm with some help from the 'Skull', and when she dropped a turn four Illusions, a turn 5 Donate was almost a certainty as she was allowed to look at nearly half of her deck by that point.

Game two saw an even more explosive draw than the first for Shannon. Going first, he started with another Rogue Elephant and Wild Dogs via Elvish Spirit Guide. The Wild Dogs ended up getting Force of Willed, and Lauren played the only land in her hand on her first turn, Gemstone Mine. Shannon had a Wasteland for the Mine, and forced Lauren to use Demonic Consultion for a Swamp, while attacking with the Elephant. A turn or two later, Lauren came up with a Contagion for the Elephant, but her lands kept getting destroyed by Wastelands and she was just too far behind to catch up, as another Wild Dogs joined the fray soon thereafter. When Lyrist hit the board for Shannon as well, Lauren was forced to play a desperation Necropotence when she was at four life, but she couldn't find an answer and game two went to Shannon. 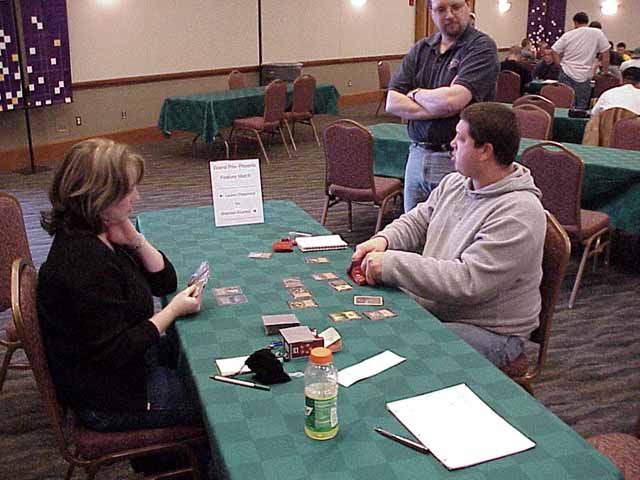 Going first is huge in this matchup, and both players had great draws again in game 3. Lauren found another turn two Necro with a Mox Diamond. Shannon's draw was excellent again, with a turn one Ghazban Ogre and Quirion Ranger (with Spirit Guide). Turn two saw Shannon play another Ranger, and Land Grant with the alternate cost, revealing an Emerald Charm (!) and Giant Growth. Knowing that Shannon held the charm, Lauren was forced to find a counterspell of some type before trying the combo, but try she did on turn 4 as she dropped an Illusions. As Shannon tried to charm the enchantment away, she had the fourth Force of Will (3 had already been removed due to a consult earlier). Even with the 20 life she gained the game was still tight as Shannon kept bringing the beatdown. Lauren managed to Donate the (4 mana cum upkeep at this point) Illusions away, and won a turn before the green swarm would have done her in, as Shannon couldn't come up with four mana to pay the upkeep. Game 3 and the match to Lauren.