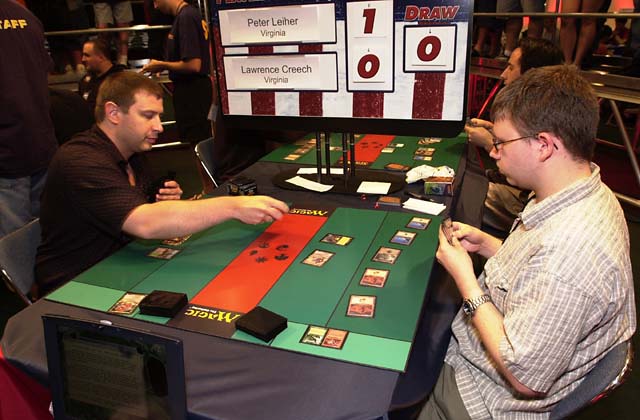 Lawrence "The Creecher" Creech is on pace to take the Rookie of the Year title. Hailing from Virginia, one of Magic's hotbeds, he smoothed his way to the Top 8 at Los Angeles this year. Unfortunately for him he was matched up against his friend and fellow Virginian Pete Leiher. Pete couldn't help but comment on the quality of Creech's deck, an exceptional red-black-blue with multiple Terminates and Excludes. Calls from the balcony came down, calling it "sick", to which Leiher said "His deck's sick? He's sick. That's a sick individual."

Both players were slow out of the gates, with Leiher's Amphibious Kavu meeting Creech's Assault. His second play of Pincer Spider was similarly dispatched, this time with Terminate. Creech tried to hit the offence with Kavu Scout, but Leiher had a kicked Thornscape Battlemage.

Creech had apparently run out of gas, taking a turn to make a Sea Snidd. Leiher had been busy, mustering a pair of Thunderscape Apprentices and a Firebrand Ranger. He offed the Snidd with Strafe and sent his team. Creech softened the blow with an instant-speed Ghitu Fire that took out the Battlemage. He even hit it for one extra for fear of Aggressive Urge. He took four. 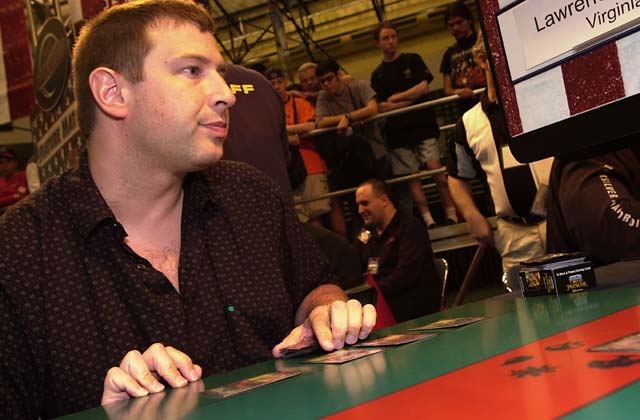 The only defense he could find was a Ravenous Rat that exposed the Urge he so feared. Leiher held out his end-of-turn Raging Kavu like he anticipated the Exclude that Creech showed him. Nevertheless, with two active pumpers making sure he could send, Creech's way was not good. When it failed to improve the next turn, he extended the hand.

Creech went first in Game 2, making a Phyrexian Infiltrator and Assaulting Leiher's Raging Kavu. When Leiher's Shivan Oasis afforded him no play on turn four, Creech traded in for a Lava Zombie. He replayed his Infiltrator the turn after. Leiher took it down with Thornscape Battlemage. Creech had a Hooded Kavu for reinforcements.

Leiher had the tools to turn it around, but Creech took them away and locked them in his gun closet. When Leiher played a Horned Kavu to reuse his Battlemage, Creech had the Terminate to stop him. He had a second one to remove the Pincer Spider that followed. Leiher's last gasp was kicked in the ribs by Creech's Rushing River, pushing through the win.

Leiher began Game 3 with a Quirion Elves that survived long enough to swing. It was joined on the next turn by a Quirion Sentinel and Firebrand Ranger. Creech Terminated one and Zapped the other. Aggressive Urge made the temporary save. The job was finished by Assault. 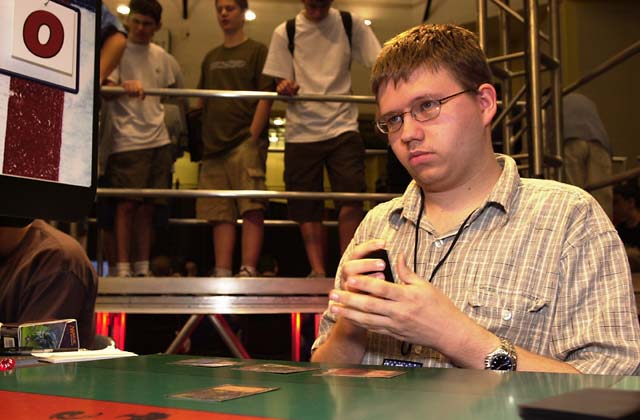 Creech dropped Ravenous Rats that caught a forest from Leiher and traded with his Elves. This left Creech a clean battlefield, to which he added a Kavu Scout. Leiher was ready with the Thornscape Battlemage. Creech had the Exclude next turn for Leiher's Slingshot Goblin and let him have a Yavimaya Barbarian.

Creech tapped out for Kavu Aggressor, which combined with his Nightscape Apprentice to force a race. Leiher had a Thunderscape Apprentice, so the life totals were soon at five apiece. Creech was forced to chump with his Apprentice to skirt death, and his one draw phase turned up pure gold: A Magma Burst that he kicked up to remove Leiher's lone blocker and knock him low enough that his Aggressor would seal the deal.