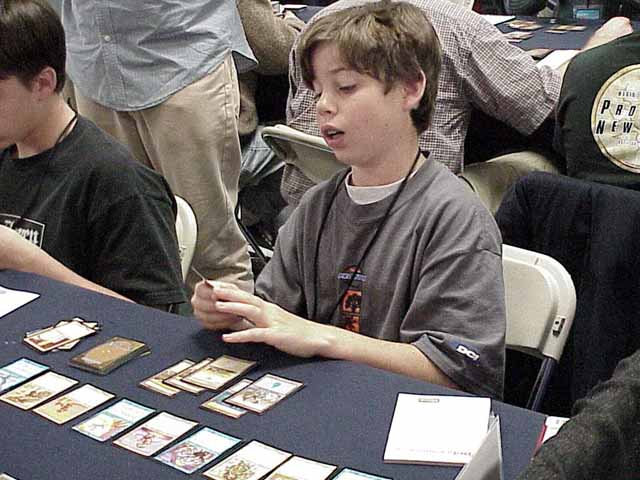 This round a lot of attention was focused on The Parker Brothers. This team who qualified at a PTQ in Florida is a team of three brothers. They are by far the youngest team at the Pro-Tour. In round 1, the youngest brother, Zach Parker who is just twelve years old, had the honor of playing and beating Pro-Tour veteran Alex Shvartsman. This round a good number of people were watching the Brothers to see if they could continue their winning ways.

They were faced off against the Bavarian Nabobs team that consisted of Micha Schulte-Middelich, Jens Petersen and Patrick Minton.

Alex Parker who is the oldest on the team at seventeen faced his Red/Blue deck off against Micha's Red/Black deck. Game one looked fairly even with both players dealing some damage and trading a number of creatures. Micha drew into his Haunted Crossroads which he could use to recycle his Arms Dealer and Kyren Glider to deal four damage to one of Alex's creatures every turn. Micha seemed extremely confident at this stage - Blue/Red has no real way of dealing with enchantments and as such Micha obviously felt that victory was secure. Very quickly Alex found himself without any creatures at all, although his opponent had very little offense either. Alex used a Bargaining Table to draw enough threats to make a move. He played out a couple of creatures to force Micha to sacrifice his Arms Dealer to kill one of them. When Micha used the Haunted Crossroads to draw and recast the Arms Dealer Alex Dazed it forcing Micha to tap one of his last two lands. With Micha now mostly tapped out Alex could use his Volcanic Winds to completely sweep Micha's side of the board whilst Micha could not sacrifice the Arms Dealer. The following turn Alex dropped a couple more creatures and then Thunderclaped the recast Arms Dealer so that Micha would be unable to chump-block. With his next attack Alex was just able to deal just enough damage to kill Micha.

The second game was an absolutely brutal display. Alex played out Laccolith Grunt, Keldon Berserker and Spur Grappler, all the time using his removal to clear out Micha's blockers. In addition to this, clearly fazed by his defeat in the last round, Micha made a couple of costly blocking errors which lost him even more precious blockers. Although Micha had his Haunted Crossroads again, he was unable to get out enough blockers to prevent Alex from taking game two in less than five minutes. 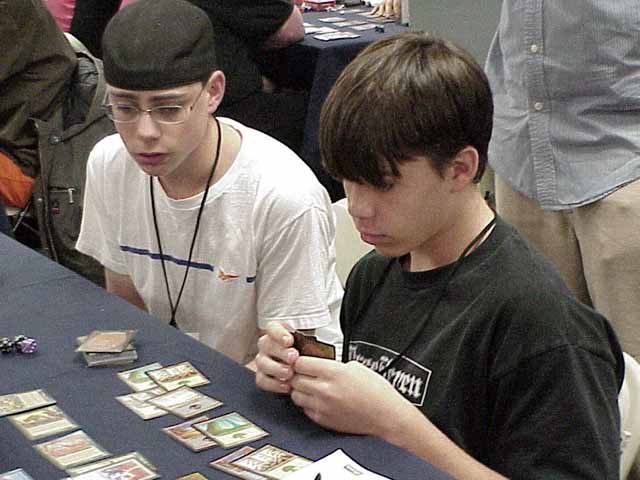 Ben Parker, aged fifteen, played against Jens Petersen's deck. Jens' deck was U/W and was a great deck. It had the Cowardice/Defender en-Vec combo as well as a lot of fliers and a Coastal Piracy, which is very powerful in this type of deck. Game one went to Micha who used his evasion monsters to good effect as he was able to stall the ground against Ben preventing Ben from being able to race him in any way. In game two Jens managed to get out his Cowardice and his Defender but Alex had an answer in the form of Tranquility. This took out not only the Cowadice but a Soothsaying and a Seal of Removal as well. Ben recasts his monsters but it is still looking shaky for him, as Jens is able to erect a sold defense. However when Jens tapped out during Alex's upkeep to Dominate one of Alex's creatures Alex was able to punish him harshly. Alex cast Intimidation making all of his creatures effectively unblockable and so stole game two. Game three was much the same as game two. Alex tried to race Jen's fliers but Jens' used his Coastal Piracy to give him just enough creatures to throw in the way of Alex's huge green fatties.

And so it came down to the youngest brother, Zach. His Blue/White deck faced off against Patrick Minton's Green/White deck. In the first game Zach was very aggesive drawing a lot of cheap creatures whilst Ben had little in the way of blockers. Zach was able to make excellent use of his Waterfront Bouncer to repeatedly bounce his Defender en-Vec which allowed him to attack with all of his monsters, and protect the ones that were blocked. It took only a few turns of this aggression for Zach to win game one.

Game two was a much more drawn out affair. Both players stalled the ground very effectively with Patrick's larger green monsters and Spidersilk Armor holding off Zach's fliers, whilst Zach had his Bouncer, Alabaster Wall and some higher toughness Rebels to hold off Patrick. It looked for a long time like Zach was going to get decked as both players had more than a dozen creatures in play but a lot of Zachs had been searched out with his Rebels leaving him with less cards in his deck. With only three cards left he drew the card he'd been waiting for - Shoving Match. At the end of Patrick's next turn he used it to tap all of Patricks blockers, and then untapped and swarmed all over his now defenseless opponent.