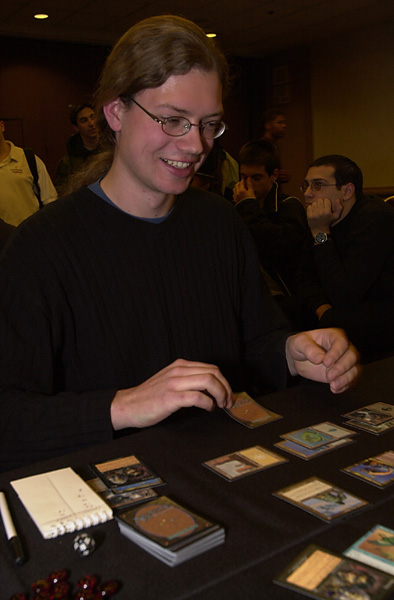 Satoshi was champion at Grand Prix Sapporo and the 1998 APAC, and third at the Grand Prix in Sydney. At the latest World Championship, he placed 24th. Christian's team (Draften und Spielen) came in fourth at PTNY; last year in Chicago Christian placed third.

Both players approached the game with humor and good sportsmanship. They were a pleasure to watch and report on.

Christian won the roll and elected to go first. Satoshi mulliganed once. Christian started off extremely quickly, getting down two Vodalian Zombies by turn three and attacking with both effectively for three consecutive turns. Satoshi put up some initial resistance with Shoreline Raider and Faerie Squadron; but Christian used Mourning and Exotic Curse respectively to keep the pressure on. Faced with a Zombie, Dromar's Attendant, Blind Seer, and Ravenous Rats - and only a small, not-very-Pouncing Kavu for defense - Satoshi concedes on turn eight. 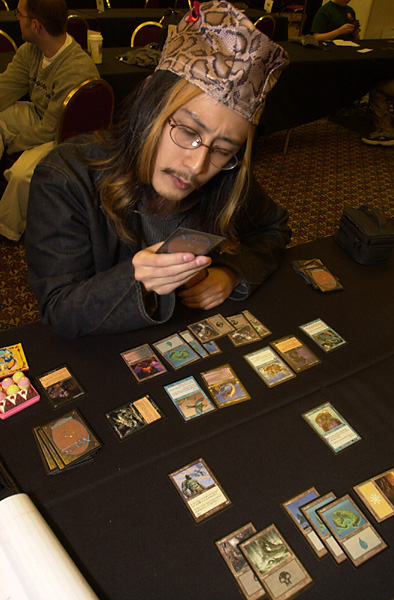 Phase two of this barnstormer started around turn 13, when Satoshi attempted to play a Vodalian Serpent with kicker, Christian Excluded it, and then Christian played a Benalish Heralds. The Heralds went shopping for four consecutive end-steps, and Christian was able to begin a combat push with creatures like Vodalian Zombie, backed up by the Blind Seer. He also uncovered two Mournings, which he used to confound Satoshi's blocking schemes.

In the middle of all of this, Satoshi's Dream Thrush tapped to make white mana to pump the Tower Drake. Christian played Shackles on the Thrush. Sounds innocent, but remember this.

The third and last phase of the game was the trickiest. One play illuminated a rules question: Christian attacked with a Slinking Serpent, Metathran Aerostat, Benalish Heralds, and Vodalian Zombie. Satoshi double-blocked the Serpent with Shoreline Raider and Ravenous Rats. Before combat damage was assigned, Satoshi Repulsed the Heralds. He drew Barrin's Spite off of the cantrip and targeted the last two free attackers (Aerostat and Zombie).

Christian, after consulting with a judge, activated the Metathran Aerostat's ability in response, bringing out the Heralds and returning the Aerostat to his hand. With only one legal target, the Spite still resolved on the Zombie, but Christian had his choice of what he wanted to do with it (bounce or sack). He returned the Zombie to his hand, and Satoshi took no combat damage that turn.

The next turn, the game got wilder as Satoshi played the Phyrexian Infiltrator, with eight mana still open afterward. With Christian tapped out of blue mana, he did the double-activation trick, leaving his opponent with a Shackled Dream Thrush and enjoying a shiny new Blind Seer. (And no, that's not the end of the Shackled Dream Thrush, people. I don't know about these other fancy Sideboard writers, but I won't lead you down the fabled Shackled Dream Thrush path unless there's a big payoff. Stay frosty.) 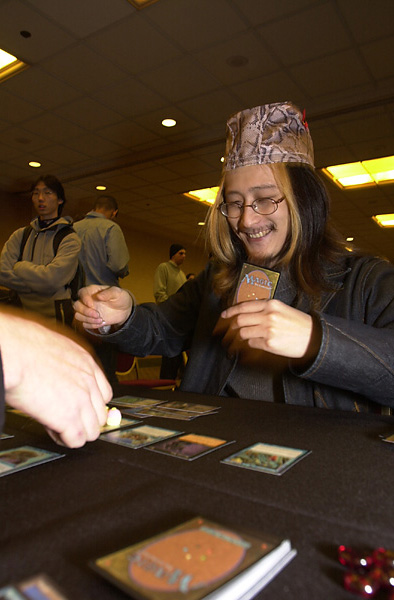 Both sides still had impressive armies when Christian laid down Do or Die. He separated Satoshi's creatures as follows: Blind Seer (stolen), Phyrexian Infiltrator, and Phyrexian Slayer in one pile; a second (unshackled) Dream Thrush, Ravenous Rats, and Vodalian Zombie in the other. Satoshi selected the first pile. Christian then used his Apprentice to tap the Seer, and laid his Mournings down on the other two creatures. Attacking with his full army, he brought Satoshi down to five life.

Because the Benalish Heralds had been such an effective card advantage machine, Christian goes into his next turn (turn #24, for those keeping score at home) with only TWO cards left in his library. He attacks with Zombie, Heralds, Aerostat, Rats, and a newly unshackled Thrush. Satoshi blocks Zombie and Aerostat with creatures in Mourning (Infiltrator and Slayer), and then attempts Infiltrator tricks. He does manage to get the Heralds out of the deal, but Christian has mana open to interrupt the eight-mana trick and reclaim his Blind Seer. Satoshi takes damage from the Rats and Thrush: down to three life. Christian Shackles the traitorous Heralds to end his turn.

Satoshi's snake hat apparently did some stern talking to the top of its owner's deck, because the next draw was the lovely Soul Burn. Mr. Nakamura held the card face up as he considered his options before an excited crowd. Most of those options, he admitted, involved dying on his opponent's last possible combat phase. He did finally find the correct solution: Burn the Blind Seer, gain three life to go to six, keep four mana open for Infiltrator, anticipate four or five damage, depending on what he steals.

Christian turns over his last card: Agonizing Demise. He taps his Dream Thrush...the same Dream Thrush that started the game, got Shackled, traded, and then unshackled...to create a Mountain from one of his Islands. He then plays Demise with kicker to kill the Heralds and deal two damage to Satoshi, bringing him down to four life.

Christian has a Zombie, Seer, Aerostat, and Rats to deal damage, as well as a Stormscape Apprentice to tap. He taps Satoshi's Infiltrator and announces his intention to attack. 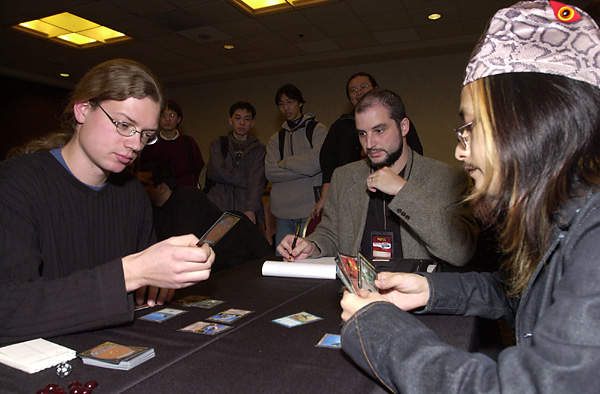 At this point, Satoshi made his only questionable call, letting the attack happen before choosing to exchange the Infiltrator for a creature. (Had he exchanged before combat, he would have had an untapped blocker and would have survived.) He takes the Blind Seer out of combat, but without a blocker, he takes lethal damage. Thus ends an incredibly hard-fought and entertaining game, from both sides.