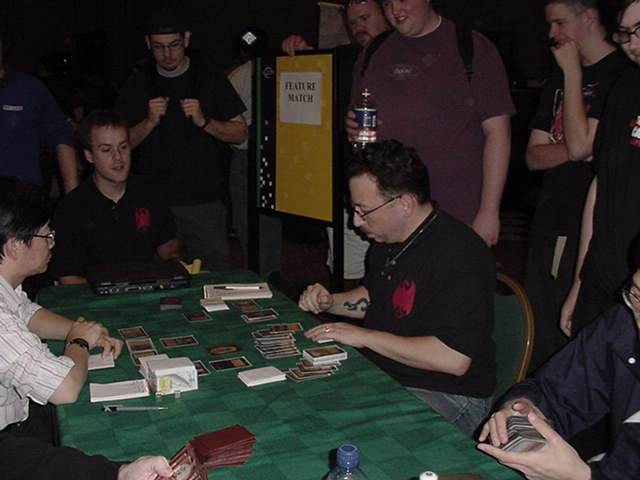 Sheldon Menery is wearing a Your Move Games shirt today, and is playing the YMG "Wild Zombies" deck originally designed by Darwin Kastle for PTNO. Olwen Wee, who says he doesn't want any "dirty Pro Tour points" is playing a G/W/B "good stuff" deck, with regenerating creatures, Pernicious Deed and a variety of control cards. Both players are eligible for Amateur prizes.

Sheldon wins the roll and chooses to play. When he Duresses on turn one and takes Funeral Charm (over Gerrard's Verdict and Pernicious Deed) it signals that his turn-two play is Hermit Druid. The Druid is very powerful in the deck, as Sheldon soon shows. The first activation only turns over Call of the Herd before finding a Swamp, but Sheldon's Zombie Infestation is just waiting for the second activation. When it comes, Sheldon's graveyard suddenly contains three Krovikan Horrors and four Ashen Ghouls, to go with the two Squees already in his hand. Sheldon then uses the Ghouls' ability to put two of them into play. His next attack, with all four Ghouls and a handful of Zombie tokens, is easily lethal. 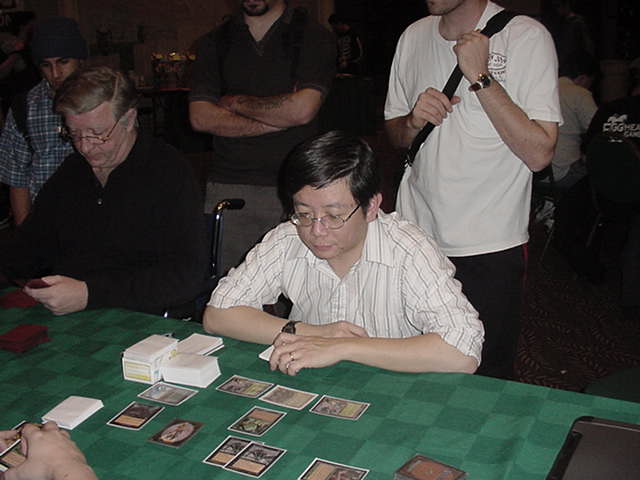 Olwen plays first in game two and leads with a Phyrexian Furnace. Furnace isn't as good vs. Wild Zombies as it is vs. Benzo, but it's still awkward for Sheldon. Sheldon's Duress shows a hand of just land, but including two Wastelands, so the game starts off pretty slowly. Olwen attacks Sheldon's mana base and applies some pressure with a Spectral Lynx. Sheldon plays Zombie Infestation, but with the Furnace out he doesn't want to start throwing things into his graveyard. Sheldon eventually finds a Deed and gets rid of the Furnace, but with only three life to play with. Olwen plays a Mystic Enforcer with five cards in his graveyard. Sheldon does some discard tricks, ending up with a couple of Zombies and two Ashen Ghouls in play, and then casts a Wild Mongrel in hopes of holding off the Enforcer. On his turn, Olwen Diabolic Edicts Sheldon. At first I thought this was a mistake, since Edicting himself would give him Threshhold and let the Enforcer swing over for lethal damage in the air, but he had another Edict, which he cast for the win. 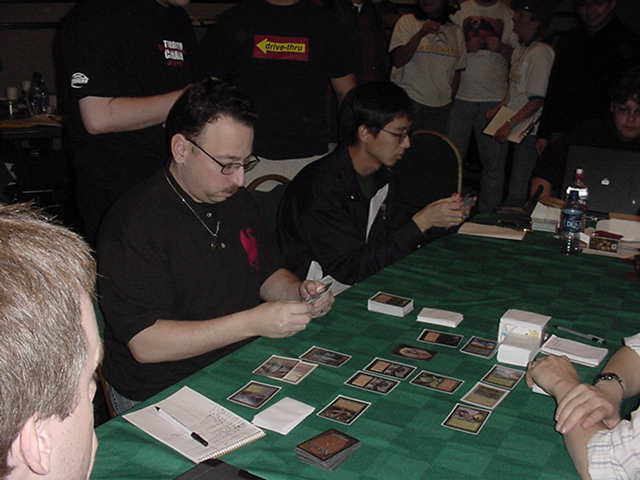 Sheldon makes a very threatening turn-one play of Hermit Druid (removing an Elvish Spirit Guide from the game for the second mana), but Olwen has the Plow for it. The game starts off slowly, with Olwen's Pernicious Deed and Planar Void making life tricky for Sheldon. Sheldon eventually clears the board with a Deed of his own...except that Olwin's regenerators continue to whittle down his life total.

Time is called on Olwen's turn at a point where he has out a Lynx and a Boa with a Deed to back them up. Sheldon has some blockers but is at four life. On the second turn of extra time, Olwen needs to draw a sixth land to win. That way he can Deed for four at the end of Sheldon's turn while regenerating both of his creatures. He doesn't draw it and an exciting match ends in a draw.