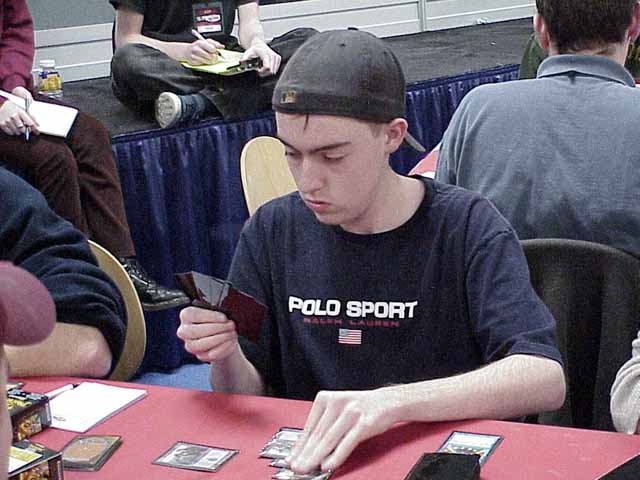 Both teams tied their opponents in round 1. This was a crucial match for both teams, as the loser would probably have to win all of the rest of its matches to make it to Day 2. While both of these teams have been known for trash talking and other controversial behavior in the past, this time all of the players were relatively quiet as they played out their games.

The matches played out as follows: 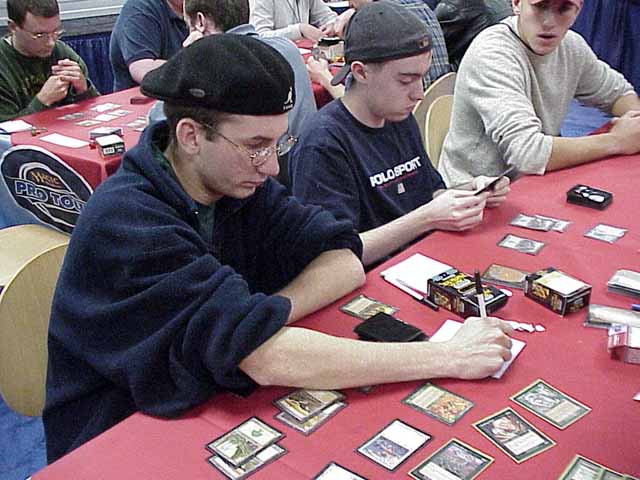 Ed Fear vs. David Bachmann. This match was a battle of green heavyweights, as both players' decks featured some very beefy green creatures. Ed might have had the advantage, as he not only had more green fat (Silverglade Elemental, Snorting Gar, Vintara Elephant, Thresher Beast, and finally Avatar of Might) but also had some good black removal as well. David was playing white as his second color, featuring support cards like Orim's Cure and a sprinkling of removal like Arrest and Afterlife. In the first game, David put out a Voice of Truth and a Horned Troll, but Ed shut them down with a Spidersilk Armor. A Silverglade Elemental with a Treetop Bracer on it got Afterlifed by David, but Ed kept on pumping out fat, and a late Avenger En-Dal couldn't save David from Ed's Avatar of Might. In game two, Ed was stuck at three lands for several turns, and David was able to beat him down with a Nightwind Glider. Ed had to Vendetta a Trap Runner, but David had a Belbe's Armor, which he used to pump up the Trap Runner's toughness in response to the Vendetta, causing Ed to lose a fatal amount of life. Game three saw more fat than a Weight Watchers clinic, as both sides kept casting big, nasty green creatures. Ed commented, "that's an awful load of ship" (apparently "ship" is the latest slang for a big creature) but it was a creature enchantment, Treetop Bracer, which won the day for Ed, as he enchanted a Vintara Elephant with a Bracer and rode the Elephant to victory in game 3.

Joe Weber vs. Nate Clarke. This match was the "blue zone," as both Joe and Nate were playing blue - in fact Nate was playing mono-blue. Joe was also playing white for a very good rebel chain (although he didn't have any Gliders) and some removal. In both games, however, it was one card - Ensnare - that won the game for Joe, as he was able in both games to get a good force on the ground (helped a great deal by rebel recruiting) and then tap all of Nate's creatures with Ensnare. Neither a Predator, Flagship in game one nor a Stinging Barrier in game two were able to save Nate from losing to Joe's horde of rebels. 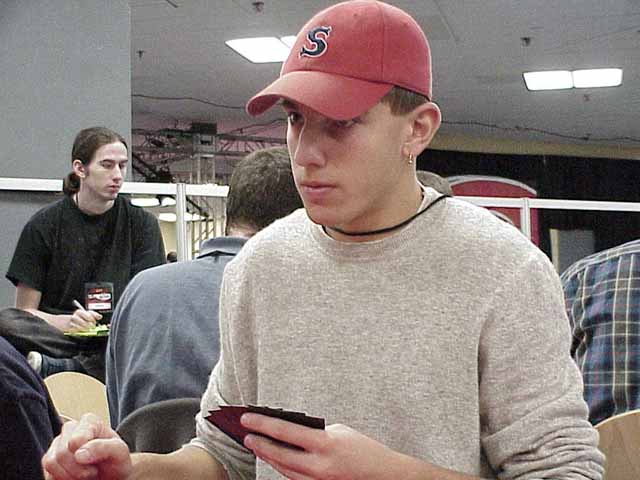 Jamie Parke vs. Mark Le Pine. These games were quick and brutal, as both players' decks featured a large amount of removal. Jamie's deck was blue/red, and had a lot of good red removal, including a Seal of Fire, Flowstone Slide, and perhaps his best card, Ancient Hydra. Mark's deck, which was red/black, mirrored some of Jamie's deck, as it also had a Seal of Fire and an Ancient Hydra, as well as an Arms Dealer and a Two-Headed Dragon. In the first game, it was a 3-1 Flowstone Slide that made the difference, as Jamie got rid of Mark's Kris Mage, Rathi Intimidator and Fen Stalker in one turn. An Ancient Hydra then finished Mark off. In game 2, both players played Seals of Fire on their first respective first turns. Jamie cast an Ogre Taskmaster and started beating Mark down with it, but Mark countered the Taskmaster with his Two-Headed Dragon. Unfortunately for Mark, Jamie topdecked his Ancient Hydra, and the Dragon was only able to get in one shot at Jamie before Jamie shot the Dragon down with the Hydra. To add insult to injury, Jamie then used a Seal of Removal to return the Hydra to his hand then recast it. Mark had no answer to the Hydra and Jamie won the game, and the match.