Round 2 Feature Match: Taking on the Champ

Eisel qualified for Nationals by making Top 4 at Western Pennsylvania Regionals. In Round 2 his fate was to sit down in the Feature Match area across from a man who got an automatic invite: Antonino De Rosa, the defending U.S. National Champion. The banter started immediately. Nick Eisel faced off against the defending U.S. National Champ in round 2.

As the match drew spectators, De Rosa showed he was not confident about his play this weekend, and predicted he would not only not defend his title but be out of the tournament in two hours. Eisel was determined to make his prediction come true.

Eisel hit the ground running with a pair of Llanowar Elves, one of them hailing all the way from the Yavimaya Coast. Seeing the blue mana, De Rosa was already smelling Ninja of the Deep Hours, but nary a one was lurking. Instead, Eisel developed with a 4/4 Cytoplast Root-Kin.

De Rosa was stuck on just a Forest and Brushland, and made a face as he discarded a Wood Elves. He could only watch as Eisel made a Jitte, equipped it to one of his mohawked elves, and swung in.

De Rosa could only muster a desperate Llanowar Elves of his own, which met the business end of a Jitte counter before Eisel even untapped. Eisel crashed in again, and when De Rosa drew a nonland card, he reached for his sideboard.

De Rosa played first, but Eisel had another fast mana start with a turn-one Llanowar Elves. De Rosa showed he was no sitting duck this time, deploying a Watchwolf. 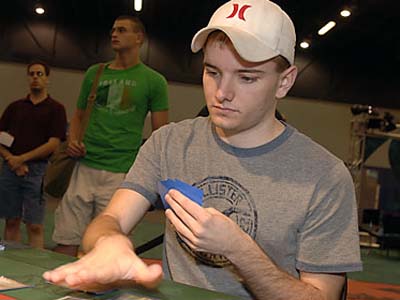 Eisel made a Trygon Predator, which would be good disruption for De Rosa's Glare of Subdual creature-tapping strategy if the Predator weren't itself a creature. For now it was a 2/3 flyer.

Watchwolf got into the Red Zone and got through unchecked, and this time De Rosa developed his mana with a satisfying Selesnya Sanctuary.

Eisel made a move with an Umezawa's Jitte. An active Jitte means more than creature control or a fast clock in this matchup - it's another way for Eisel to control a runaway Glare board. He equipped it to the flyer, swung in and piled up a pair of counters.

The next turn, however, De Rosa untapped into a robust mana situation, crashed in with Watchwolf, and had Seed Spark for the Jitte, making two saprolings in the process. Eisel upped the ante with Kodama of the North Tree, an untargetable threat.

Just in time: De Rosa untapped and dropped Glare of Subdual, sitting on a board of Watchwolf and two saprolings.

Eisel now faced the Predator/Glare problem as the enchantment-eating Predator was tapped down in his attack step. He charged the Red Zone with North Tree anyway, and it crashed into four power worth of Watchwolf and the remaining untapped saproling. He dropped a second Predator, seeing an opportunity to have more Predators than De Rosa had tappers.

De Rosa had other plans, dropping a very large, flyer-killing Arashi, the Sky Asunder - into play, not channeled.

Eisel made a Jitte and attached it to a lingering Llanowar Elves, and got in with it after his Predators were tapped down. De Rosa fired back with a Viridian Shaman on offending artifact, which stung his last saproling on its way out, and a Wood Elves, developing both his mana and his Glare fuel.

Eisel drew his card and took a moment to assess the board.

Eisel made Meloku, and passed the turn at 16 life with De Rosa on 9.

Now it was De Rosa's turn to peruse the board. He looked at his drawn card and said, "That… was a good draw." He meant Eisel's Meloku, not his own hand. He stacked up dice trying to visualize the 1/1 illusion token storm that was undoubtedly on its way. He decided it was time to activate Arashi on Meloku.

"I have to activate it for four, right?" joked the defending National Champion. "I've actually never activated that in my life."

Eisel made three illusions in response, and binned the legend. He untapped, swung in with the illusions and two Llanowar Elves after his Predators were tapped down, and had De Rosa on the ropes at 4. To top it off he made another Predator.

De Rosa, down to a Viridian Shaman, a Wood Elves and a very busy Arashi, played Glare's favorite land, Vitu-Ghazi the City Tree. He then cast Yosei and the Morning Star shed a glimmer of hope on the defending champ.

Eisel was all business. "Attack step."
"Let me figure this out."

De Rosa tapped two of Eisel's Predators. Eisel put a lot of cardboard in the Red Zone: two Llanowar Elves, three illusion tokens and the remaining Trygon Predator. De Rosa lived through the onslaught, blocking a Predator and an Elf and shooting an illusion with a blocking Arashi, going to 1.

After combat, Eisel made a Vinelasher Kudzu and a land to grow on, and De Rosa answered back the next turn with Llanowar Elves, go.

Eisel drew his card and declared, "Another good one." Pithing Needle. In response, De Rosa made a token with Vitu-Ghazi, killed Trygon Predator with Arashi, and tapped down everything. Needle resolved, and Eisel named and subdued the Glare. He passed the turn.

De Rosa drew his card for the turn, and said, "That was one of my outs." He flashed a second copy of Arashi, and described his plan to swing in, channel Arashi for enough to kill Yosei and lock down Eisel's board, then swing in again. Eisel scooped it up.

The players reached for their sideboards again, but both seemed at a loss for what to change in. 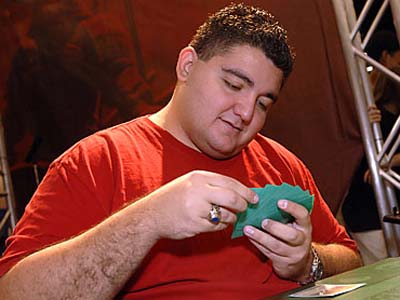 De Rosa: "I don't know if any of my cards are good against you."
Eisel (dryly): "Arashi's pretty good."

Eisel opened with Birds of Paradise, prompting a complaint from De Rosa about his turn-one mana openings … despite having a Llanowar Elves of his own. Eisel wasn't as happy with the 0/1 Birds, saying he would gladly be running Coldsnap's Boreal Druid were it legal for the tournament. Eisel passed with blue mana up, which he used to Mana Leak a Selesnya Guildmage from De Rosa, then passed again.

De Rosa said, "I'll walk into one of your Mana Leaks," and tried Loxodon Hierarch, which met Remand. Eisel had only a Jitte to sit loose next to his zero-power Birds and passed again. De Rosa dropped more land - Vitu-Ghazi this time - and tried again with the Hierarch. It met another Remand.

Eisel made a Cytoplast Root-Kin, threatening to start up the Simic graft-happy gravy train or to have a 4/4 ready to fight the oncoming elephant, and equipped Jitte to it. But De Rosa dropped Viridian Shaman instead, blowing up the legendary fork, and put the rest of his mana into a Wood Elves.

Eisel got in for 4 and went with the graft plan, moving a +1/+1 counter onto his fresh Trygon Predator. But De Rosa had the Glare with three green men ready to meddle with Eisel's board.

Eisel tried to keep things moving with another Root-Kin, but De Rosa dropped an avalanche of high-quality creatures including the lurking Hierarch and a Yosei. As Glare went into tap-your-blockers mode, Eisel offered the hand.