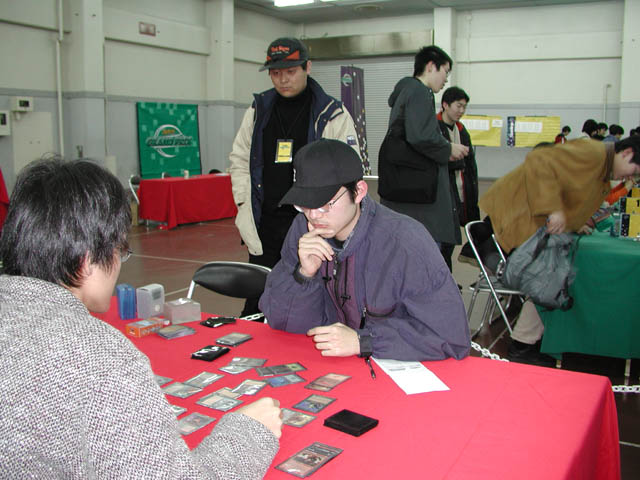 This feature match saw the top player from the Shikoku Area, Takuichi Harino, matched up against little known Takaaki Takemoto. Harino is playing five-color green while Takemoto went with black/red/green and a splash of white.

Harino won the rock- paper-scissors battle and elected to play first, but had to mulligan down to six cards. Harino's 1st turn Thornscape Apprentice was matched by Takemoto's 1st turn Nightscape Apprentice. Harino's 2nd turn forest was not followed by a 3rd turn land drop and it looked like Harino could be mana screwed until a 4th turn Harrow sorted out the mana issues he was having. By this time Takemoto had started the assault with an Urborg Phantom with potential first strike from the Nightscape Apprentice. The turn after Harrow was not as impressive as Harino would have liked, only able to cast a Hooded Kavu. Takemoto played turn five Phyrexian Reaper and turn six Goham Djinn (3/3). When the Hooded Kavu met with a kicked up Agonizing Demise and Harino just seemed to have nothing, he scooped. 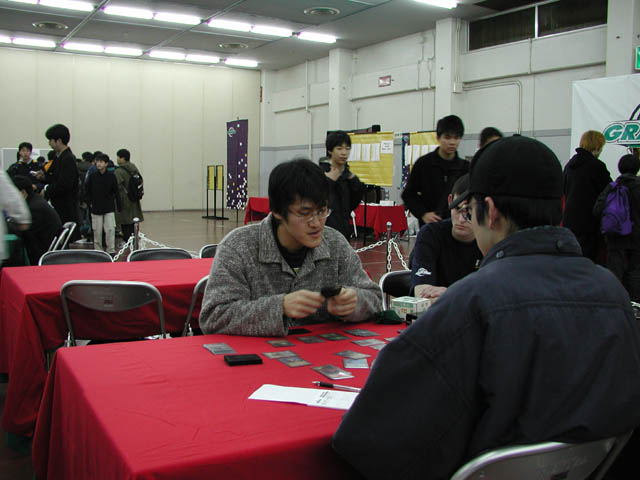 Harino chose to play first and was forced to paris yet again. This is why many players tend to stay away from the five color strategy as often it results in mana problems. Harino's first four turns saw him play a forest, swamp and two mountains, but no spell, while Takemoto again saw his 1st turn Nightscape Apprentice followed by 2nd turn Thornscape Apprentice and a 4th turn Phyrexian Slayer. It was turn five that saw the first spell cast by Harino, a Probe with kicker. Harino discarded Llanowar Knight and a forest, Takemoto binned Zap and Lotus Guardian, keeping an Agonizing Demise and Phyrexian Reaper. The 6th turn for Takemoto saw the Reaper hit the table and Harino played out his Treva's Attendant. Takemoto seemed to have total control as the Nightscape Apprentice was preventing Harino from trading his Attendant for the Reaper. Harino soul burned the Phyrexian Slayer but the Reaper was soon joined by a Vicious Kavu. To make matters even worse for Harino, his attendant was Agonizing Demised which forced him to block the Vicious Kavu. The Kavu was given first strike and his friend Aggressive Kavu joined the party. It looked to be all over for Harino but surprisingly the match turned into a stand off for the next few turns as Harino summoned Sulam Djinn, Goham Djinn and Serpentine Kavu on successive turns. 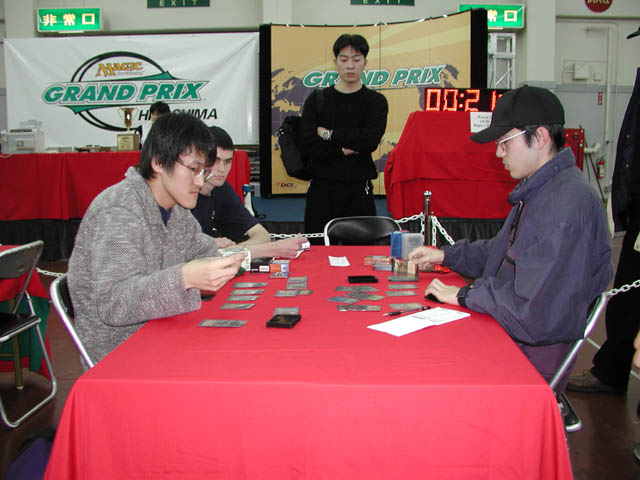