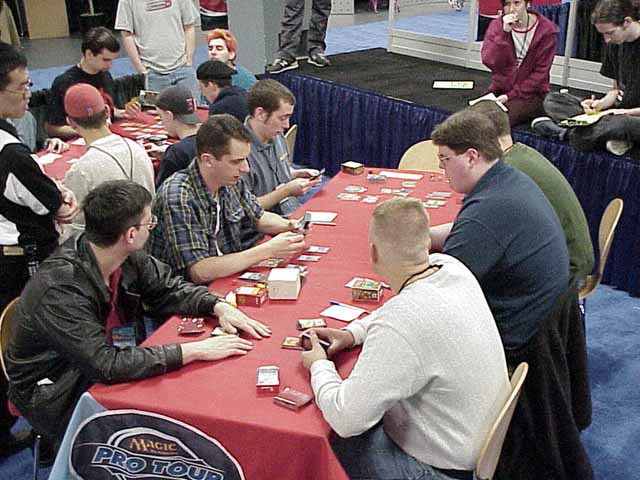 Dave Price put his mono-black Mercenary deck up against Bruce Cowley's Black/Green deck. The first game was back and forth, with Bruce recurring a Blastoderm using his Undertaker, but Dave was finally able to outnumber Bruce's creatures, and used Dark Triumph to bring Bruce to 2. Dave had a Bog Smuggler on the table, and Bruce had no way to prevent the last two points of damage. In game two, Bruce was able to even the odds, gaining the creature advantage and continually attacking. In the final battle, Bruce used his Stampede Driver to pump up his attackers, and Dave responded by casting Dark Triumph in an attempt to at least even the sides. Bruce then cast his second Wild Might of the game on his one unblocked attacker, dealing enough damage to kill Dave. After two hard-fought battles, the third game is somewhat anticlimactic, as Dave casts three of his Mercenaries, plus a Chilling Apparition, while Bruce is only able to play a couple of creatures while drawing useless removal spells like Vendetta and Noxious Field. Dave Price wins, 2-1.

In the middle of the table, Matthew Vienneau played Blue/Red against Kyle Rose's mono-white Rebel deck. Kyle dominated game one, getting out both Rappelling Scouts and Lin-Sivvi, and searching out enough rebels to overwhelm Matthew's defenses. In the second game, Kyle used Muzzle and Arrest to keep Matthew's creatures out of combat, and used his own Rappelling Scouts again, this time accompanied by Jhovall Riders. The key play of the game came when Matthew attempted to use his Seal of Removal to bounce the Riders back to Kyle's hand, to which Kyle responded with Cho-Manno's Blessing, naming Blue. It resolved, and Matthew had no way to deal with the now pro-Blue Riders. Kyle Rose wins, 2-0.

The last match was between Gary Krakower and his White/Black deck, and Donnie Gallitz and his Red/Blue deck. Donnie took an early advantage by playing a Wandering Eye, to be followed by an inordinate amount of blue fliers and red beef. Gary played a Diving Griffin to hold off the Eye, and both sides began to build their armies up. Donnie pressed his attack with two Wandering Eyes and a Stormwatch Eagle, and finally played his Troublesome Spirit with Gary at 3 life. Gary had to play Orim's Cure in order to survive, but Donnie had a Foil and paid the alternate cost to prevent Gary from surviving. The second game again started with a Wandering Eye, only this time Donnie had the Lunge to take care of the Diving Griffin on the other side of the board. Donnie got both Wandering Eyes on the board again, along with a Waterfront Bouncer, which was Snuffed Out. However, Gary could draw nothing but land, and Donnie's forces kept building, finally overwhelming him. Donnie Gallitz wins, 2-0, and Team Baku wins 2-1.