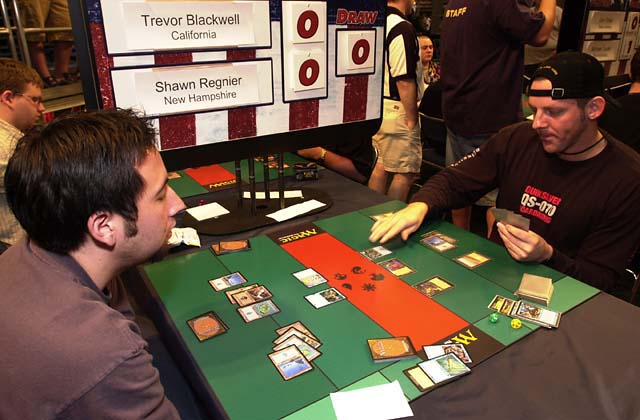 Hammer mulliganed his opening hand, and had apparently already hit a bad luck streak today. While shuffling, he commented, "I guess I should pick up right where I started. I'm glad I scheduled an early flight". Hammer played the first creature of the game in Nightscape Familiar, which was quite lonely until Trevor played the second creature of the game in a fifth turn Hunting Drake. Hammer soon missed his fourth land drop, and was stuck at two Swamps and a Plains. "Great players always have their mana unclumped, do I need to start cheating?" Hammer finally played Island and a Sky Weaver, joking that "It's been stuck in my hand, it's too expensive".

Trevor's Hunting Drake continued to attack through the empty air, and Trevor played his second creature of the game by summoning Stormscape Master. During the end step, Hammer wondered out loud if Trevor had Confound, and played Reckless Spite anyway. Trevor did indeed have the Confound, but Hammer was able to kill of the Master on his turn with Dromar's Charm. This cleared the way for his Weaver and Familiar, and they attacked for three damage. Trevor's Drake continued to attack for two damage, and he played Recover to get back his Stormscape Master. Trevor then played Vodalian Hypnotist and ended his turn.

Hammer swung back with his Weaver and Familiar, and the Hypnotist blocked and traded with the Weaver. Hammer played Nightscape Master, but only had one Island out, and he had no Red in his deck. The Drake attacked yet again, and the Recovered Stormscape Apprentice made its second appearance of the game. At the end of Trevor's turn, Hammer played Worldly Council for three. After some thought, Hammer served with Nightscape Master, and it was not blocked by Stormscape Master. 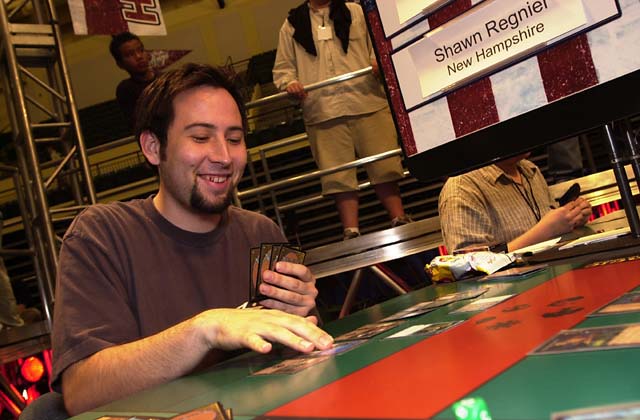 Hammer continued to build up his army with Tower Drake but Trevor killed it off during the end step with Agonizing Demise. Trevor's Drake attacked for yet another two points of damage, and he increased his army with Phyrexian Battleflies and Shoreline Raider. On the following turn, Hammer played Hypnotic Cloud with kicker for one, which is better than usual since Trevor only had two cards in his hand. This forced Trevor to discard Magma Burst, since he had no mountains in play. Hammer then summoned Cavern Harpy, bouncing Nightscape Familiar.

Trevor proceeded to enter a massive attack step, sending over Hunting Drake, Phyrexian Battleflies and Shoreline Raider. Hammer's Nightscape Master blocked the Raider, and his Harpy blocked Battleflies. Trevor pumped the Battleflies once, and after damage went on the stack Hammer bounced back Harpy and went down to five life. This left Trevor with Stormscape Master and his workhorse Hunting Drake, and Hammer with nothing in play. Hammer then replayed his Nightscape Familiar, and ended his turn. The Master was activated at the end of the turn, bringing Hammer to three life. Before Trevor could untap, Hammer Recoiled the Master, but it was countered with Spite/Malice.

Hammer started this game off first and played a second turn Vodalian Zombie. It got through for two damage, and Hammer played Hypnotic Cloud without kicker, forcing Trevor to discard a Confound. Trevor was stuck at two lands, and the Zombie continued to attack. Hammer increased the clock on his mana screwed opponent by playing Urborg Phantom. However, Trevor drew a third land and played a great answer in Plague Spitter. Hammer untapped and played Rushing River on the Plague Spitter, and attacked for five damage. Trevor played his fourth land, giving him four black sources except for his Sulfur Vent. He then replayed Plague Spitter, and ended his turn. 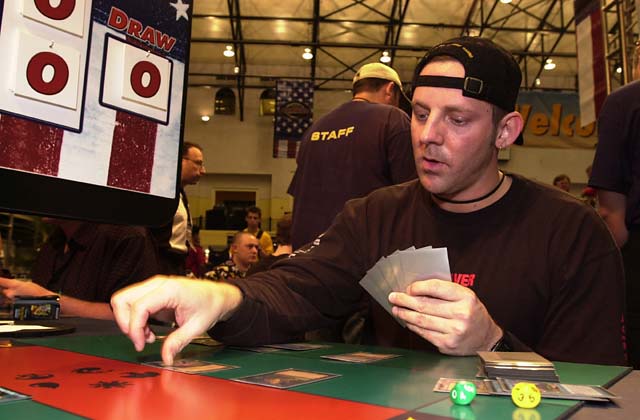 This time, Hammer attacked with only the Phantom. If he attacked with both, the Spitter could block the Zombie and kill off both creatures. Trevor weighed his options and let it go through, taking three points of damage. Hammer then gained more of an advantage by playing Probe with kicker. Hammer discarded Island and Stormscape Familiar, while Trevor discarded Sisay's Ingenuity and a Vodalian Hypnotist. Plague Spitter activated on Trevor's turn, killing off the Phantom, but bringing Trevor down to seven. Trevor then played his own Probe with kicker. Trevor discarded Morgue Toad and Island, while Hammer discarded higher quality cards Recoil and Silver Drake.

On the following turn, Hammer played Nightscape Master and said go. However, Trevor had the answer, and played Exotic Curse on the Master. Still, Blackwell's own Plague Spitter continued to chip away at his dangerously low life total. He played Stormscape Master, and his first mountain of the match. Hammer drew, and yet again ended the turn without playing anything. Trevor then played Recover to get back Morgue Toad, and ended his turn. Hammer attacked with the Zombie, which was blocked by Spitter, leaving only Stormscape Master out. Trevor improved his board position further with the Morgue Toad. At this point, Hammer drew and played nothing for a few turns while Trevor attacked for the win. Hammer conceded and revealed his hand, which contained lands and a useless Reckless Spite