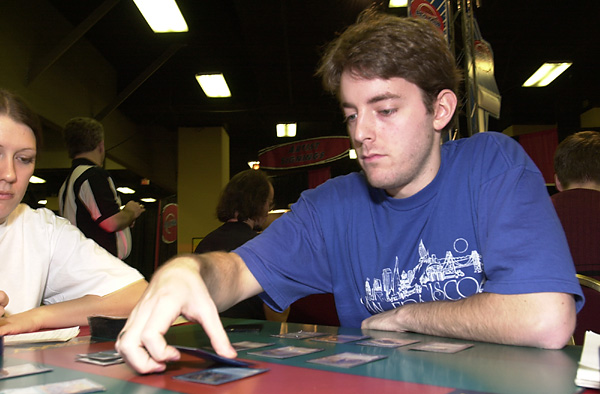 Before the round started, Mark Rosewater explained to the players about the new playing mats WOTC has developed for feature matches. If you haven't seen the new mats, they're green, red, and black. There's a section for land - which is to be grouped in color so as not to confuse the public - a section for non-land permanents, one for your deck and one for your graveyard, and all of these are green. In the middle there's a red section where you move your creatures in to attack and where you put spells on the stack. Finally there's a black section to remove creatures from play in to.

The players were not used to the board and a few times Van Cleave was asked to return his creatures from the red area when they were finished attacking.

Kyle Rose is probably most well known for his championship at 1999 US Nationals and the US Team championship at 1999 Worlds. He's made three top eights at PT Chicago, PT LA and PT London, which he won. He's playing a rogue blue control deck splashing black for Tsabo's Decree and an Air Elemental for the kill.

Trey Van Cleave mulliganed twice. His second mulligan was his fourth mulligan in four games. He cast a first turn Ramosian Sergeant to which Rose nodded his head and said, "I kind of figured that."

After going down to five cards and playing first, it was no wonder that Van Cleave was mana stumbling and didn't get his third land until turn five. He then started searching, first retrieving Defiant Falcon, then Lin Sivvi, then Steadfast Guard. Rose held off the army with an Air Elemental. Rose then started searching for Tsabo's Decree, with three Fact or Fictions, two Accumulated Knowledges and an Opt. When he finally cast Tsabo's Decree he killed eight of Van Cleave's Rebels. After that Rose told Van Cleave, "I think the game might be over."

He was right, and when he started attacking with Air Elemental Van Cleave conceded.

"Gotta be turn one hot pants," Van Cleave said when he played a first turn Ramosian Sergeant. He followed up with Crusade and started the beats. He then changed strategy and instead of searching for more searchers he searched for two Steadfast Guards and continued attacking. Rose cast Accumulated Knowledge and later Fact or Fiction but didn't find help fast enough and scooped on turn five.

Van Cleave peeled Ramosian Sergeant off the top for another first turn drop. He then searched for one Steadfast Guard and cast two more out of his hand. He tried to cast Crusade, but had it Counterspelled. Rose, now at three life, cast Tsabo's Decree that revealed Van Cleave's two Armageddons in hand. Van Cleave then cast Armageddon that Rose Thwarted.

Next turn Van Cleave apologized, "sorry, I'm a bit of a topdecker. I'll play Sergeant." He followed up with Armageddon, Rose Fact or Fictioned in response and finally let the Armageddon resolve. Van Cleave then put two in his mana pool to search for the Defiant Falcon and cleared up his land. Rose conceded and that was the match.