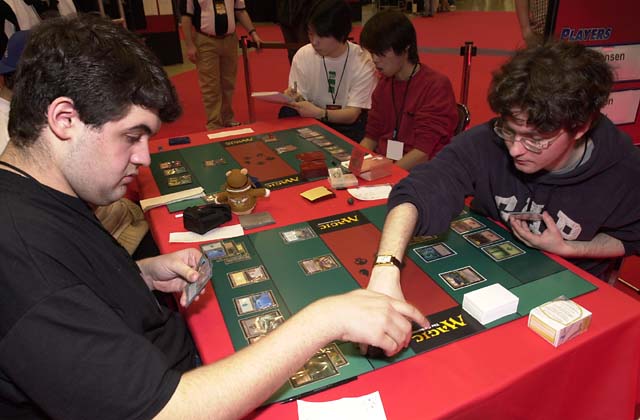 In the second round of 2001 Pro Tour Tokyo, William Jensen of the United States faced Tony Dobson of England. Both players are Pro Tour veterans, and they both have several strong performances. Dobson made the Top 8 in 1999 Pro Tour Chicago, and he also made the Top 8 at Grand Prix Madrid. Jensen is slightly more merited. He won the very first Masters Series, he has won two Grand Prix events and he also has a Top 8 performance from Pro Tour London.

Jensen had chosen to play a five-color deck built around Collective Restraint. With a green base for Fertile Grounds and Harrows, the deck would use cards like Worldly Counsel to take further advantage of having five types of basic lands. The win card of the deck was Questing Phelddagrif, a pretty good creature in the format.

Dobson had chosen to go beatdown. He played a block version of the Fires of Yavimaya deck, going for speed all along. Although the mana curve in block is different from the one in Standard because of the lack of Birds of Paradise, the Fires deck used cheap two-cost creatures like Blurred Mongoose and Yavimaya Barbarian to put early pressure on the opponent. Then, after using the three-drop for either Raging Kavu or Fires, the four-drop slot was occupied by Jade Leech. The deck also held some burn spells that could finish off an opponent.

The Englishman rolled a 20 and chose to play first. His opening hand was very land-heavy, so he opted to mulligan. After shuffling up again, Tony drew a hand that consisted of a Shivan Oasis, a mountain, a Jade Leech, a Blurred Mongoose and a Yavimaya Barbarian, and he kept it. Dobson then played a first turn Shivan Oasis and a second turn Blurred Mongoose.

Jensen's opening had held a plains, a forest, a mountain, a Fertile Ground, a Worldly Counsel, an Allied Strategies and a Questing Phelddagrif, and naturally he kept the hand. After playing a forest the first turn, he then played a plains during his second turn, after which he dropped a Fertile Ground on the forest. 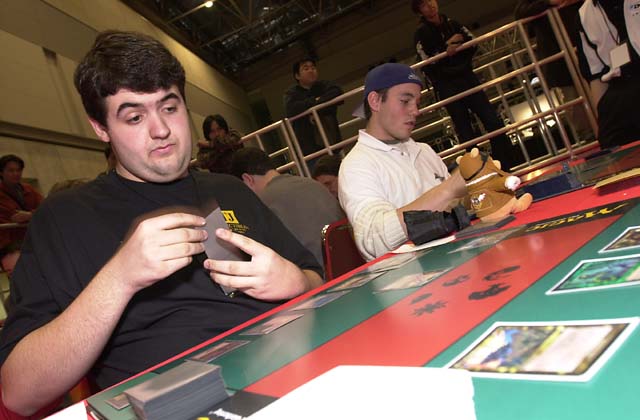 Dobson continued by casting a third turn Yavimaya Barbarian, and the Mongoose took Jensen down to 18. Jensen didn't do anything during his own turn, so the Englishman could attack with both his creatures during the next turn, bringing Jensen down to 14. However, Jensen had plans. During Dobson's end of turn step, he cast sacrificed a forest to a Harrow, getting an island and a swamp into play. He then played Worldly Counsel for four, untapped and played a mountain to get all five basic land types into play. "Hmm," Dobson commented in response to Jensen's mountain, and he got even more worried when a Questing Phelddagrif came into play.

Dobson couldn't do much, so he simply attacked with his Yavimaya Barbarian. Jensen, on the other hand, was on a roll. He attacked with his Phelddagrif, then he played another one. Dobson's Raging Kavu, which he summoned during Jensen's end of turn step, looked kind of puny facing the two hippos.

The Englishman hadn't given up though. He attacked with the Barbarian to take Jensen down to ten, and then he played Fires of Yavimaya. But Jensen's following attack took him down to eight life, and when the American cast Collective Restraint, Dobson took a look at his hand and scooped.

Jensen chose to sideboard out Global Ruins, Worldly Counsels and a Spite/Malice for Routs, Draco and Reviving Vapors. Dobson, on the other hand, felt that Tranquilities could be useful. He also added two Shivan Wurms to his deck.

The second game was pretty quick. Dobson went first, and he got the beatdown start. He cast a second turn Kavu Titan and a third turn Raging Kavu, hitting Jensen for five. Jensen played a second turn Fertile Ground, and then he cast a third turn Collective Restraint even though he only had forests in play.

It didn't matter much, though. Dobson had a Tranquility, and Jensen lost both his enchantments in addition to taking five from the creatures. The American played Harrow during his own turn, and then he played a Star Compass, getting access to most colors of mana. However, Dobson continued the beats in addition to summoning a fifth turn Shivan Wurm, returning the Kavu Titan to his hand.

Jensen, at five life, played a Worldly Counsel for three to see if he could find any answers to the threats. Unable to find anything useful, he scooped.

Jensen chose to play first in the third game, and his opening hand was pretty much perfect. He had a forest, an island and a plains, in addition to a Fertile Ground, a Worldly Tutor and a Collective Restraint. He started by playing a turn two Fertile Ground, and then he got out a third turn Questing Phelddagrif. Dobson had a pretty decent opening hand. He had three lands, a Yavimaya Barbarian, a Jade Leech and two Fires of Yavimaya, but his turn two Barbarian wasn't a match for the Phelddagrif. Turn three, he still played a Fires of Yavimaya so that his Leech would be able to attack from the moment it hit the table.

Jensen didn't want that though. He played a turn four Collective Restraint, and the Jade Leech had to sit back in spite of having haste. Dobson tried to attack during his fifth turn though, but in response, Jensen cast Harrow to get a swamp and a mountain that effectively prevented Dobson's attack. "I won't be doing much attacking," Dobson noted, before playing another Fires of Yavimaya and a Shivan Oasis. 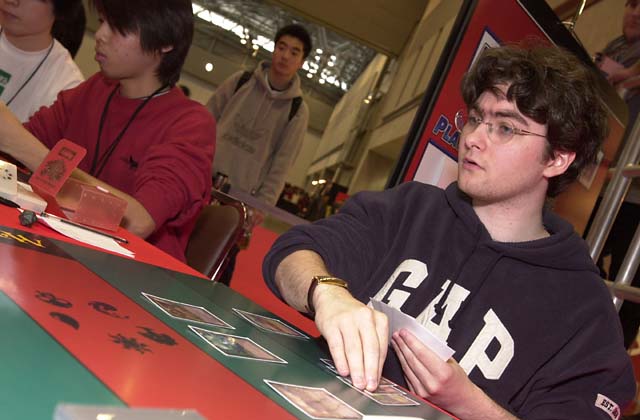 The American cast a Reviving Vapors during the Englishman's end of turn step, getting three lands. During his own turn, he played Worldly Counsel for five and picked a Spite/Malice. So when Dobson tried to attack with his Jade Leech, Jensen first Worldly Counseled for five yet again, taking a Draco. He then Maliced the Leech.

Jensen then sent the Phelddagrif over for an attack before summoning Draco. Things looked bad for the Englishman, and he did nothing during his own turn. But when Jensen gave the Phelddagrif flying and attacked with it and Draco, he attempted to cast Tangle. But Jensen had another Spite/Malice, and Dobson scooped.