'I've got to work out if John was running the bluff - I saw him playing a green white deck in the hotel yesterday. I'm just playing the most fun deck in the format. Again' 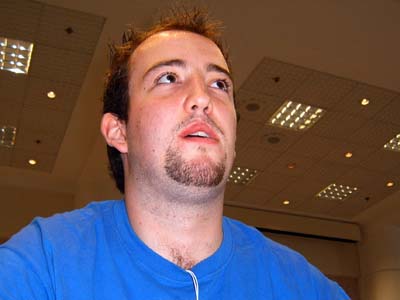 Last year, after grinding into Nationals, Richard Moore went and won Nationals with a white weenie deck he put together only minutes before the tournament. This time he had a good week, having been beaten up by snakes on Magic online, and deciding that it was a lot more fun being the beater than the beatee.

Moore started out with a Sakura Tribe Scout, which powered out a turn two Sosuke's Summons, allowing for some big beats on turn three. When a Jitte showed, with Hopkins still sat on just a Wood Elves, it looked like the champ might be in good shape.

He lost his Jitte to an opposing legendary sword, but quickly replaced it, attacking with 'Evil Dave Humpherys with a Sword' (the Hump who had been pimped at GP Malmo last weekend).

The first big play from Hopkins was Yosei, the Morning Star, but facing down 2 snake tokens, and two Scouts, and a Jitte, he was far from out of the woods. Richard played a Patagia Viper to populate his side of the board further, and passed.

John fought the snakes with the pachyderm of pain, Mr. Loxodon Hierarch, and used Demand to find himself a Glare of Subdual. Unfortunately for Hopkins though, Richard had Seshiro, who made for a concerning amount of beats.

'I'm fine with that if you are' quipped a cheery Moore.

John was down to just 2 life, and surveyed the board with a sigh. He had a little think, but in the face of a collection of snakes, he was forced to scoop it up.

During sideboarding, Richard explained his decision to play snakes.

'We actually have pretty similar decks, only my deck is good against yours, while yours is good against Gruul Beats.' Richard had made a bold metagame call - expecting plenty of control, and it would be interesting to see how this would fare for him.

On the draw, Richard took a mulligan, keeping a risky 1 land hand, with a Sakura Tribe Elder and two Coiling Oracles. Clearly, it was inevitable that he would invoke his National Champion status to get the second land on turn two, and to then hit another off his Coiling Oracle. He did take a few beats in the early turns from a Selesnya Guildmage and Sakura-Tribe Elder, but seemed largely unconcerned, even when Vitu-Ghazi, the City Tree showed up.

Richard gave his Oracle a Jitte, and swung, trading with a Saproling Token, but getting the counters necessary on the Jitte to take down Hopkins' Guildmage.

'The unfortunate thing though, is that you make guys that are sooooo much bigger than mine' declared Richard, just as Yosei hit. Richard fought back with a Coiling Oracle and Sosuke's Summons. Have some of that dragon!

Richard had an ever growing board of 1/1 snakes, thanks largely to Sosuke's Summons but kept seeing colossal threats coming out from his opponent. First Loxodon Hierarch came out to play, then a Simic Sky Swallower made a surprising appearance.

Richard had no choice but to try to swarm around the beaters, and play more guys, including a Patagia Viper, who happily took up the Umezawa's Jitte, that had 4 counters on it.

'Patagia Viper wears the trousers at this party!' announced Moore.

'But it's a sword, not trousers' declared a chipper Pete Norris from a nearby table.

'It's both… part sword, part trousers - just be careful not to mix the parts up!'

The game was looking tricky for Richard, with the life totals at 14 - 7 in John's favour, and a Glare of Subdual signalling all sorts of woes for the champ.

A fresh Birds of Paradise tapped Richard's only flier, and Moore went to 1 following an attack from Simic Sky Swallower. Richard had a Naturalize for Glare the following turn, but didn't have quite enough damage to get in the kill before flying beaters finished him. He had to swing with the team and represent something.

With 6 counters on his Jitte, Moore was at just enough life to survive one attack from Yosei and the biggest untargetable beater in the sky. Unfortunately for him though, a Selesnya Guildmage joined Hopkins' side of the board to pump for the extra points in the air.

For Game 3, Richard had the perfect addition to a 5 land hand - a Sakura-Tribe Scout. His Patagia Viperwould be coming down early, and it would be up to John to find a quick answer off his mulligan.

John had a Birds of Paradise and a Wood Elves to accelerate his mana, while Richard went the snakier route, though is Coiling Oracle didn't hit this time, just giving the champ Sosuke's Summons, before beating in the following turn.

Hopkins was doing better than ever before in the battle to get the most 1/1s in play, with Vitu-Ghazi powering out Saprolings to match Richard's snakes. At least that is the way that it looked, until Moore played a second Summons. As soon as he played a real snake, he would get back the opportunity to make four more.

When Hopkins went for it with a Simic Sky Swallower, Richard had a Voidslime ready. There would be no sky eating today. Meanwhile the slithery beats continued. A Patagia Viper and one of the recursed Summons meant that Mooreo's board was almost lethal. 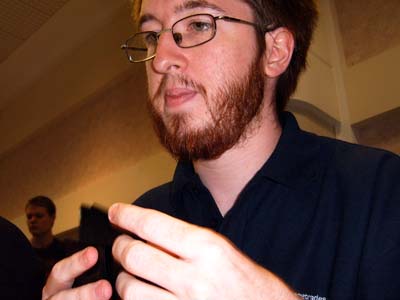 Hopkins had a Wrath of God, but in the face of Summons advantage from Moore, it didn't look overly hot. Richard simply played a Sakura Tribe Elder, Summons and a Jitte. Nice Wrath.

Hopkins tried to fight with Yosei, but it seemed that the most important creature type on the board not only didn't have legs, but didn't have wings either. A Viridian Shaman traded for a Jitte, but it seemed irrelevant - with Richard's conga line of snakes continuing to dance towards victory, with each dead one being replaced by a couple more in short order.

Loxodon Hierarch from Hopkins met with a respectful nod from Richard, who hammered on his deck, declaring 'Come on deck… give me some win conditions… or a 1/1 snake.'

Following a swing from Yosei, the life totals were 11 each, though Rich did swing to try to push ahead. He didn't say ahead for long though, as an Umezawa's Jitte from Hopkins came out to kill off two snakes a turn. With a big clock in the air it didn't take long for Hopkins to dominate in the air.

'I guess I'll just have to beat you in the draft then' remarked Richard, as he drew another non-threat, and extended his hand.