As round two got underway the servers were feeling the strain of all the spectators. Deckbuilding went a little smoother, with the competitors getting the hang of the arcane team-sealed interface. Still, everyone wanted to get the most out of what little time they had to build. The goofy team-up of Gabriel Nassif and Brian Kibler would face the equally-goofy Olivier Ruel and his partner in crime, Jon "Jonny Magic" Finkel.

A surplus of bombs set Finkel and Ruel in their colors quickly, though it took some wrangling from Finkel to convince Ruel to include the ridiculous Righteous Cause. Nassif and Kibler finished their builds quickly, but Finkel still had two cards to cut with what looked like two minutes left to build.

Then the match started. Finkel and his forty-two card deck looked a little ridiculous. As if that wasn't enough, his computer crashed. Just up and reset itself, with the game counting down his clock. Kibler offered to adjourn until Finkel could get his machine up and running again, but five minutes had already been stolen from him.

Kibler kept a forestless hand and ripped Contested Cliffs and then a pair of forests. He started the early beats while Nassif ran interference. Elvish Warrior, morphed Commando and Elven Riders all got ready to tattoo the opposition.

Hystrodon kept Kibler from maximum bashing for a turn, because the solution lay with Nassif's Pacifism. 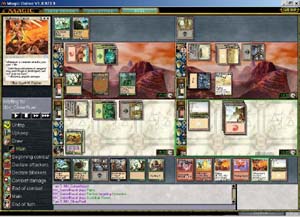 (click to open full-size in a new window)Nassif's Severed Legion was joined by Gustcloak Harrier, and it looked like they might run away with it. Ruel came down with a massive Righteous Cause. The opposition's spirited beatdown was slashed. Kibler found Wirewood Savage, but had no beasts to kickstart his deck.

Meawhile Finkel had cycled Krosan Tusker, and with Silklash Spider holding him back he went through Barkhide Mauler as well. Then he got them both back with Aphetto Dredging. Kibler was dismayed.

He hammered through with his creatures, taking down Finkel's Elvish Warrior with a cycled Primal Boon. While Nassif's evasion creatures worked Ruel he waited for the right time to bust our Rorix. Krosan Tusker solidified Finkel's position while he made ready to get out Centaur Glade.

Kibler and Nassif needed action, and soon. The Tusker took down the Spider with another cycled Boon.

The big dragon hit and hit hard. Nassif's many lands were no help at all. Finally Kibler was drawing his beasts. Death Pulse took an Undorak before the Contested Cliffs could mess things up, but he followed up Finkel's Centaur Glade with Spitting Gourna before swinging in. Finkel made a Centuar to block, and Kibler put it in the Arena with the Gourna. Unfortunately, Embermage Goblin was waiting on Olivier's board to finish it off.

Kibler's last gasp was hoping to get lucky with Erratic Explosion on Rorix. He flipped up Sparksmith. Finkel and Ruel had a good laugh. It's easy to be happy when you play for the winning team.

From that point, Rorix and the Glade were unstoppable. There was one point where, if Nassif topdecked Akroma's Vengeance, they had a chance. He drew Haunted Cadaver.