2 of the World Championships sees France's Gabriel Nassif versus Mike Hron of Madison, Wisconsin, USA. Gab is known for his mastery of Constructed play, including a Top 8 at last year's World Championships, while Mike's big move on the Pro Tour came this year in Geneva at the start of the season, where he became the first American in years to win a Pro Tour.

To determine who was to go first, Gab got two cards from a Legacy deck and shuffled them up.

When Hron found a land compared to Nassif's Force of Will, he joked that they both cost zero. Nassif smiled, and chose to play. 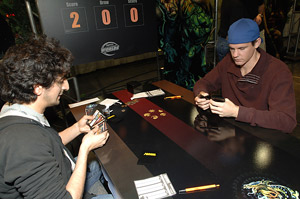 Gabriel Nassif and Mike Hron, both Pro Tour winnersA turn-one Lotus Bloom was soon joined by an array of charge lands from Nassif, while Hron had a Wall of Roots to accelerate out Siege-Gang Commander from his red-green big mana deck.

Nassif played a Spinerock Knoll, hiding something away for later, and passed his first turn with the Bloom in play without playing a spell. The big spells were coming from Hron at this point. He followed up on his Siege-Gang with Garruk Wildspeaker, untapped two lands, and used Into the North to find a Scrying Sheets.

With four creatures on the board that could attack and a Garruk Wildspeaker on four counters, Hron could move in for the kill the very next turn. Nassif had other plans, though, as he unleashed his deck's brutal finish. Two copies of Pyromancer's Swath came down, followed by a Grapeshot for 15 damage. This turned on the ability of Spinerock Knoll. When it revealed a second Grapeshot, Hron scooped up his cards.

On the draw in Game 2, Nassif faced a slightly unusual draw including just one land, but three copies of Rite of Flame. He kept it, but missed his second land drop. A suspended Rift Bolt came from Nassif on turn two, and on turn three, he went for it.