Round 2: France vs. China 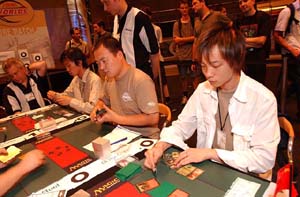 Ruel opened with Carrion Feeder, and Gong had Goblin Sledder. Spark Spray dealt with the Feeder right away, and Ruel summoned Wellwisher. Gong's morph was matched by Ruel's Stonewood Invoker, and Gong's Snarling Undorak traded with a Serpentine Basilisk. The board remained about even, with Ruel's Wellwisher keeping him at a very comfortable life total. Gong's Patron of the Wild helped kill the Invoker and provide a free 1/1, as Ruel unmorphed Titanic Bulvox. This was enough to force another stalemate, as Ruel played a second Wellwisher to gain even more life as neither player was in a position to attack successfully. Timberwatch Elf followed, as Ruel slammed down the dominating creature.

From this position, Ruel was able to attack through with his Bulvox, while his Wellwishers ensured that he was never in danger. In Game 2, Ruel's draw was filled with high end spells, but Gong's draw wasn't much better, as he played his first creature of the game in the form of Symbiotic Elf, and followed up with Totem Speaker. Ruel had a few morphs and a Needleshot Gourna, and followed that with Havoc Demon and Carrion Feeder. Instead of swinging away with the Demon, Ruel sacrificed all his creatures along with the Demon to clear the board, looking to leave only a 7/7 Feeder on the table. Gong had Wirewood Pride to save his Tusker, however, and cast Decree of Savagery to force through lethal damage and force a third game.

Ruel- "Do you really have to report what I just did?" 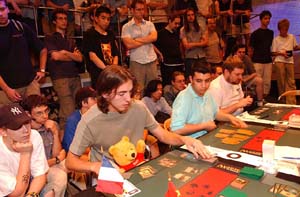 Meraghni was easily able to take down Xu in Game 1, thanks to Skinthinner, Severed Legion, and Snapping Thragg. Xu tried to evade with Covert Operative and Keeneye Aven, but Meraghni's removal proved to be too much. A Cruel Revival to Shoreline Ranger cleared the way for a lethal attack. The second game was more of the same, as Skinthinner, Clutch of Undeath and Torrent of Fire cleared Xu's creatures out of the way. Siege-Gang Commander finished the job, putting France up a match.

Damizet was stuck at three lands against Li, who had a great tempo draw in the form of Aven Farseer and Zombie Cutthroat. Damizet did draw Callous Oppressor, but it was too late and too much ground had been lost. In Game 2, Damizet was able to get the Aphetto Runecaster/Riptide Survivor combo, and Pacified Li's Nantuko Husk. Damizet had plenty of resources while Li didn't have any pressure on the board, so the French Champion's white/blue deck went about the business of stabilizing the board, starting with Callous Oppressor. Even when Li's Aphetto Exterminator killed the Runecaster, Damizet unmorphed two creatures in response to gain back the card advantage. Shoreline Ranger was soon summoned and enchanted with Dragon Scales. Gustcloak Harrier joined the clock in the air, and Li had no fliers to block with. He tried to go for it all with Dirge of Dread, but Damizet had Echo Tracer ready, which helped him survive.

In Game 3 between Ruel and Gong, Ruel got down Death Match, and Gong was stuck at three lands. He finally found a fourth, and was able to kill Ruel's Needleshot Gourna by playing Symbiotic Elf, giving it –3/-3, and having the insects target the 3/6. Reaping the Graves brought it back, and Ruel played a morph to kill Gong's, and Lingering Death would have killed Gong's Timberwatch Elf if not for Nantuko Vigilante. It didn't matter too much, as Gong had activated it in combat, so it fell to a Death Match activation. 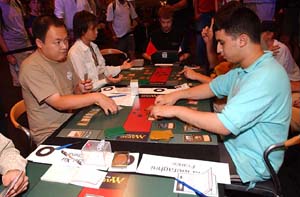 Ruel had the advantage as long as he had the Gourna, which was the only creature on the table with toughness greater than three. Gong made things a bit more even with Elvish Aberration, but Ruel came right back with Titanic Bulvox. Wave of Indifference prevented only the Needleshot Gourna from blocking, so the Bulvox blocked the Aberration. Gong cycled Decree of Savagery, and Meraghni was so angry (perhaps because Gong telegraphed the Decree by only Waving one blocker, and Ruel could have blocked differently) that he actually left the table in disgust. With the help of Accelerated Mutation and Goblin Warchief, which provided creature kill along with an immediate attacker, Gong forced through the final points of damage to win.

In the final and deciding game, Damizet once again went to the air, this time with Gustcloak Harrier and a Seaswift. Li had Twisted Abomination on the ground, and Grassland Crusader would have helped him stabilize if not for Cruel Revival. Li attacked with the Abomination and morph, while Damizet attacked back for five in the air. He then set Li far back in the race, putting Pacifism on the Abomination, and playing a morph. This was enough to slow the Chinese Champion down, allowing the fliers to take care of the rest.