Round 2: Francis Cormier vs. Sam Lau 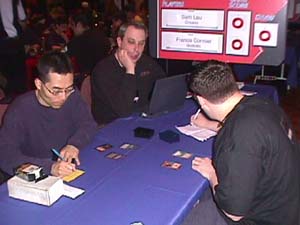 If you pay close attention to event coverage, you may remember Quebec's Francis Cormier as the guy who tried to stop Kai Budde from making Day 2 at Pro Tour – San Diego. Since then, Cormier has been busy helping to shape the current Type 2 metagame.

Cormier, of all people, had a hand in shaping the deck the Eugene Harvey won U.S. Nationals with. Louis Boileau, Cormier's friend and playtest partner, was playing against Mike Turian in Magic Online several weeks ago, and Turian was playing blue-green Opposition, similar to the deck Pat Chapin played to a second-place finish in GP Milwaukee. Boileau bugged Turian for the decklist, and he and Cormier sat down to playtest with it. Their improvement was to add red, giving the deck access to Fire/Ice and Flametongue Kavu. Cormier stayed in touch with Turian via email, and Mike loved the changes. Cormier made top 8 at Regionals with the deck, and Turian made top 8 at Milwaukee. The rest is history.

That said, Cormier is not even playing the Opposition deck, but is with red/green instead.

His opponent, Sam Lau, was part of the Canadian team that came in second in Worlds 2000, along with Gab Tsang, Murray Evans, and Ryan Fuller. Lau, a fan of blue control, is playing traditional Pyschatog, a deck many pundits consider easy pickin's for red/green. We'll just have to see.

Lau started the action with a turn-2 Nightscape Familiar and then passed on his third turn. Cormier cast Call of the Herd on his turn, and Lau could have Force Spiked it. He opted not to, and instead cast an EOT Fact or Fiction, netting a Repulse, a Circular Logic, and a land. He then played a Salt Marsh and a Psychatog on his turn, leaving a blue up.

Cormier cast another Call from his hand. Lau had the Logic, but didn't counter, letting 3/3 token #2 hit the table. Lau Repulsed one token on his turn and attacked for one with his Familiar.

Cormier tried a Firebolt on Lau's Familiar, but Lau Memory Lapsed it. Cormier then cast a third Call from his hand, and I'm sure Lau was quietly wishing for Liquify. He countered the Call with Circular Logic, and then Repulsed the remaining token on his turn. 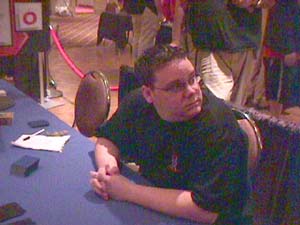 Cormier Firebolted the Familiar successfully on his next turn, and tried to flashback a Call, but Lau unloaded the two Force Spikes in his hand to counter it. Lau put out another Familiar on his turn.

Cormier cast another Firebolt at it (all five spells he had attempted had flashback, a fine strategy versus control), and Lau simply regenerated. Cormier then split a Violent Eruption on the 1/1 and the 'Tog, and Lau removed a few cards from his graveyard to keep the Psychatog alive.

Lau was slowly gaining control with a bunch of Fact or Fictions and then a kicked Probe. Recoil and a pair of Circular Logics dealt with all attempts to flashback Calls, and one big 'Tog hit did Cormier in.

Cormier went first in Game 2, but had to mulligan. His start was still decent, with two consecutive Grim Lavamancers. Lau put out a Familiar on turn 3 with a blue up, but Cormier had Urza's Rage. Lau could only stare at the Force Spike in his hand and shake his head. Cormier put out a Basking Rootwalla, but his Wild Mongrel was Counterspelled.

Cormier attacked Lau down to ten, and tried another Mongrel. Lau was holding at least one Counterspell, but let it resolve, opting instead for an end-of-turn Fact or Fiction. The FoF revealed three land and two other spells.

Cormier: "Did you or did you not miss a land drop last turn?" Lau: "I couldn't tell you that. It wouldn't be fair to either of us."

Lau found no way to deal with Cormier's forces, and scooped after one more draw step.

Lau was holding at least one Ghastly Demise for the entire game, but for some reason never used it. 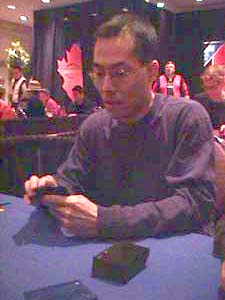 Game 3 started slowly – Cormier put out a Lavamancer on turn one, and Lau Repulsed it on turn three. Cormier then put out a Yavimaya Barbarian and the Lavamancer again, and Lau chose to Fact or Fiction instead of Repulsing the Lavamancer and Demising the Barbarian. He took two Psychatogs over two Islands and a Ghastly Demise since he was holding two lands and a Demise already. The fact that he had played a Cephalid Coliseum on turn 2 made Cormier believe he was scrambling for mana.

Lau put out a 'Tog and Demised the Barbarian. Cormier was forced to try and win by going to the dome; he launched a pair of Firebolts at Lau and then shot him with the Lavamancer. The Lavamancer fell to a Demise, but Cormier kept the burn coming – a third Firebolt hit, taking Lau to 6, but a Violent Eruption was Counterspelled.

Lau Repulsed Cormier's Mongrel twice and then Memory Lapsed it, countered a flashed-back Firebolt, sacrificed his Coliseum, and then swooped in for the kill, pitching everything he had for an exactly lethal 16-point attack.

Does red/green beat Psychatog? Not in the two matches I've seen so far today...