Round 2: Franck Canu vs. Ryan Fuller 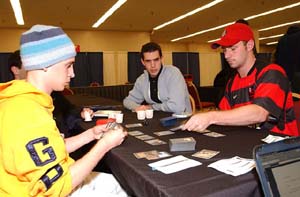 Fuller is running the blue/black Psychatog deck, which is the big story to come out of this tournament. The deck uses the usual assortment of countermagic and card drawing, but also contains plenty of cantrips such as Opt and Peek, which helps feed Psychatog for a massive attack after bouncing potential blockers. Fuller is even running Predict in his version, to get more cards into the graveyard. Canu is playing another surprising deck to emerge today: five color green, with Mystic Enforcer and Shadowmage Infiltrator.

Play was slow for the first few turns, as both competitors played blue mana sources. Canu used Ice to tap down Fuller's land on upkeep, which allowed Call of the Herd to resolve. Fuller drew, tapped out, and Repulsed the elephant token. Canu then answered back by tapping out for Mystic Enforcer. It attacked for the next few turns, while a Llanowar Elf was Memory Lapsed. Fuller played Predict on end step, which was Syncopated. The Enforcer continued to come through for three damage a turn, while Fuller played Fact or Fiction on end step. Canu had another Syncopate, and Fuller had a Gainsay. Yes, Gainsay. In the maindeck.

The piles presented were Memory Lapse/Counterspell and Psychatog, two Peeks. Fuller took the three card pile. A Peek told Fuller that Canu had only an Elf and land in hand, and he wrote down this information, to the confusion and amazement of Canu. Psychatog was played, and Canu responded by pointing to his 3/3 flying, pro-black creature and flexing. The Enforcer came through for three points once again, and Canu flashed back Call of the Herd. Fuller responded with Peek, and saw Canu's one card hand of Birds of Paradise. The Bird resolved, giving Canu another chump blocker for the potentially huge Psychatog. 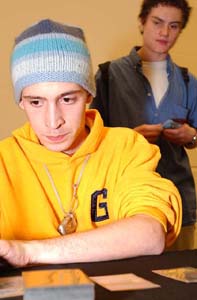 Both players took a great deal of time sideboarding, taking full advantage of the fact that Masters has no time limit. Fuller commented, "That was the hardest sideboarding I ever had to do".

Contrary to what others might tell you, the worst combo in Magic history isn't Necropotence and Anvil of Bogardan before Sixth Edition rules. It's Ryan Fuller and infinite time.

Canu mulliganed his opening hand, as did Fuller. A first turn Bird was summoned, and neither player did anything until Fuller targeted the Bird with Slay on turn six. Canu Counterspelled it, and Fuller decided this was a war worth fighting. He added Memory Lapse to the stack, leaving only a Cephalid Coliseum untapped for mana. Canu then played Gainsay, and Fuller cast Disrupt. The huge stack now resolved, and Slay was countered; a lot of fuss over a little Bird. 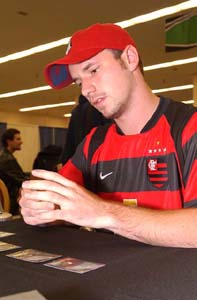 With Canu almost all tapped out, Fuller went to work with Cephalid Coliseum, looking to fill up his graveyard with Psychatog food, and dig into bounce. He played Hibernation to clear the way for Psychatog, ending the game.