Round 2: Fruits vs. Team Butchers Team ButchersTeam Butcher boasts some of Singapore's best players, but the three admit that their collaboration was impromptu. Simply put, former national Champ Sam Lau, and GP Top 8 regulars Royce Chai and Yujian Zhou were the only three interested in making the trip. They had just one bye, so are crossing their fingers. They square off against Fruits (Katsutaka Sugimori, Yuuki Yamazaki, Hidetaki Miyazaki), an aspiring group of rookies who were still flush of their first-round match win.

Chai started off strong against Sugimori, with a curve of bears to the fourth turn. His fun was put to an end when Sugimori dropped Resiliant Wanderer, then sat back on Second Thoughts mana. They stared at each other, neither willing to make a move.

There was plenty of action elsewhere. Lau dropped Stupefying Touch on Wild Mongrel, but was dismayed when Yamazaki showed his second color was blue, not red. A Looter followed, and it seemed that Lau had jumped the gun. Psionic Gift on Mystic Zealot slowed things down. Nantuko Disciple made things a little harder.

Yujian Zhou was on the back foot against Miyazaki. His early Dusk Imp was Afflicted, while Miyazaki used Mesmeric Fiend to steal Faceless Butcher and start swinging with an Imp of his own. However, soon Zhou hit five mana, and started smashing. First Grotesque Hybrid, then Butcher on Repentent Vampier and Ghastly Demise for Dreamwinder. Things were solidly his way.

Unfortunately, Lau's game had deteriorated. He managed to clear Yamazaki's board, but only for an instant. Yamazaki rallied impressivlely with Posessed Centaur and Bearscape. Lau was not out of gas. He spilled Blessed Orator, Aquamoeba and then Cephalid Looter into play, and hoped it was enough.

While Chai and Sugimori stalemated, things were really tight in the Zhou-Miyazaki match. Caustic Tar had Zhou on a huge clock. He had one of his own, thanks to the Hybrid. When Mind Sludge stipped Miyazaki of Laquatus's Champion, he let out a big sigh of relief. But Miyazaki wouldn't just roll over. He topdecked a second Butcher to stop the Hybrid, buying himself just enough time to win with the Tar.

The Fruits were not all so happy. Sugimori had never managed to steady his defences, and Chai's thresholded beatdown of Krosan Avenger, Springing Tiger and Seton's Scout were relentless. Sugimori blocked as best he could, but Sylvan Might and Violent Eruption finished him.

Lau continued to ride his momentum against Yamazaki. With Auramancer and Scrivener bringing back Stupefying Touch and Second Thoughts, he tore through his deck while tearing up Yamazaki's board. Deep Analysis helped, too. Team Butcher was ahead 2-1 in games. 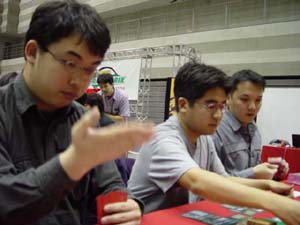 FruitsZhou started the quick beats in his second game. Barbarian Outcast and Crypt Creeper hit while Miyazaki made twin Mesmeric Fiends to steal Butcher and Sickening Dreams. Zhou looked unstoppable. First Petravark on Miyazaki's lone island, then Soul Scourge to bring him to five. But then Miyazaki topdecked the fourth land to play Faceless Butcher, stopping both the Scourge and the rest of Zhou's dorks.

Next door, Lau was getting beaten within an inch of his life. Wild Mongrel, Skywing Aven and Possessed Centaur played his head like the bongos, with Muscle Burst making sure nothing funny happened. Thrilled at his quick win, Yamazaki tried to stay focused for the deciding game.

And just like that Miyazaki took the first match for Fruits. While Zhou drew lands and little else, Miyazaki dropped elbows with Balshan Collaborator and Repentant Vampire. It was closer than it looked, what with Soul Scourge dropping Miyazaki to one life, but an active Painbringer went a long way to making Zhou's situation hopeless.

By this time Chai was mired in his second game against Sugimori. Despite having resolved Breakthrough as Opportunity he had nothing but three creatures on the board, outclassed by Sugimori's Resiliant Wanderer in an encore performance. Sugimori thought he had things in hand, and so attacked, leaving a lone blocker behind. Chai Sonic Seizured it. Sugimori Emboldened. Chai swung, and Sugimori blocked and Emboldened again. Unfortunately for him, this was before damage was on the stack. Chai played Rites of Initiation for four, taking the match.

It all came down to Lau v. Yamazaki. Lau had Yamazaki down to four life, and was gearing up to finish with Beloved Chaplain. However, Yamazaki was high on creatures and swinging into Lau's defences. Lau held up on Kirtar's Wrath until Yamazaki was at two with an empty hand. The two spirit tokens it generated finished him off.