Round 2: Gab Tsang vs. David Rood 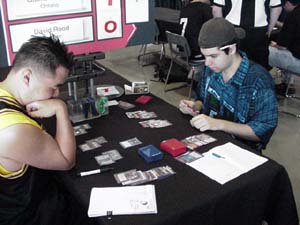 It's the old versus the new here in round two, with veteran Gab Tsang squaring off against plucky young upstart David Rood. These two go way back, working together on numerous occasions. Having stolen Tsang's spotlight of late thanks to his success with 2020, Rood is at the forefront of a new wave of Canadian pros.

Both players started with a pair of islands and Compulsion. Rood followed up with a plains and passed it back, while Tsang showed a swamp and Psychatog. Rood Compulsioned away Deep Analysis and dropped Krosan Verge. Neither player budged for a turn. Tsang cycled through Upheaval and Swamp, then tapped all but one of his lands for Concentrate. Rood allowed it. He untapped and dropped Mirari, protecting it from Circular Logic with Counterspell.

Tsang rubbed his head and thought. He drew his card, then cast Concentrate. 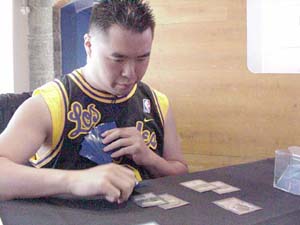 Tsang counted the cards in his hand. Ten. Four in the graveyard, plus one from Psychatog. Eighteen, exactly Rood's life total. He tripled checked it, then went into the Red Zone for the win.

Rood was on the play for the second game and led with an Adarkar Wastes. When Tsang searched out a swamp immediately with Polluted Delta, Rood knew the Duress was coming. He showed Lapse, Analysis, Wake, Wrath and Compulsion with just one other land. Tsang naturally took Compulsion. A Krosan Verge off the top did wonders for his situation, and soon he was at four lands and playing his Deep Analysis.

Tsang Duressed again, seeing the same Wrath and Wake along with now two Memory Lapses. He showed another Duress and took both. Rood's attempt to flash back the Analysis fell to Counterspell, and Rood went to his board with Cunning Wish for Flash of Insight. He passed it back to Tsang who Compulsioned, then Compulsioned again. Rood tried his Flash. Tsang showed him Force Spike. 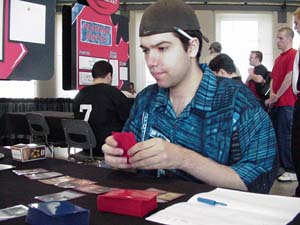 One card drawer could break the card-for-card stalemate. Rood didn't have long, thanks to Tsang's Compulsion. He dropped the Wake, and then Flashed for three. They were all land. The fourth Duress took away the Wrath and left him with nothing.

Tsang worked his Compulsion while Rood tried to peel. Circular Logic for 13 was just enough to stop Rood's attempt at Compulsion. He rescued it with Memory Lapse, to try again the following turn. Sure enough, Tsang had another Logic. Tsang followed up with Concentrate. Rood had no response, cementing Tsang's control of the game.

It wasn't long before Tsang played Mana Short at the end of Rood's turn. Rood had a counter but so did Tsang. Upheaval naturally followed, and Rood extended the hand.