Round 2: Gab Tsang vs. Gary Krakower 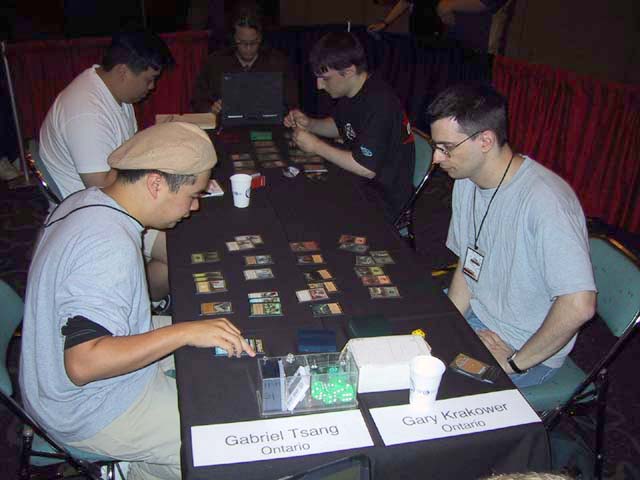 While shuffling, Gary and Gab talked about the Questing Phelddagrif that was counterdrafted away from Gab's deck. Gary commented that he felt bad for Gab, but was happy to see it taken away, since he is playing a deck that is mostly red and black.

Krakower played first, and Gab had a slow start, playing a second turn Treva's Ruins to summon a Samite Pilgrim. Krakower then played Lord of the Undead, while Tsang summoned a second Pilgrim. Gary then built up his army with a Phyrexian Slayer. Gab played a second basic land type, and a Coastal Drake. Thanks to the two Pilgrims, he had the board completely under his control, and Krakower wasn't going to be attacking anytime soon. Gary had a Bloodstock, which could prove to be beneficial if Krakower can get it to trade with a creature in combat.

However, Gab was certainly able to attack without fear. The Drake came through for two points of damage, and an Alpha Kavu came out to further develop Gab's defense. Krakower then was able to deal two points of damage on his attack, and followed up strong with Grave Defiler and Thunderscape Familiar. Still, Gab was ready to stabilize the board. He used Hobble to nullify the Bloodstock. The Drake continued its attack, and was soon joined in the air by Helionaut. This brought the aerial damage clock to three. 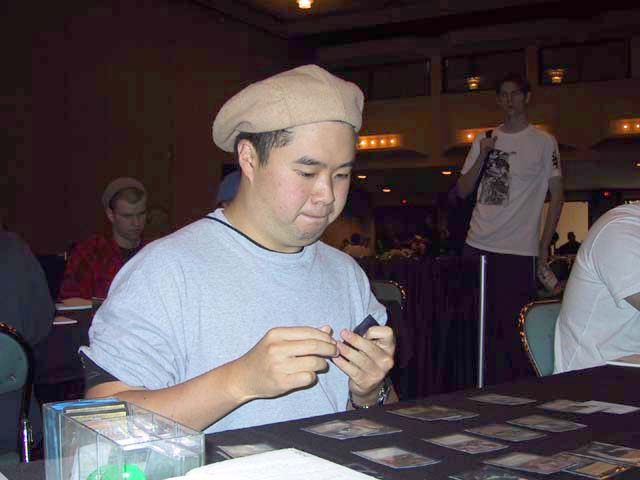 They attacked through the air for a few turns, and Tsang soon drew into his third Samite Pilgrim, which made attacking a very undesirable idea for Krakower. With time running out, Gary used Ghitu Fire to eliminate the Drake, and Gab decided not to use his Pilgrim to save it, keeping it ready in case of an attack. He also had Disciple of Kangee working, which sent Alpha Kavu into the air along with the Helionaut. The pressure was reduced somewhat with Consume Strength, which eliminated Gab's Disciple. Still, Helionaut was free to fly through the empty skies, and was soon joined up by Living Airship. With defeat imminent, Krakower attacked with his whole army, and then played Obliterate to reset the board.

Krakower had obviously been playing with Obliterate in mind, as he made his next five land drops after the world blew up. However, Gab kept up, and summoned a Kavu Climber. It died to a Magma Burst, but Gab kept on the pressure with Coalition Honor Guard. Krakower then summoned Hooded Kavu. The Honor Guard was killed off with Terminate, and Gab summoned Captain Sisay, which soon searched out Treva. It came out on the following turn when Gab drew a blue source, and Krakower had already used most, if not all of his removal. Darigaaz's Charm was used to get back Phyrexian Slayer, which would be used as a chump blocker. However, Gab had Armadillo Cloak, which was enough to convince Krakower to scoop. 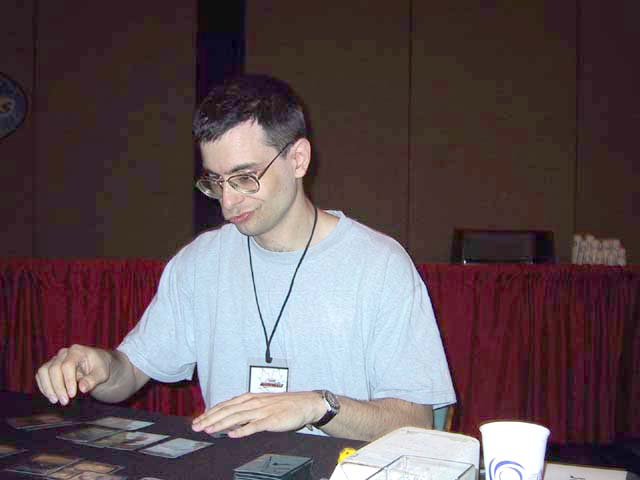 Three swamps were played by Krakower, and he played the first creature of the game when he summoned Lord of the Undead. Gab followed up with Disciple of Kangee. Gary then played a fourth swamp, and cast Phyrexian Slayer. Captain Sisay now showed up on Gab's side of the table, which signaled that Treva would soon follow, as long as Gab had a blue source. Krakower played Volcano Imp, and missed a land drop. Samite Pilgrim was then played by Gab, and Gary decided to attack with his whole team. Sisay blocked the Lord, and searched out Treva once damage went on the stack. Krakower then used Bog Down, causing Gab to discard Jungle Barrier and Living Airship.

Even though he had Treva in hand, Tsang did not have an island to play it. He summoned a Kavu Climber, which gave him another chance to find a blue source. Meanwhile, Krakower's flying army attacked for four points of damage, and the pressure was on. Gab answered back with Armadillo Cloak on his Disciple, which swung the game heavily in his favor. Duskwalker was played without kicker by Krakower, who still did not have a fifth land. The Disciple and Climber attacked again, and Gary sent his whole team to block the Climber. Gab used Explosive Growth to make his Cloaked Disciple bigger, which gave him the win. Krakower then revealed a hand filled with plenty of removal that he couldn't use due to his mana screw.