Round 2: Gabriel Nassif vs. Fabien Demazeau 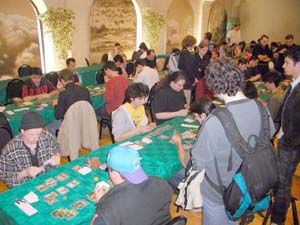 Gabriel is somewhat of a fixture on the Pro Tour, but his opponent is no slouch either. In fact, he was the French National champion way back in 1998, although nowadays his tournament play is generally restricted to prereleases. He has drafted a respectable red-green deck, but Gabriel has a very good red-blue deck with multiple Echo Tracers and Lavamancer's Skills.

Fabian built up his forces with a Nosy Goblin and a Morph, while Gabriel played Flamewave Invoker and missed his fourth land drop. He had the choice of cycling Macetail Hystrodon to try and find land but chose to keep his mana open for his other cycling card. This worked out well as Demazeau dropped a Crested Craghorn and attacked all out, losing all three of his creatures to Slice and Dice.

The favor was returned a couple of turns later, as Fabien's Slice and Dice took out Goblin Sledder and Mistform Seaswift and netted him a couple of insect tokens. Gabriel made a morph which died in combat to a Vitality Charmed insect. Demazeau then made Krosan Vorine, but it could only trade for a morphed Aphetto Alchemist.

Gabriel then made a Warped Researcher and enchanted it with Lavamancer's Skill. Fabien had drawn too many lands, and had nothing to play. Gabriel made a Mistform Wall and put Skill on that too, then started attacking. Fabien didn't draw any creatures capable of surviving, and conceded a few turns later.

This game Nosy Goblin was killed immediately by Gempalm Incinerator. Fabien made a turn 4 Vorine, and exploded Gabriel's Battering Craghorn. This unfortunately put Slice and Dice on the bottom of his deck. The Vorine then traded with a face-down Disruptive Pitmage, and Fabien made a Treespring Lorian.

Nassif only had a pair of morphs and went to 12 from the Lorian. Fabian made a Krosan Tusker and it looked rather good for him. Gabriel double-blocked the Tusker, revealing his morphs to be Echo Tracer and Mistform Seaswift and returning the Tracer to his hand. Fabian kept the pressure up with a Symbiotic Elf.

All Gabriel could do was hold off the Lorian for a turn with his Echo Tracer, but he did find another creature on his next turn, a Flamewave Invoker. He double-blocked the Lorian and again Fabian didn't have any combat tricks – a major problem with his deck – and he also didn't have any follow-up play.

Gabriel was down to three but began to get back in control with a Lavamancer's Skilled Warped Researcher. Demazeau had Naturalize for the Skill. Even so it didn't matter as Gabriel cast Read the Runes for 4 and found a second one as well as an Aphetto Alchemist. The only burn spell in Fabian's deck was the Erratic Explosion he had already played, and Nassif made this death quicker with a Macetail Hystrodon.