Round 2: Gary Wise vs. Masayuki Higashino 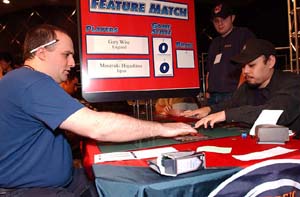 These two players met once before at Worlds 2000, where Wise emerged victorious. There was a bit of irony in this matchup, since a recent Wise Words column sings the praises of Japanese Magic. "I just wrote in Wise Words that I don't want to play against Japanese players anymore because they're getting too good. Now I have to play against one!"

Higashino went first and played a swamp, while Wise drew and showed me his hand, which contained only one land. Things didn't get much better, as he missed his third land drop. Higashino didn't have a fast start either, as he played Diabolic Tutor on turn four- the first spell of the game. Turn five passed and Higashino played nothing, and Wise knew what was coming, as he happily asked, "Beast Attack?" Wise finally found a third land at this point and played Cephalid Looter, but he had a ridiculous amount of catching up to do.

Kirtar's Desire nullified one of the Beasts, and Hallowed Healer came out as well. Higashino brought out Gravestorm, and summoned Leaf Dancer. Aven Windreader showed up on Wise's side, and the game started to seem a bit more even. Higashino brought down a plains, which got a mild complaint out of Wise. "Three colors? Gravestorm and Beast Attack? And I got mana screwed?" Aven Flock was then brought out to hold up the fort for Wise, while Windreader came through for three points of damage. The Beast dealt two a turn thanks to the Healer, while the Windreader did three. This was a very impressive comeback for Wise, who had missed early land drops and even had to discard two cards due to being mana screwed. Higashino brought out Cursed Monstrosity, which was somewhat unimpressive due to Wise's Healer.

Higashino knew that things weren't going to work out his way at this rate, and sent his entire team into the Red Zone. Aven Flock blocked Krosan Avenger, the Windreader blocked Cursed Monstrosity, and Leaf Dancer was unblocked. Damage went on the stack and Higashino played Refresh on the Monstrosity, discarding a land. Wise responded with Embolden, shielding himself for three, and the Monstrosity for one. This forced Higashino to discard another land.

During Wise's main phase, Hallowed Healer targeted the Monstrosity. The language barrier made the situation a bit confusing, and a Japanese judge had to be brought over to sort everything out. Higashino added Afflict to the stack targeting the Looter, hoping to topdeck a land. He did, and the Monstrosity got to live for another turn. Repel cleared away the Beast token, and was brought back by Scrivener on the following turn. The Healer finally killed off the Monstrosity, and the game was quickly slipping away from Higashino. He contemplated attacking with the Leaf Dancer along with the Titan and had a grimace on his face as he tried to figure it out, which got a good laugh out of Wise. The Dancer was merely flirting on the edge of the Red Zone, and Higashino had to decide whether or not to send him into battle. The Titan ended up attacking by itself, and Wise triple blocked it. Afflict helped the Titan survive. 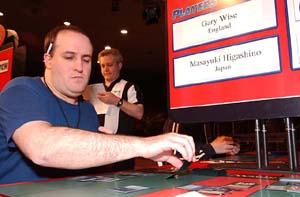 Still, Higashino had no defense for Wise's aerial assault. A large Frightcrawler was dealing only a point of damage per turn due to Hallowed Healer. At this point, Wise was at four life points, and Higashino was at ten. Second Thoughts targeted the Windreader, depriving Wise of his win condition. The pressure was now on to find an answer to Frightcrawler, or lose. Repel put it back on top, but Higashino played a second. This was enough to convince Wise to scoop.

Higashino summoned Krosan Avenger on turn three, and Wise nullified it right away with Kirtar's Desire. Fledgling Imp followed, and Wise answered back with Mystic Zealot. Higashino then attacked with his Imp, and Wise thought for a bit about whether or not he should call Higashino's bluff. He decided that taking two damage was better than risking the loss of his Zealot. Zombie Assassin came out on Higashino's side, while Wise added a second Zealot to his team, but missed his fifth land drop. As if this wasn't bad enough, Wise didn't even have an island. All was not lost however, since Wise's Zealot twins were holding back Higashino's attack.

Werebear was summoned, and Wise finally drew an island, played Psionic Gift on a Zealot, and shot down the bear. The Assassin attacked and Wise blocked with the Zealot. Afflict caused the Zealot to die and allowed the Assassin to live, and Wise was visibly frustrated that he had walked into the trick. Cephalid Looter came out, but Higashino had yet another Afflict to take it down, and Wise simply nodded his head, signaling with his body language that he felt he had made a mistake he regretted deeply when he let the Zealot get killed. Zombie Assassin was sacrificed to take out the other Zealot, leaving the board empty except for Higashino's Fledgling Imp. Diabolic Tutor was then cast, while Wise played Cephalid Scout.

Higashino untapped and played Screams of the Damned, which surprised Wise, who obviously considered it likely that Higashino had tutored up the black enchantment. The Scout got to live for a turn thanks to Embolden, but Higashino was still developing a favorable board position as be brought out Gorilla Titan. All the while, Wise was nodding his head and seemed to be angry at himself. Higashino attacked with just the Fledgling Imp, holding back Gorilla Titan in fear or Second Thoughts. Sure enough, Wise had one, and took out the 2/2 creature. Nantuko Disciple came out, and things seemed to be getting even worse.

The next turn was explosive for Wise. Higashino attacked with both his creatures, and the Titan was Repeled while the Disciple was bounced back with Aether Burst. He then untapped and played Concentrate. Dreamwinder followed on the next turn, and Dematerialize bounced one of Higashino's creatures again, slowing down his tempo further. Once the Titan finally got to attack, it was removed with Second Thoughts. Wise seemed to be on his way to making an amazing comeback just like in the first game, even though he had not won it. The first game comeback was impressive because Wise fought back from mana screw, but this time he was fighting back from a mistake he was obviously distracted by. Still, he managed to keep focus on the game and make all the right plays.

Patriarch's Desire enchanted Dreamwinder and Screams of the Damned was activated for one, and Wise responded with an Embolden out of the graveyard to keep it alive. Higashino shook his head for a bit at the mistake and played a second Patriarch's Desire on the Dreamwinder to kill it off, which got a good smile out of Wise. The next turn shifted the game even more dramatically, as Wise brought out Thought Devourer. The next turn saw Wise Dematerialize Higashino's only untapped plains to play around Second Thoughts. Higashino had tapped his other plains during his turn when he didn't need to, and seemed frustrated by this mistake. On the other hand, he could have very well been bluffing Second Thoughts.

Wise decided to play it safe, and attacked with just the Aven Flock, leaving Thought Devourer back on defense. Scrivener brought back Repel, and Higashino played Beast Attack on end step. Wise took a deep breath and sighed, shaking his head. He jokingly yelled at Higashino "Jerk! Mean!" Scrivener chump blocked the Beast, while Repel put a 1/1 Frightcrawler on top of Higashino's library. Higashino then used Screams of the Damned multiple times, forcing the game to a draw. Wise had a relieved and stunned look on his face, as he obviously felt that Higashino had the upper hand in this game.

While shuffling up for Game 3, Wise turned to me and let me know that blocking the Assassin with the Zealot and walking into Afflict was an awful play, and didn't mind admitting that it was a bad mistake.

Higashino mulliganed his opening hand, while Wise had a near optimal draw. Cephalid Scout came out turn two, while a Looter was summoned on turn three. Higashino had Frightcrawler and Krosan Avenger, but was slowed down by Angelic Wall. Wise activated his Looter looking for the fourth land he needed to summon Thought Devourer, but couldn't find it. Afflict killed off the Looter, and Wise drew the land he needed, and brought out the 4/4 flying monster. Higashino leaned back in his chair a bit, and let out a sigh. Nantuko Disciple came out to help him bust through, but Wise had all the answers. Kirtar's Desire enchanted the Avenger, and Aether Burst bounced back the Disciple. 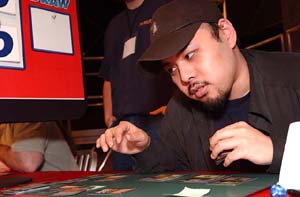 Tattoo Ward was then played on the Avenger, which destroyed Kirtar's Desire. Wise answered back with Aven Cloudchaser, which took out the Ward. Second Thoughts took out Thought Devourer, but the Cloudchaser and Scout were still bashing through the empty sky for three damage a turn. Scrivener brought back Aether Burst, and Patriarch's Desire killed off the Cloudchaser. Mystic Zealot now came out, and would be huge next turn thanks to the Scout. Higashino brought out the Disciple and Fledgling Imp. They double blocked a Zealot, and Wise chose not to sacrifice lands to get threshold. Instead, he let it die and played Scrivener, bringing back Aether Burst.

Afflict took down the Scout, and Scrivener and the Imp butted heads, with the Scrivener coming back with damage on the stack. Psionic Gift was then played on Angelic Wall, giving Wise the game.

Once the match was over, Wise confirmed that he thought he wasn't going to win Game 2, and was surprised that Higashino chose to make it a draw. He also wondered about the turn in that game where he Dematerialized Higashino's only untapped plains to play around Second Thoughts. Through a translator he asked if that was the case, and Higashino confirmed that he did not have it in his hand at the time. Wise let him know it was a good bluff, but didn't know if he could express that to Higashino through the translator. "Is there a Japanese word for bluff?"