Round 2: Gary Wise vs. Noah Boeken 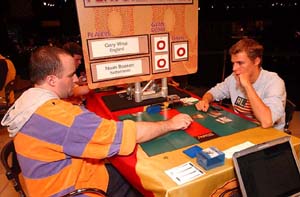 It could be said that England's Gary Wise has more personality than he knows what to do with. Outgoing and outspoken, his love of the game is matched only by his fierce competitiveness. That intensity combines with a talent that has given him strong finishes this season.

His opponent, Noah Boeken, seems quite the opposite. Laid-back and sometimes goofy, his distracted attitude only serves to conceal his great skill at the game. Between him, reigning World Champion Tom van de Logt, and Kamiel "The Glacier" Cornelissen, it's no wonder the Dutch are the odds-on favorites to take the National Team Competition.

Despite Boeken's association with Wise's nemesis Ryan Fuller, Wise assured him that there would be no animosity this match. Boeken agreed to the spirit, but couldn't hold back a sly smile.

"But when I'm about to smash your face, I'm gonna say 'This one's for Ryan!'" - Noah Boeken

Boeken won the die roll and chose to play. Wise sent back his first hand with a scowl, and his second wasn't much better. His turn-two Mongrel met Counterspell. Boeken put up a Familiar while Wise made a replacement.

Boeken tapped three on his third turn for Fact or Fiction, not having played a land. It was a good one. Darkwater Catacombs, Memory Lapse, Circular Logic, Flametongue Kavu and Psychatog. Wise offered Counterspells and a land. Boeken took Flametongue and Psychatog. Urborg Volcano was ominous.

Wise smashed in and made an Arrogant Wurm. Flametongue took it down. Boeken had the mana left over for Psychatog. All Wise could manage was Merfolk Looter. 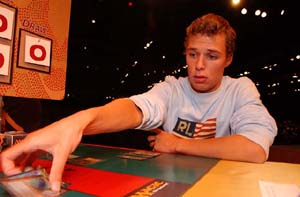 Boeken's next turn was brutal. The Flametongue walked in and traded with the Mongrel. Deep Analysis gassed him up twice, leaving just enough left over for Fire to wreck the Looter.

Wise commented that his deck had tested 80% first game against Boeken's design. Boeken disputed that, but things heated up when the discussion turned to football. For Boeken, the discussion was closed.

"England is very bad at football." - Noah Boeken
"We made the World Cup!" - Gary Wise
"We knew we wouldn't win it, so we just didn't go." - Noah Boeken

Wise's hand made up for Game 1. He started with Basking Rootwalla and Wild Mongrel while Boeken failed to find black mana. He hit for five on his third turn, and on his fourth used Mongrel to make an Arrogant Wurm. Boeken Lapsed. Wise thought for a moment, but let it resolve, pitching Deep Analysis for more damage.

Boeken untapped and tapped out for Flametongue Kavu. That prompted Wise to turn over a Circular Logic. Boeken double-checked the board, and scooped.

Boeken had to put back his first seven. He was not pleased.

His stuck with his next six. Wise also frowned at his opening draw, five lands, Seedtime and Mongrel, and decided to risk a mulligan of his own.

While Boeken dropped a pair of Urborg Volcanoes, Wise was getting busy with Basking Rootwalla and Aquamoeba. However, he didn't have a third land. He made a Mongrel and passed it back. Boeken, having found an island, was able to Repulse at end of turn. He then dropped Flametongue to dispatch the Mongrel. 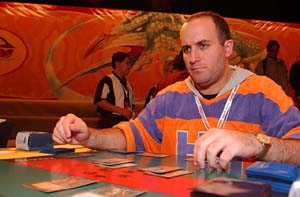 With a huge grin, Boeken revealed his two-card hand of Fact or Fiction and Flametongue Kavu. Wise looked down at his two land and thought. Boeken was already offering the hand. Wise could only laugh as he looked at the brutality.