Round 2: Gary Wise vs. Tomi Walamies 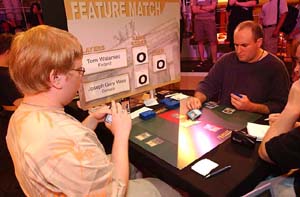 As I got to the table it seemed like I was going to have to pick another because the two players were discussing the possibility of an intentional draw. They were both playing Blue-Green Madness and felt that Goblins—a deck sported by a significant portion of the field--is a terrible match-up for them. A draw would land them into a bracket with slower control decks that would feature more advantageous match-ups and almost zero probability of running into goblins.

Tomi was keener on the strategy than Gary and the Canadian wanted to wait and see how the games started to unfold before making his decision. It turns out that Gary is less than confident in his Extended decklist and wanted to squeeze as many points out of the Standard portion as possible.

Tomi mulliganed on the draw and kept his subsequent hand with a frown. When he played a Rootwalla and two Forests as his only permanents all game the reason for the frown became apparent. Gary had the Aquamoeba and the Arrogant Wurm on turns two and three and he needed little else to defeat the frowning Finn.

Both players kept their opening hands and Tomi cast Quiet Speculation on turn two for a pair of Deep Analysis and a Roar of the Wurm. Gary answered with Wild Mongrel but Tomi had the sideboarded Stupefying Touch.

That suited Gary just fine as he played out his sideboarded Callous Oppressor. When Tomi named 'wurm' Gary laughed, "Shocking!" After Gary went through the motions of writing out a scrap of paper with the word 'wurm' on it, Tomi Unsummoned it with a grin. When he flashed back the Roar he was able to use the scrap of paper as his wurm token. 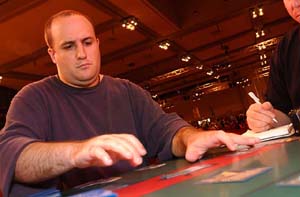 Gary was not willing to relinquish control of the scrap of paper though and used his own Unsummon on the Wurm and replayed the Oppressor. Tomi named Wurm again and Gary triumphantly reclaimed the scrap. Tomi could have named anything because he had another Stupefying Touch ready and enchanted the cephalid and played an Aquamoeba. "He's a beater," shrugged Gary.

Gary dug into his deck with a Careful Study and discarded a pair of lands. Krosan Reclamation shuffled the Deep Analysis's back and he sent his two creatures into the red zone—effectively a Woodland Druid and a Grizzly Bear—and the Mongrel bounced off of the 1/3.

Tomi pitched a Wonder to his Aquamoeba and attacked for three in the air. After combat, he pitched a Roar to switch it back and forced the creation of a second scrap of paper to be inscribed with the word, 'wurm'. Gary was out of gas and passed the turn back with no play.

When Tomi attacked, Gary shrugged and said, "Okay, I'll go through the motions." And attempted to shuffle the Wonder and the Quiet Spec back in with Krosan Reclamation. Tomi pitched a card to his Aquamoeba and hardcast Circular Logic for one more mana that Gary had available. He took nine in the air and when he drew nothing that could help him on the next turn they advanced to Game 3.

Gary was either very confident in his sideboard for the mirror or very nervous about his Extended deck because he didn't even broach the subject of the draw. If he was waiting for Tomi to revive the topic there was nothing coming from that side of the table. Gary carefully wished his opponent good luck, "I want you to have a better game than Game 1 and for me to have a better game than Game 2."

Gary opened up with Careful Study and threw away another Careful Study and a Roar of the Wurm. Gary's second land was a Centaur Garden and took a point to cast wild Mongrel. Tomi played a pain-free dog of his own.

Gary refrained from a dogfight and kept his Mongrel back and cast Quiet Speculation for a pair of Roar's and Krosan Reclamation. Gary took more pain from his Centaur garden choosing to keep a blue untapped for an Unsummon. Tomi got in for two with his Wild Mongrel when Gary chose not to block. 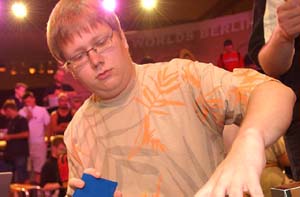 Gary flashed back a roar token only to have it Unsummoned EOT. Tomi discarded his own Roar to pump his Mongrel and flashed it back during the second main phase. Gary had an Unsummon on his turn and flashed back another Wurm, he attacked the soon-to-be Texan down to eleven.

Tomi dug with Deep Analysis—passed through the gastrointestinal tract of his Mongrel first—to find another Unsummon and was successful in making Gary's wurm go away. He took Gary down to eight and played an Aquamoeba. Gary cracked back and took Tomi down to ten. He fell to seven from his Centaur Garden choosing to keep two blue open rather than a green for Krosan Reclamation.

Tomi pitched Wonder to his Aquamoeba and went in for the kill. Gary obviously had no blocks and Tomi pitched his hand save one card to do the necessary damage but Gary had an Unsummon. When Tomi tried to cast a Roar, Gary used his remaining U to cast Circular Logic to prevent Tomi from having any blockers. He was able to finish him off with the help of the Centaur Garden on the next attack.

As Gary extended the hand he apologized for not accepting the ID offer. He was expecting the mirror match and was confident in his sideboard strategy. He smiled at his Centaur Garden as he gathered up his cards, "I had to fight my team tooth and nail to get that card in the deck."