Round 2: Ghosts in the Machines

Fittingly for a tournament dedicated to the Magic players of the world, showcasing National Teams and patriotic spirit from its competitors, the second round would feature a match between two players from the far side of the globe. Also appropriate to a tournament enshrining the greatest players in the world, one of them would be a new Hall of Famer.

Shuhei Nakamura is a name that you first saw near the top of the standings way back in 2001 when he burst onto the scene at Grand Prix Kobe. Since then, you've seen his name more than almost than any other player in the history of Magic. Nakamura is everywhere. Every weekend he's playing a tournament somewhere, and it's all because he loves to game.

His opponent, Jeremy Neeman, has been a rising Australian star, hitting his stride recently. He has been finishing strongly in Grand Prixs, Pro Tours, and Australia Nationals for about five years now. In fact, his progression at Aussie Nationals has gone from 8th to 4th to 2nd. The only reason he didn't win the event this year is because he didn't attend to be present at his brother's wedding. His name quickly became one you recognized, but you didn't necessarily remember why. And then he won Grand Prix Sydney last year and made Top 8 of Pro Tour Philadelphia this year. Follow that up with winning Grand Prix Brisbane a few weeks ago (giving him back-to-back Australian Grand Prix wins) and you have an incredibly good reason to remember his name. If he continues to put up performances like that, there will be no way to forget him. 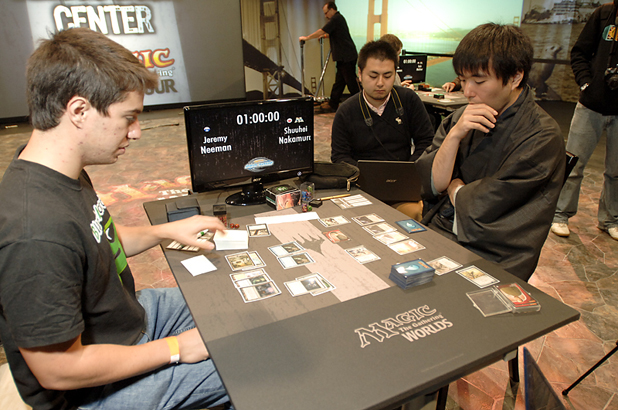 Nakamura started strongly with a Memnite and a Signal Pest paving the way for a Glint Hawk Idol. Neeman, on the other side of the table, had evolved the Blue-Black Control deck he used to win Grand Prix Brisbane recently into a Solar Flare deck. His start seemed glacial by comparison to Nakamura's, due in part to the incredibly appropriate Glacial Fortress that entered the battlefield tapped on turn-one. When Nakamura made a Vault Skirge to activate his Idol, Neeman took the opportunity to kill the freshly mobile statue with a Doom Blade. Yes, it still kills everything.

Neeman was facing the makings of an army. He managed to keep things at a reasonable level with an Oblivion Ring to isolate the Vault Skirge, but Nakamura still had two attackers to get through. When he enhanced them significantly with a Tempered Steel, Neeman looked like he was in trouble. Nakamura dropped him to 10. 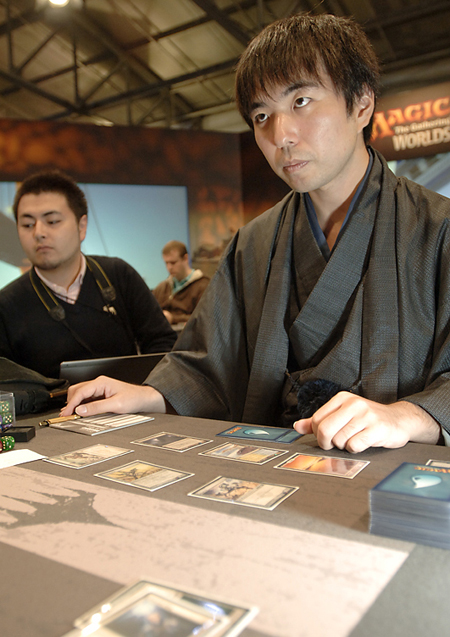 Shuhei Nakamura's usually all laughs, but when he needs to be, the Hall of Famer can get very serious.

At this point, Neeman started to carve his way through the tide of Nakamura's onslaught. First, a Snapcaster Mage returned the Doom Blade to kill the Signal Pest. Exacerbating matters, Nakamura had stopped playing creatures. He was able to find the ghost in the machine with his Moorland Haunt, thanks to the flurry of removal from Neeman, but the creatures were small and ineffective. Neeman took a commanding turn when he cast a second Snapcaster Mage to kill another of Nakamura's creatures in response to a Dispatch, dropping the Japanese player out of metalcraft. Following that, his Consecrated Sphinx loomed ominously over the board. If that weren't enough, the Spirits that Nakamura had managed to accrue over the previous turns died a horrible death to Elesh Norn, Grand Cenobite, proving that no one and nothing can ever escape the Phyrexians. Not even freaky nonmetallic ghost robots.

Facing a Praetor on the ground and a Sphinx in the sky, Nakamura knew that resistance was futile. After consulting the top of his deck one final time, Nakamura succumbed to the hot, hot fire power of Neeman's Solar Flare deck in the first game of this match.

Both players opted for better draws in the second game, Nakamura doing so with a giggle and a sigh, to which Neeman smiled back and nodded his agreement. When things began this game, they did so considerably more slowly and deliberately than in the previous game. Nakamura began with a first-turn Signal Pest, followed by a second-turn Glint Hawk Idol. A second Signal Pest animated the statue, and they attacked for three. Day of Judgment wiped away the two Pests before their patented "double battle cry action" could get started. Nakamura simply animated and attacked on the following turn. Things appeared to get one-sided shortly after that, when Gideon Jura showed up to bolster Neeman. Nakamura kept things reasonable with a Vault Skirge and a Shrine of Loyal Legions, but the planeswalker was going to provide a serious roadblock in his pursuit of Neeman. Some Timely Reinforcements provided yet another barrier, and things started to look even grimmer for the recently-inducted, and very respectable-looking, Nakamura. He chipped away at Gideon Jura and added a Signal Pest to his team, hoping for a chance to push through. 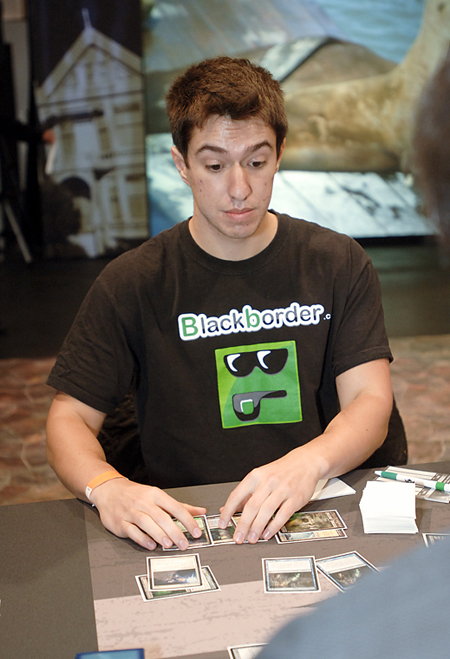 Jeremy Neeman whittles away at Nakamura's robots with his Solar Flare deck.

Neeman began the offensive. With Gideon Jura providing a wall, he attacked with his tokens. With their mission accomplished, he once again reduced Nakamura to a mere Glint Hawk Idol with a Day of Judgment, though this time there was a Shrine of Loyal Legions waiting and growing. Gideon Jura kept going up by two loyalty, and Nakamura kept putting him back down by that same two with his Idol. The Shrine ticked up to four. Nakamura finally found another evasive form of offense in an Inkmoth Nexus, but it was still a long way to victory, and a long game decidedly favored Neeman. At the end of Nakamura's turn, Neeman used some Forbidden Alchemy to find himself a Ghost Quarter. Rather than use it to destroy the Inkmoth Nexus, however, he used it on his own Glacial Fortress to finally find himself a Swamp, allowing him to Doom Blade the Idol.

With Nakamura's one true source of damage dealt with, Neeman contemplated attacking with Gideon Jura. He made a couple of motions towards the planeswalker, stopping short each time, eventually deciding to play it safe and force Nakamura to attack. The Shrine went up to six. Snapcaster Mage enabled a cheap flashback on the Forbidden Alchemy at the end of Nakamura's turn, keeping Neeman's hand filled with exactly what he wanted. Neeman had shown his mastery of the Standard format in Brisbane, and he looked to be in complete control in this match against a powerful deck piloted by a Hall of Fame player. Slowly, he had worked his way into an advantageous position, finally reaching the top of the hill that control players always seek: the chance to start whittling away at his opponent. A Ratchet Bomb completed the puzzle, allowing him the freedom to attack with his Snapcaster Mage without worrying too much about randomly dying to a million Soldiers.

Still, the Shrine ticked up to seven. Understandably, the Ratchet Bomb did not tick up to one. Things progressed like this for one more turn before Nakamura added a second Shrine of Loyal Legions to his side. Neeman had a plethora of cards in his hand and decided to not chance things, using a pair of Mana Leaks to stop it (Nakamura could pay for the first). At this point, Gideon Jura finally attacked. The combination of planeswalker and Invitational winner smashed Nakamura to 4 life, one turn from defeat. An Elesh Norn, Grand Cenobite, provided the decorative icing on top of an already nice looking cake. Nakamura had a pair of Dispatches in his hand to rid himself of the planeswalker and Praetor, but was unable to find a way that would allow him to get into metalcraft thanks to Elesh Norn, Grand Cenobite. He couldn't activate his Shrine or his Nexuses, and he fell to Neeman's titanic team in a few turns.

When I asked him about the switch from a Blue-Black Control deck, which he used to great effectiveness in winning Grand Prix Brisbane earlier, he admitted that things have changed, and he now needs the white.

"It all comes down to Day of Judgment. You just need it now. There are so many people playing cards like Mirran Crusader and less good early targets for all of the single-target black spells, which makes the white cards better. Ultimately, you're just setting up for Day of Judgment now."