Round 2: Hobby One vs. Latins Strike Back 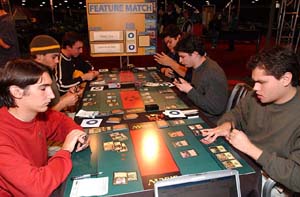 The brothers Ruel and Jeudon are best known as Black Ops, but changed their name to Hobby One, their new sponsor. This team has been around for quite some time now, and won a Grand Prix a few seasons ago. The Ruels went on to individual Pro Tour success, and teamed with Florent Jeudon they're an intimidating trio to see across the table. Their opponents are Latins Strike Back. Latin America made a huge impact at Worlds, with Carlos Romao taking the World Championship, and Diego Ostrovich coming in the Top 4. As their name suggests, this Latin team is looking to prove that Sydney wasn't a fluke. A strong follow-up finish this weekend would cement the region's reputation as a rising powerhouse within the Magic community.

Olivier mulliganed to five to start his match. Romao built up an impressive defense with Resilient Wanderer and Vigilant Sentry, and a mana screwed Olivier scooped very quickly to give the Latins their first game win.

Galimbertti's Chainflinger and Nantuko Blightcutter were certainly bad news for Jeudon's black/green deck. A lone Leaf Dancer was able to walk through Galimbertti's forests, and Muscle Burst took care of the Frenchman's Krosan Archer in combat. This left him with only the unblockable 2/2. However, Exoskeletal Armor increased the clock tremendously, and Galimbertti went into race mode. Some chump blocking by Jeudon provided enough time for the huge unblockable Dancer to come through for the win.

Antoine's board was very impressive, with Basking Rootwalla, Sylvan Safekeeper, Cephalid Scout, Aquamoeba and Arrogant Wurm. Barbero only had a Looter, y Cur and Skywing Aven, and would need to dig into an answer quickly. He was never able to stabilize, and Nantuko Disciple put Antoine over the top to get a concession out of Barbero.

Once again, Olivier mulliganed down to five, but it was a bit better since Romao mulliganed to six playing first. Olivier put Arcane Teachings on Auramancer while Nomad Decoy kept the world champion in check. Still, Mystic Zealot and Compulsion kept Romao in the game. Just as things seemed to be headed in Romao's favor, Olivier tapped six mana and summoned Kamahl, Pit Fighter- a nightmare for a white/blue deck. The rest was practically academic, and Olivier and Romao were off to Game 3. 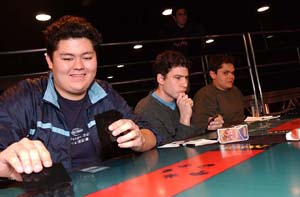 Once again, Antoine opened strong with Safekeeper, Werebear and Aquamoeba all out by turn three. Barbaro's draw was less than stellar, starting of with a fourth turn Cabal Torturer. Churning Eddy bounced it back to save Antoine some time, and Lost in Thought nullified what would have been a devastating Torturer. Barbaro's draw was poor and he was easily overwhelmed, giving Antoine the game win and Hobby One their first match.

Olivier came out strong in Game 3 with Hallowed Healer, Ember Beast, Militant Monk and Trained Proghorn. Romao only had Llanwan, Cephalid Empress, but made it into a significant monster with the help of Ghostly Wings. Olivier tried to respond with Violent Eruption, but Romao had Pay No Heed. He then put Cagemail on the Beast, and suddenly things seemed to be in the Brazilian's favor. The game advantage swung right back around, as Tattoo Ward took off the Cagemail and then destroyed Ghostly Wings, but Romao was doing everything in his power to stay in the game. He enchanted the Ember Beast with Kirtar's Desire, and put Floating Shield on Llanwan. Romao followed that with Psionic Gift, and he now had significant pressure on Olivier's one toughness creatures. Wormfang Behemoth just made the situation even better. Just when all hope seemed lost, Olivier drew Shower of Coals, pitched his hand, and devastated Romao's board to take the match for his team. 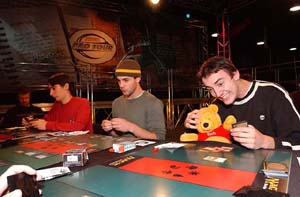 Galimbertti had a second turn Werebear in his second game, while Jeudon's Mesmeric Fiend took Chainflinger. The Fiend traded straight up with a Barbarian Lunatic, and the board developed into a standoff, with Galimbertti's Seton's Desired Blightcutter holding back Jeudon's team. However, Shadowmage Infiltrator and Frightcrawler gave him the evasion he needed, while Squirrel Nest provided yet another threat. Thermal Blast burned away Finkel, and Galimbertti's Rabid Elephant kept the squirrels at a minimum. Crippling Fatigue was flashed back to kill Werebear while Galimbertti had six cards in his graveyard. Eventually Jeudon's board proved to be too much, and he took the win to give Hobby One a sweep.