Anton Jonsson and Antoine Ruel were walking over to the feature match table, they chatted about their matchup. Anton was smiling grimly, knowing he was about to face an anti-control deck metagamed to the teeth against the black-white-green control deck he and his beach house cohorts were sporting. Anton sat down and immediately extended his hand to offer an intentional draw. The smile on Anton's face clearly conveyed how well he knew his opponent would be declining. 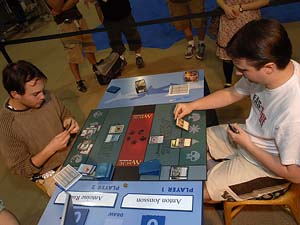 Two of Europe's finest met in Round 2

Anton ruminated a bit. "Well, since I will clearly lose Game 1, that means at least I'll have a small chance Game 2, since going first is probably my only chance. But even if I win that, then there's Game 3, and I don't think I can win that."

As far as they know, these two grizzled veterans have played each other just one other time so far, at the semi-finals of the most recent Pro Tour-San Diego, where Ruel took the match. Antoine shook his head at that memory. "Your deck was so good, but you just couldn't get the finals. At least I got you that one game with Sun Droplet, even if I did keep forgetting to use it."

Unfortunately for Anton, the match-up he faced here was much worse than San Diego. Ruel is playing a deck similar to one that's gotten some attention on Magic Online recently, a concoction that features eight Howling Mines (thanks to Kami of the Crescent Moon), Ebony Owl Netsuke, Sudden Impact, and lots of Boomerang effects. It's an anti-control approach designed to punish the ponderous reactive decks expected to be popular at this event.

Anton asked if Ruel had ever tested against beatdown, and Ruel could only laugh. Randy Buehler spoke with the Ruels before the round, and found out that the French brothers had decided that, though they could theoretically use all 15 sideboard slots to give the design at least some game against aggro, they decided to just go all out and aim for control with everything they had. It worked in Round 1, and there's no question Antoine Ruel is happy to see this matchup for Round 2.

Ruel declared he'd be keeping even before he'd pulled up his entire starting hand. Anton fanned out his starting seven and quickly sent it back. "Maybe I could just mulligan to zero and beat you that way somehow?" He shuffled a bit, smiled, and pointed out "Well, I may mulligan several times in this match. It's probably my only chance." Pulling up six he frowned and sent it back again. At five he kept, and we were off.

Ruel began with Howling Mine. Anton got an Orzhov Signet into play turn two, but his second copy got Remanded, then Boomerang and Eye of Nowhere sent the first Signet and a land back to his hand, forcing the Swede to discard despite starting with a double mulligan. Next was Kami of the Crescent Moon, with three mana up for counters. Anton was allowed Signet No. 2 and Signet No. 3, but Remand denied a Last Gasp on the Kami. A new Howling Mine joined the board and things were looking grim.

Anton tried for a Castigate, running into Remand, but that allowed a Cranial Extraction to resolve against the now tapped-out Ruel. Extraction called Sudden Impact, showing a hand of Ebony Owl Netsuke, Boomerang, three land, and a Sudden Impact. Sudden Impact went to the bin, and Ruel drew up a fist of new cards. This time it was Ebony Owl, Ebony Owl.

Anton avoided the owls for one turn by pointing a couple removal spells at the Kami, but continued shaking his head as he tried to figure out some plan. The best he could do was another Signet (getting him up to eight mana in play) plus a Faith's Fetters for one of the howling mines in play. Ruel drew up his fist of cards, played Howling Mine No. 3, Ebony Owl No. 3, and then it was back to Anton's turn, to the cost of 12 damage from the owl squadron.

Anton summoned a couple Loxodon Hierarchs to try and get some life back, but knew things were dire. Ruel scooped up his next was of cards and Anton winced. "Am I dead?" Ruel was quick with the answer: "Yes, I'm just figuring out the best way."

Ruel passed the turn, and on Anton's upkeep Ruel sent the deathblow: Gigadrowse everything the Swede had in play, plus boomerang a land, and that was that for Game 1 as the Ebony Owl Netsuke team overwhelmed Anton's meager life total. . 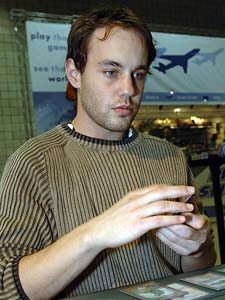 Anton opened with Signet, and Distress to Ruel's Howling Mine for this one. Distress revealed Exhaustion, Ebony Owl Netsuke, Exhaustion, Mikokoro, Center of the Sea, and two copies Coral Reef. Exhaustion went to the 'yard, followed by the Howling Mine thanks to Naturalize.
Things would otherwise have been looking good for Anton if it weren't for Mikokoro, but out came the Owl and Mikokoro began going to work. Antoine had to make a token one turn, and then try to Mortify if during his upkeep to get under the Owl, but Ruel had a boomerang to send a land back, putting the Owl damage on after all.

Anton did his best to get his reactive deck to stay as active as possible, but it was all over a couple turns later. Anton drew his cards off the various Howling Mine effects in play at that point and then fell to a giant blast of Sudden Impact + Twincast, which was more than enough to put the game away in combination with the Ebony Owl Netsuke.

It was a quick, smashing win for Ruel, whose deck looks incredibly dominating for this field if he can just dodge enough aggro decks to make it all the way.