Round 2: "I Thought You Said Your Deck Was Loose!"

"This is the last person I wanted to play in this pod..." grumbled Paul Cheon as he sat down to face Pro Tour champion Chris Lachmann for their Round 2 feature match. The California native, currently level 8 in the Pro Player's club and 2006 U.S. National champion, didn't help matters when he proceeded to lose the die roll and take a mulligan. 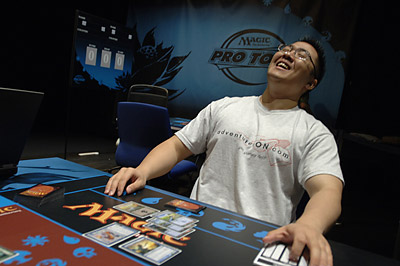 Paul Cheon, exulting in his Level 8 status. Lachmann, however, was content to simply lead on a Forest while Cheon made an Island and Mothdust Changeling. The lowly 1/1 wasn't able to get any attacks in, however, as Lachmann made a turn-two Woodland Changeling which he then followed up with Wren's Run Vanquisher, revealing Elvish Promenade. Cheon simply made land drops while failing to add to his board. At four mana he finally made his second play: Nevermaker.

Paul looked to be firmly in blue-black though what class he was depending on wasn't clear. Lachmann looked to be green-black, though a Vivid Crag suggested some possible splashes. Over the weekend many pros have voiced preferences for drafting easily splashable removal like Nameless Inversion, Oblivion Ring, and Lash Out and paying for it via Vivid lands and other color fixers. It remained to be seen whether that was Lachmann's plan; instead he simply turned his Vanquisher sideways and attacked.

Cheon thought for a moment and quickly double-blocked with his Mothdust Changeling and Nevermaker. Lachmann opted to kill both creatures and the Nevermaker sent a Lys Alana Scarblade back to the top of the New Jersey native's library. Lachmann made an Ambassador Oak before passing, and when Cheon drew for the turn he hit a monster: Mulldrifter. The veritable first pick put him up on the card count, nullifying his mulligan and then some, all while providing an evasive 2/2 body.

Lachmann seemed nonplussed and quickly sent both his 3/3 Oak and the 1/1 Elf Warrior tag along into the red zone. Cheon moved his Mulldrifter in front of the Elf but Lachmann had more tricks in the form of a Hunting Triad reinforced, making his 1/1 into a considerably more formidable 4/4. Cheon answered back by playing a mainphase Pestermite opting to use its comes-into-play ability to untap one of his own lands so he would then play Hornet Harasser. The Harasser promised to make combat difficult for Lachmann, and sure enough, he went into the tank when he was given the turn back.

Eventually he opted to attack with his Woodland Changeling and Ambassador Oak, which traded for Pestermite and Hornet Harasser respectively. That left Chris with his 4/4 Elf token before he re-played his Lys Alana Scarblade. A Violet Pall / Peppersmoke combo from Cheon answered both those problems and netted him a free draw in the process, and the extra card advantage was beginning to turn the tides in favor of the Californian. Lachmann was down to a single card in hand with a lonely Leaf Gilder in play, while Cheon's forces had grown to include Stinkdrinker Bandit, a Faerie Rogue token, and Sage of Fables. The life totals stood 12-5 in favor of Lachmann.

Cheon continued on the offensive while his opponent simply drew a card and passed for multiple turns. When another Mothdust Changeling (pumped from Sage of Fables) and a Sentinels of Glen Elendra hit the board, Lachmann packed it in.

Both players turned to their sideboards quietly, Cheon visibly dealing with the effects of a rather obnoxious head cold he had managed to pick up in transit to Malaysia. Lachmann focused on determining which cards he wanted to cut before declaring he would play for the second game. Both players had a good read on one another as they had spent the previous day drafting together to practice for the format. Lachmann in particular claimed some 50+ Lorwyn / Lorwyn / Morningtide drafts before coming in to the event on the weekend, and testing with the likes of Paul Cheon and Luis Scott-Vargas certainly didn't hurt.

Both players quickly kept their opening hands, and Cheon again got on the board first with a Prickly Boggart. Not to be outdone, Lachmann made a two-drop in the form of Leaf Gilder, threatening to expedite the process of playing his four-drops. Cheon simply attacked then played a Noggin Whack post-combat for two mana thanks to his boggart's status as a Rogue. Lachmann took a moment to review which cards he could bear losing.

Eventually a Blightsoil Druid and two Forests were revealed for Cheon's perusal. He quickly moved one of the lands to the graveyard, but hesitated on his second pick. Eventually he opted to take the 1/2 creature, leaving Lachmann to follow up with a Bramblewood Paragon. That forced Cheon to hold his Prickly Boggart back in the hopes of trading for the Leaf Gilder as he played a Sage of Fables which could take out any attacks from the Bramblewood Paragon.

Not to be outdone Lachmann summoned an oversized Woodland Changeling (with a +1/+1 counter thanks to the Paragon), but that merely traded with a Moonglove Winnower Cheon mustered the following turn. Lachmann's follow-up play was a whopper: Nath's Elite, winning the clash. That left him with a 6/4 creature with Lure and trample, again thanks to the Bramblewood Paragon, and Cheon was suddenly in a bit of a tight spot. On his turn he opted to send with his Prickly Boggart to keep it from being sucked into chumping duty on the 6/4 before making a Mulldrifter, leaving him the 2/2s he needed to take out the Elite if Lachmann was willing to attack. 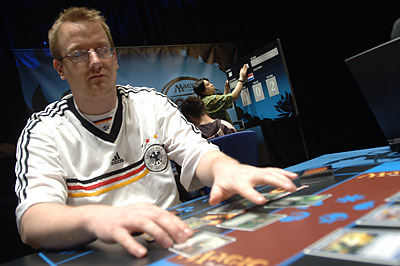 Cheon's testing partner, Pro Tour champion Chris Lachmann.Lachmann quickly opted for that plan of action, netting a two-for-one before playing a Game-Trail Changeling that hit as a 5/5. Paul wasn't done yet, however, as his first Mulldrifter had been gracious enough to provide him with his second. A Weed Strangle dealt with the offending 2/2, however, and an all-out attack from Lachmann left the life totals at 19-9 in his favor and put his Leaf Gilder and Cheon's Prickly Boggart in the graveyard.

Things were spinning out of control for the former U.S. National Champion, and he simply made a Final-Sting Faerie on his own turn. He had shenanigans (not the Boggart kind) before Lachmann moved into his combat step, however, using a Pestermite to tap the 5/5 Game-Trail Changeling to buy him some time. On his following turn it looked like time was all he was going to need as he used a Footbottom Feast to re-up on both Mulldrifters and his Moonglove Winnower. He stacked the Winnower on top, drew it from the Feast, then played it and attacked for 2 with his Pestermite.

When given the turn back Lachmann could do little but draw and pass, unwilling to trade his 5/5 for Cheon's freshly cast Winnower. He needed to come up with something quick or else Cheon was going to bury him in another avalanche of card advantage as he played his third Mulldrifter of the game with a second waiting in the wings. Lachmann drew for his turn and went deep into concentration. The seconds seemed to crawl by. Could he possibly have outs?

Eventually he played a Changeling Titan which picked up a counter from the Bramblewood Paragon and threatened to allow him to regain control on the ground, though it forced him to champion his Game-Trail Changeling. As an 8/8 trampler the Titan could give Paul fits and potentially force his air force (two Mulldrifters, a Final-Sting Faerie, and a Pestermite) to stay home.

Paul was having none of it. On his turn he played a Squeaking Pie Sneak and a Stonybrook Angler before attacking for 4 with his Pestermite and Final-Sting Faerie. His attack left the score at 9-7 in his favor and he was looking good with plenty of blockers for the 8/8. Lachmann drew his card for the turn and quickly sent his beater into the red zone. Cheon considered his blocks carefully before finally placing the Pie Sneak and Winnower in front of the 8/8, presumably playing around Hunting Triad, which could potentially prove to be fatal. After blocks were declared, Chris quickly extended the hand.

"I thought you said your deck was loose!" He chided his friend.