Round 2: "I've Felt More Awkward Before"

Osyp Lebedowicz and Ruud Warmenhoven are familiar with each other. So familiar, in fact, that Osyp wasted no time in regaling the audience with a classic tale. 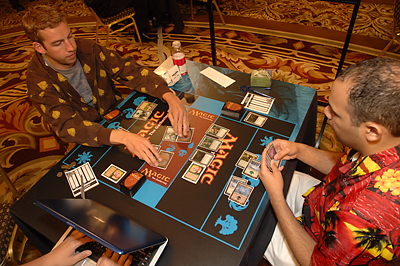 Ruud Warmenhoven and Osyp Lebedowicz go way back."One time I went out to a nightclub with Ruud. He says, 'American girls are so easy to pick up compared to Dutch girls.' So I'm like, 'Oh really?' And he says, 'Yeah, I have the perfect line. Wait for it.'"

"So Ruud goes up to this girl, and is doing fine without the line. She's into him, you can tell. Then he winks, and now I know it's coming."

"Have you ever made out with a guy with a tongue ring?"

Ruud won the coin flip as both players shuffled. There was some confusion between decks as they both have the same Magic: The Gathering sleeves.

They both laid out their opening hands, and Osyp, peeking first, shouted, "I TOLD you this was your deck! You're such an idiot! At least I know what you're playing. Do you want to switch?"

After another round of shuffling, both players again kept their opening hands, this time from the correct decks.

Warmenhoven kicked off with a Pendelhaven and a Llanowar Elves, which was answered by a Snow-Covered Forest and the same Elf from his opponent.

Warmenhoven attacked with Llanowar Elves, trading with Civic Wayfinder. Mutavault plus Bramblewood Paragon ended the turn for Warmenhoven with a Forest untapped.

Treetop Village came into play tapped, along with a second Wayfinder for Lebedowicz getting another snowy Swamp. Warmenhoven's Perfect made a 3/3 trampler on end step.

Warmenhoven played a Forest and activated his Mutavault, sending it, the Paragon and the Elf Warrior token into the red zone and connecting for 9.

Lebedowicz's fourth turn was a Forest into Troll Ascetic and Wren's Run Vanquisher, discounted by revealing Nameless Inversion. Warmenhoven shrugged and made another token.

Warmenhoven activated Mutavault again before sending everyone but the Perfect, threatening a lethal 12 damage. Troll Ascetic blocked the token, Wren's Run Vanquisher blocked Bramblewood Paragon, allowing 6 damage through. Warmenhoven made a token with damage on the stack to get one last use out of his Paragon's +1/+1 counters.

Lebedowicz, hanging on at 5 life, taps out for Profane Command, giving the Imperious Perfect -2/-2 and retrieving his Wren's Run Vanquisher from the bin. Warmenhoven had a second Mutavault but passed the turn, as he had no good attacks.

Lebedowicz goes to 3 for Thoughtseize, and Warmenhoven answered back with a lethal Squall Line. 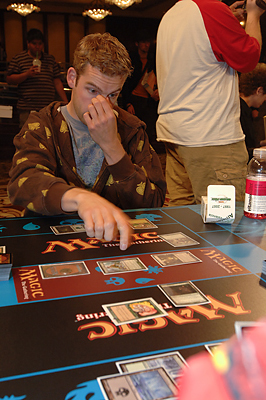 Ruud gets by in a pinch.Lebedowicz led off the second game the same way he did the first: Forest and Llanowar Elves. Warmenhoven's Treetop Village allowed the Elf to sneak a point in, followed by a Forest and a pair of Boreal Druids.

Warmenhoven's had a Forest and a Bramblewood Paragon for turn two, but Lebedowicz trumped with a Chameleon Colossus. Mutavault and Imperious Perfect set up the defenses for Warmenhoven, who went to 15 from the Colossus on Lebedowicz's turn. After combat, Lebedowicz played a Gilt-Leaf Palace, revealing Chameleon Colossus, and tapped out to play the revealed Colossus along with a 0/1 Tarmogoyf.

Warmenhoven needed an answer to the opposing monsters, and he came up with a Wren's Run Vanquisher, revealing a second Perfect. He sent the turn back to Lebedowicz with a Treetop Village up.

Primal Command from Lebedowicz put him up to 27 and tutored for a Shriekmaw, getting a shrug from Warmenhoven as he made a token.

Warmenhoven went into the tank again, earning a stare-down from Lebedowicz. Warmenhoven emerged with a Mutavault and Imperious Perfect, again passing with Treetop Village open.

The Shriekmaw hit play for full price, killing the first Imperious Perfect, which was replaced by a token. Tarmogoyf was now 2/3.

A third Perfect from Warmenhoven enabled both 4/4 tokens to crash in, taking Lebedowicz to 19. Lebedowicz flashed Profane Command at the end of Warmenhoven's turn, threatening lethal with fear and damage. Warmenhoven just shrugged. 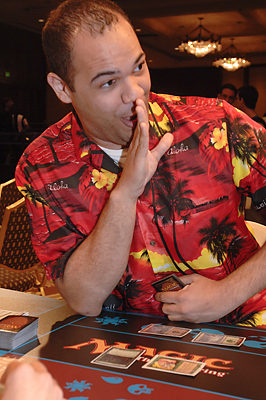 Osyp gets a Ruud awakening."I'm confused. I wonder what you have. I thought that was game..." Osyp said with a bewildered look. "MAN! I wish I knew my guys had pro black! Why couldn't you just scoop like a normal person?"

"Well, I played some games with that deck," Ruud replied.

Ruud had figured out a step ahead of Osyp that Chameleon Colossus couldn't reap the benefits of Profane Command.

Pat Sullivan piped in from the gallery, laughing: "Osyp had that look where he thought he had it."

"I think we're even on the tongue ring story now."

Shriekmaw bashed in, taking Warmenhoven to 12, but Ruud had an Elvish Champion to rumble in for approximately a billion.