Round 2: Izzet Time for an Izzet Pun Already?

an elite player coming into the World Championships, it's not unreasonable to hope for a couple early pairings that may not be as tough as might be expected once the field starts thinning out. So, for most players, it's usually a bad sign to hear your name called out as a feature match this early because it just confirms that you'll be starting right off with a top player. 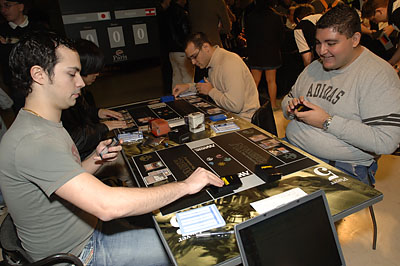 For this battle, it's Johan Sadeghpour of Sweden against Antonino De Rosa of the United States. Both players are running control decks based on Izzet mana with the kind of boost that only the Urzatron set of lands can produce. Complicated and demanding mirror match against strong player in early round while still waking up from jetlagged haze? Check.

Johan was on the play for the opener with a mulligan. Both players spent their early turns developing their mana base with Izzet-producing lands, various Urza pieces, and Izzet Signets. Neither player had access to the full 'tron early on, but Antonino was handicapped by having only one land that could produce colored mana, making it impossible to cast his key spells while leaving back mana for counters. Forced to play defense for now, Antonino passed his fourth turn, then played Spell Snare on a try at Izzet Signet #2 from the Swede. Playing land #5, however, Johan got to follow through with a crucial Compulsive Research, kicking his deck into gear and moving into the second phase of this mirror match, starting the war of card advantage. Even better was his discard of double Think Twice, drawing a chuckle from Antonino and "Hey, that's like a combo!" 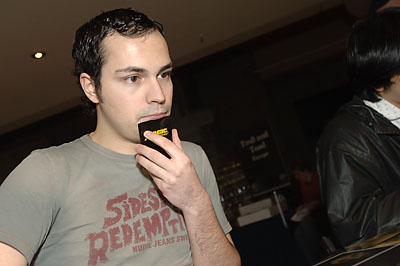 Johan rests his chin on a very fine hand and ponders his next play.

As so often happens in this mirror match, from here the players keep tapping out as they try to get those vital spells in while the opponent is tapped out, a process that tends to continue until one player has developed such a mana advantage that he can cast key proactive spells while also leaving up some mana to interfere with the opponent. For this match, the defining factor was Johan's ability to control Antonino's access to colored mana. By countering Signets and casting Annex on other blue sources, he was able to keep Antonino down to only a spell a turn while rapidly advancing his own game with double or triple that many spells per turn. Antonino, stuck on stuck on two Mines and a Tower, went for an Izzet Signet which this time ran into a Remand, rubbing salt in the wound by forcing a discard of Demonfire for getting stuck at 8 cards thanks to Remand combined with no land drop.

Annex hammered in yet again from the Swede, making it 8 lands to 2, followed up by a devastating Spell Snare on Ant's Izzet Signet and double flashback on Think Twice, putting Johan completely in the driver's seat. Looking to put it away, Johan played another Compulsive Research, followed by land and a lens, gaining dominating advantage in mana development, plus Mana Leak on the third Signet try from Ant, who was now stuck on just three Urza lands.

Now enjoying a 9 to 3 mana advantage, Johan passed the turn. Antonino was able to complete his set of Urza lands, but had to pass the turn with no access to colored mana. Johan flashes out a Bogardan Hellkite, then followed up with Wildfire on his own turn to drive the final nail in Antonino's Game 1 coffin. Antonino smiled, trying to put as good a face on it as possible: "Okay, give me my lands back now."

Now it was Antonino on the play, with both players sideboarding in copies of Muse Vessel to break the card advantage war wide open. This game opened with just land, as both players seemed to slowroll their Signets for opportunties to get them out either against a tapped out opponent or with some kind of counterMagic back-up. Johan made the first move on turn four, playing Izzet Signet, which ran into Mana Leak. Ant passed the turn right back, and Izzet Signet #2 for Johan managed to stick. Antonino went for Compulsive Research, which got Remanded. He had enough mana to cast it again, though it left him tapped out. Now Johan was able to cast his own Research against the tapped out American, discarding a redundant Urza's Mine but just passing the turn with three mana up and no land drop for the turn.

A very threatening Muse Vessel arrived for Ant with UUU up, after paying the three mana to get past a Mana Leak from Johan. Johan untapped and thought quite a bit, clearly figuring out his plan to get around the Muse Vessel as well as possible. Deciding to go with mana development, he played a second Urza piece, then used Annex to get the remaining piece from Ant, becoming the first player to complete the Urza set in the match. Ant had Annex to get it back. Johan tried to save his 'tron with a Rewind, but Antonino had the Mana Leak to seal the deal, getting his mana back and shutting down the Swede's 'tron set.

Johan, having at least dodged a Vessel activation since Ant's mana was tapped out again, went for Research again, happily finding two Urza's Towers, discarding one while using the other to power up his 'tron set again. Ant, now dangerously behind in mana development, had to go for main phase Think Twice, probably looking to complete his own 'tron. Johan leaned forward intently: "Get there?" Ant smiled and shook his head, using the Vessel and getting a Prismatic Lens, passing the turn and watching Johan draw two off Think Twice at the end of the American's turn.

Now in his own turn and fully powered up with access to 14 mana, Johan confirmed the American's total as 20 and just passed the turn, using Remand to stop a flashed back Think Twice. On his next turn Johan played his own Muse Vessel, to which Antonino responded, "You probably have the same deck card for card!" Antonino tried to stop the Vessel with Remand, but Johan had a Spell Snare to force it through immediately, plus enough mana to use the Vessel now - which pulled another copy of Muse Vessel! Thanks to his giant pile of mana, Johan was able to play and activate this new second copy of Mue Vessel was well, getting a Demonfire from the American. 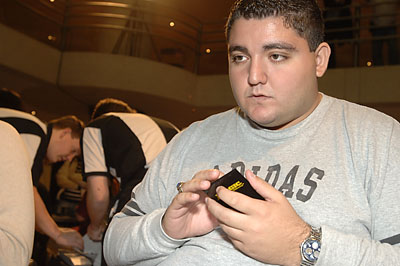 Ant, clearly in trouble, used his own Vessel, forcing Johan to pick between Demonfire and the final Urza piece that would complete Antonino's 'tron, opting for giving the Demonfire up with a clear grimace but also a clear look of confidence that he'd made the right choice. Firing off the last card in his hand, Antonino pointed a Demonfire from his own hand at Johan's face for 5 points of damage, dropping his opponent to 11. Johan leaned forward quickly, counting up Antonino's available mana. "So, you have to peel a land, right?" Counting again, though, it was worse than that. Because the Muse Vessel costs a mana to pull off the spell, Antonino was actually short 2 mana for the kill.

Antonino smiled anyway, in that combination of easy unease that he seems to pull off so well. "Well, I could pull the missing tron piece, maybe some card drawing. Would Annex do it? Yeah, that looks like it would be fine too." Johan did some final calculations, then pointed the Demonfire from his own hand at the American, dropping him low enough to finish him off next turn with Antonino's own Demonfire sitting in a stolen Muse Vessel. Leaning forward expectantly, Johan passed the turn and watched intently as Antonino drew and looked at his last card of the game. Doing some quick math, Antonino quickly revealed the new card to be Shivan Reef, putting him just one mana short of burning his opponent out in time. He fell next turn to a Demonfire he owned pulled off a Muse Vessel he owned, powered by the missing piece of the 'tron that he also owned, but none of which were on his side of the table.