Round 2: James Elder vs. Ian Heinig 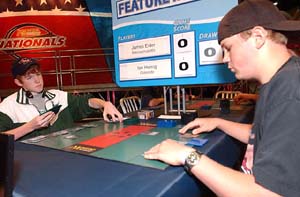 James won the JSS Qualifier that took place at Grand Prix Boston. James has been playing for almost a third of his life, somewhere between five and six years. Ian qualified through the local JSS Challenge near Carbondale, CO. "It was small," he said. "Only about forty people or so were there."

The players wished one another good luck and the game began. Ian had won the die roll and decided to play first. Both players started the game with an Island. Ian diversified his mana base a little on turn two with an Adarkar Wastes, while James kept playing Islands. "Six cards," Ian responded when James asked how many cards he was holding. James played an Island and then passed the turn, not happy with that information.

At the end of James turn, Ian did some cycling. The cards that went toward the graveyard included Mage's Guile and Choking Tethers, clearly signaling that Ian was playing Aqualube. The game continues with land, go and land, go from both players for several more turns. The first non-land permanent hit the table after both players had more then six lands sitting on it.

"Compulsion," James announced. Ian contemplated the Compulsion for a while. If it got to stay, Psychatog could take off. "Counterspell," Ian said, setting it on the stack in the middle of the table.

The Counterspell from Ian met one from James, and the Compulsion got to stay. Ian chose not to fight over it because he wanted to hold a little counter backup for his own turn, and during his turn he was able to muscle an Astral Slide into play after a brief counter war. The two players each had a single non-land permanent on the table at this point, but the Compulsion from James seemed to offer more of an advantage at this point. Ian cycled away another Choking Tethers, but his table is still relatively clean. 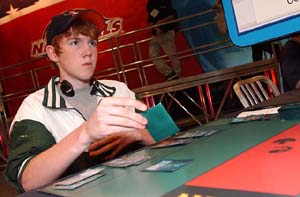 "I'll just concede," Ian said in disgust. He was clearly not happy with his play in Game 1.

Ian removed single copies of Choking Tethers, Teroh's Faithful, Mages Guile, and Wrath of God, as well as two copies of Akroma's Blessing. He added four copies of Envelop and a couple of copies of Morningtide to his deck. "I don't have much of a sideboard for 'tog," he commented as he shuffled up his deck.

"I'll play," Ian announced as the shuffling continued. "Good luck," he offered to James as he picked up his seven cards. Both players decided to keep their hands, and a whirlwind game of Magic ensued.

"Your turn," Ian would say, causing James to quickly respond with "You're up." The two players were a maelstrom of "draw a card, play a land and pass the turn," until James tried to cast Duress.

The Duress was met with an Envelop, which James tried to counter with Counterspell. The Counterspell was met with Memory Lapse, giving James the ability to redraw his counter magic yet again. "Didn't you play a land?" James asked when Ian placed a Plains on the table.

A brief debate ensued, neither player was sure of what had been played, and the judge was not standing there when the debate ensued. "I'll just pick it up," Ian said. The land didn't matter to him at all, he already had more then enough on the table for Aqualube to function.

The land count is tilted slightly in favor of Ian, and when James tries to cast Concentrate it is met with a Counterspell. The card drawing from Concentrate could have swung this game in the other direction, but it wasn't to be. James looked consternated as he shuffled his cards about in his hands.

The muscle it took to get the morph on the table though left Ian without anything to stop James. For a turn James got to do what he wanted to do, and this time that meant some spellcasting. With Ian unable to counter anything James cast a Concentrate and then added Compulsion to the table. The morph creature turned over a turn later, revealing everyone's favorite white flyer right now, the Exalted Angel. She's been all over these events this weekend, and seeing her at yet another feature match table isn't shocking.

A Duress from James was met with another Envelop from Ian. James looked at his hand and cast the Circular Logic that had earlier been Memory Lapsed back onto the deck. The problem here was that Morningtide had just been cast by Ian, and only one card was in James' graveyard. Ian tapped a single land the Envelop resolves.

A turn later James attempted Duress again, and another counter war ensued. This time though the Duress resolved, and Ian revealed Morningtide and Scrivener. The Morningtide went to the yard. "Upheaval," James announced. "Floating a black and a blue," he finished.

"Ok," Ian said. James picked up all of his stuff, played a land for the turn and cast his big toothy fellow, the Psychatog. It didn't much help at this point though, as the life totals read 31 to seven in Ian's favor. That big swinging Exalted Angel has made this game a little unbalanced.

The two players look to have started over again, except that there was that Psychatog swinging for a single point of damage each turn.

"How many cards in hand," Ian asked.

"How many in graveyard," Ian asked next.

"Sixteen," James responded after making a count. Still out of lethal 'tog range Ian allowed him to swing.

An Astral Slide from Ian is met with Counterspell. Ian asked the same graveyard and hand questions again. Then he tried to cast another Astral Slide, again it was countered, this time with Circular Logic being fed to the Psychatog.

"I have a response," James said. The digging started. It looked like he didn't have a Counterspell, and he was desperately hunting for one. Two uses of Compulsion produce no answer and the Wrath of God resolved. Psychatog had left the table.

"How many 'togs in those two piles," Ian asked. The two piles he was referring to were the graveyard and the removed from game zone. 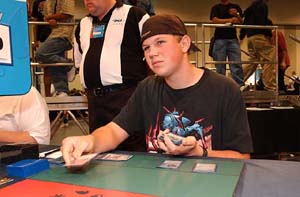 "Two 'togs," James responded. Having seen two 'togs and an Upheaval James is running out of things that work in his library.

"Scrivener," Ian announced. Before deciding what card he wanted from his graveyard he perused the huge piles of graveyard and removed from game that James had sitting on the play mat. He finally decided on an Envelop. The Scrivener was short lived as James first used the Chainer's Edict out of his graveyard, then played from his hand to make sure it was dead. James used Compulsion twice more, bringing his library all the way down to three cards.

With a single card left in his library James tries the gambit again. "Upheaval," he announced. "Floating blue, blue and black," he concluded. "Ok," Ian said as he allowed the 'tog to resolve.

James has one card left in his deck after the resolution of Upheaval and Psychatog, but he now has enough card power for his Psychatog to win the game.

Ian took his turn, drew his card, and offered his hand. The game belonged to James with only one card left his deck. He drew the final card and swung with his Psychatog. Neither player wanted to do the math and Ian just extended his hand in concession.

"Good luck the rest of the day," James responded.