Round 2: Jeremy Darling vs. Kenny Hsiung 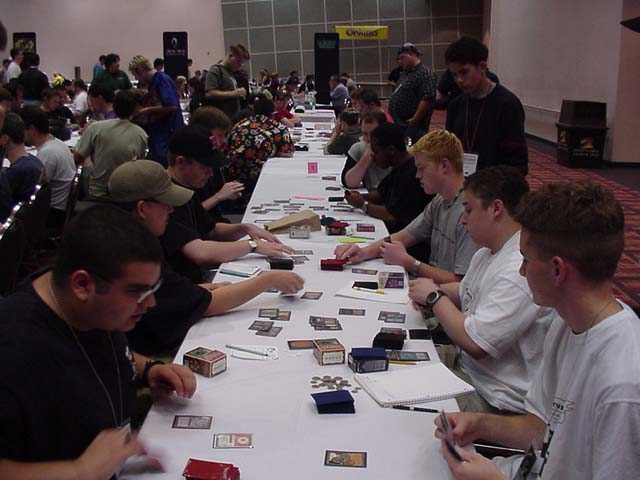 These two combatants showed just how profound an effect Apocalypse had on the Block Constructed environment. Jeremy Darling played a blue-red-black control deck that looked very little like its precursors. Kenny Hsiung was playing a version of the much-discussed black-white Arena deck.

Kenny dominated the opening of Game 1. A Gerrard's Verdict, Ravenous Rats and Bog down kept Jeremy's hand size down, costing him two Recoils, two Fire/Ice and a Prophetic Bolt. Nevertheless, the lack of pressure from his opponent let him use his two remaining Bolts to start racing, digging into better answers.

Hsiung played a pro-red Voice of All, and Vindicated Jeremy's Volcano, keeping him out of black mana. Then he dropped a second Voice, putting his opponent on a heck of a clock. Jeremy had Void in hand, but did not draw a black source. He took five more to the head. He cast Urza's Rage on his opponent, dropping him to six.

Jeremy untapped, expecting to lose, but a swamp was waiting at the top of his library. He Voided for 4, swinging the game in his favor. Hsiung lost a Scuta from hand and flashed a Vindicate.

He all but leaped out of his seat when he topdecked Gerrard's Verdict, emptying Jeremy's hand. Jeremy was not to be outdone, and pulled Fact or Fiction, getting Recoil and Prophetic Bolt over two land and a second Fact or Fiction.

Hsiung Vindicated Jeremy's swamp, but was on the wrong end of a Prophetic Bolt that knocked him to two and gave Jeremy Fire/Ice. All he needed was a turn to untap. Hsiung ripped Death Grasp like a pro, taking the game.

Game 2 was more villainy from Hsiung, who endured a Turn 2 Ice that slowed his game only to come back with Bog Down, then Verdict on the following turn. Not having boarded in Dodecapod, Jeremy was at a disadvantage.

He got into head surgery, taking Bog Down over Desolation Angel, and was forced to watch as Hsiung topdecked a pro-red Voice of All.

Jeremy played Fact or Fiction, receiving two Undermines over a second Fact or Fiction, Yawgmoth's Agenda and Urborg Volcano. He used one on Hsiung's Spectral Lynx. Hsiung tried to pull the second out of his hand with a Death Grasp on the following turn.

Jeremy showed another Fact or Fiction in response, getting Void over four land, and chose to take the damage from the Grasp. He untapped and Lobotomized Hsiung for his Desolation Angels. The Voice knocked him to five. 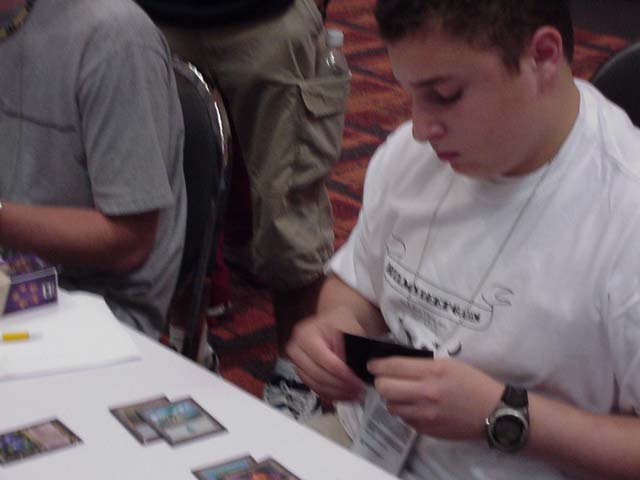 Hsiung played another Death Grasp, and this time Jeremy Undermined. He played Void, removing the Voice and seeing a Vindicate. Hsiung topdecked another Voice. Jeremy went looking with a Prophetic Bolt, but found only Crosis.

He drew an Undermine for the next Voice Hsiung drew, but was dropped to three. He drew Agenda and put it into play. Hsiung's Angel hit him to one, and he tried to Vindicate the Agenda, but Jeremy played Undermine from his graveyard. He untapped and knocked his deck.

"What are you knocking for? You've got the game won!" -- Kenny Hsiung.

Unfortunately, his team was already down 0-3 in matches. After three turns of watching Jeremy reuse powerful effects, Hsiung conceded, evening the match at one apiece.

Hsiung started Game 3 right, with a Verdict that caught two lands, then a Vindicated for Jeremy's Salt Marsh. He kicked up a Scuta on his next turn. Jeremy had no Recoil. A second Scuta met an Undermine.

Jeremy thought hard before tapping out for Lobotomy. He chose Voice of All over Death Grasp. Scuta dropped him to nine. Hsiung added a Lynx to his team. Without a fifth land, Jeremy was forced to main-phase Fact or Fiction. Grasp ended him.