Round 2: Jon Finkel vs. Brian Hegstad 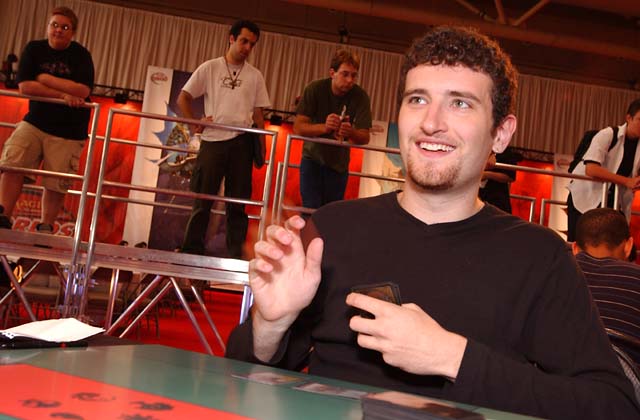 Last year, Jon Finkel led Team USA to yet another win in the Worlds team competition. Oh by the way, he claimed the individual title as well. This year it will be Trevor Blackwell, Brian Hegstad, and Eugene Harvey trying to defend American honor. In round two, Finkel took on Hegstad and he seemed a lot more interested in his own honor than his country's. He leaned back and shouted over to Dave Williams, who was playing against Trevor Blackwell on an adjacent Feature Match table, "Down with Team USA!"

Both Hegstad and Finkel chose to run blue-green Spontaneous Generation-Static Orb decks. Their openings were identical: turn 1 Sleight of Hand, turn 2 Sleight of Hand, turn 4 Gush (returning two Islands to hand) followed by Spontaneous Generation. Finkel tried to Counterspell Hegstad's Generation for 8, but Hegstad had a Foil ready to defend it. With Hegstad tapped out, Finkel went for his own, Hegstad Foiled, and Finkel Foiled back. Once all the dust had settled, each player had five Saprolings, and they immediately smashed into each other. 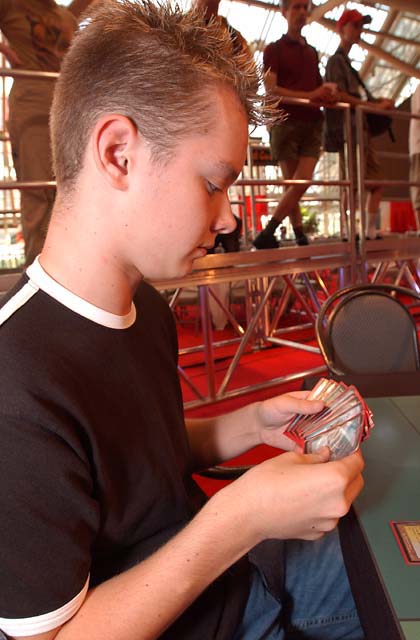 Since Hegstad had Foiled twice, discarding four cards in the process, Finkel felt Saproling Cluster would be to his advantage and he played it. His Fact or Fiction resolved a turn later and Finkel's advantage grew. When Hegstad tapped out for an Accumulated Knowledge and a Sleight of Hand, Finkel pressed his advantage and Spontaneous Generation for 8 resolved. Hegstad needed to react immediately, which he did with Static Orb. Finkel chose to leave all his guys untapped because once he untapped four lands, he went for Opposition with Thwart backup. Now all those untapped guys gave him a complete lock on Hegstad, and allowed him to tap Hegstad's Static Orb. Four guys hung back to keep Hegstad's land locked down while the rest started taking huge bites out of Hegstad's life total. Hegstad tried to quickly make guys using Finkel's Saproling Cluster, but he just couldn't make them fast enough.

Hegstad had to mulligan before game 2 and only had two lands in his draw. Finkel went for turn 4 Spontaneous Generation and Hegstad went for Counterspell. He eyed Finkel's three islands suspiciously while he did it, but he had no choice. Finkel did indeed have a Thwart and returning those three Islands both defended the Generation, and beefed it up to a total of 8 Saprolings. Hegstad did then draw land number 3, which allowed him to show off his Prodigal Sorcerer sideboard technology, but Tim couldn't shoot down tokens fast enough and three attack phases later Team USA had is first loss.