Round 2: Jon Finkel vs. Sol Malka 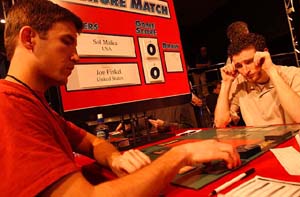 The People's Champion Sol Malka is nothing if not predictable. The inventor of "The Rock and His Millions" will always, always, always play black/green in constructed, and similarly prefers black/blue in draft. So it was no surprise when he sat down sporting a deck with Islands and Swamps (splashing two white cards) against Jon Finkel in round 2.

Finkel, on the other hand, plays just about anything that works in limited, and plays it well. This time, he had a red/green monstrosity sporting a pair of Shower of Coals as the backbreakers.

In Feature Matches, the player that wins the die roll can choose to play or draw, or choose what side of the "Red Zone" playmat to sit on. Malka won the roll, but decided to "defer" all the decisions to Jon, prompting Finkel to raise an eyebrow. Finkel, feeling like he won the roll, chose to play. I suppose it was all a ploy by Malka to have his library on his right side without looking like his priorities were screwed up.

Finkel started things out with a turn-two Rites of Spring, ditching a Barbarian Ring and an Anarchist for a Forest and a Mountain. Malka played a Dusk Imp, which was halted in its tracks by a Finkel Krosan Archer. Malka then dropped his Cephalid Broker, hoping to overwhelm Finkel with card quality.

Finkel had nothing of it, torching both of Malka's creatures with Shower of Coals, dealing 2 to Malka in the process and attacking him down to 16.

The board stabilized with an Aven Windreader, a Pulsating Illusion, and a Treetop Sentinel for Malka, and a mess of ground-pounders for Finkel. Malka was playing the waiting game, afraid to attack without opening himself up to a painful counter-strike. Finkel eventually drew Seton's Desire and put it on his Krosan Avenger; his threshold gave him a 3/1 lured regenerator that allowed his other creatures to walk on over and bash Sol to death.

Sol brought in a Deluge for his Divert, and Finkel swapped a Howling Gale in for one of his Thermal Blasts. 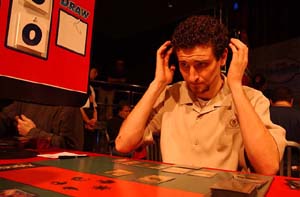 Malka put early pressure on Finkel with a turn-2 Cephalid Scout and a turn-4 Aven Fisher. He added Cephalid Broker to the table and held his breath when Finkel tapped five mana, anticipating another painful Shower. But it was only a Thermal Blast aimed at the Broker. Malka exhaled.

From there, the game turned into a question-and-answer session - Finkel would cast a threat, and Malka would deal with it, attacking for 3 in the air every turn. Dematerialize, Second Thoughts, and Kirtar's Desire bought Sol enough time for his fliers to finish Finkel off.

Finkel thought for a moment before Game 3, and then admitted that Sol was probably right, that drawing first was correct in this matchup. Sol wasn't thrilled with Jon's decision, and was even more dismayed when he had to mulligan his opening hand of six blue cards and a Swamp.

His six card hand was decent, and he put a Psionic Gifted Phantom Whelp, Aven Fisher, and Treetop Sentinel into play early. Finkel Reckless Charged over a Cartographer, added a Krosan Archer to the board to hold off Malka's fliers, and then Thermal Blasted Sol's Sentinel. 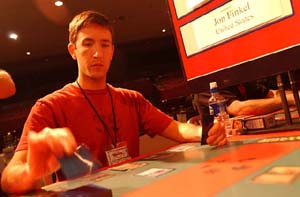 When Malka added a Dusk Imp to the table, Jonny Magic raised the finger... and then brought a Shower of Coals down upon Malka's team. Finkel then drew Dwarven Strike Force off the top and activated its haste ability to get enough damage past Malka's remaining creature.

Malka unfortunately never fully recovered from the mulligan and never got to five land which would have allowed him to cast his Aven Windreaders and other high end spells.