Round 2: Jon Stern vs. Jeff Cunningham 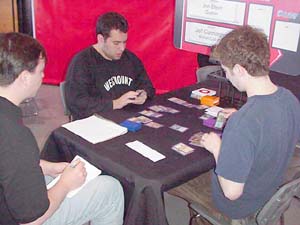 Jon Stern was a finalist at this tournament last year and went to Sydney as part of the Canadian National team. He is playing Wake today and lost his first round to a mono-black control deck.

In addition to being one of Magic's rising stars, Jeff Cunningham is one of the brightest young writers on the net. He recently revitalized this own site's Week in Review column and has composed some of the best tournament reports in recent memory for Brainburst. He is playing his trademark U/G deck but he also took a first round loss at the hands of a MBC player.

Jon mulliganed his hand but kept his next set of six, which included two Wraths and a counter. Jeff had only one land in his initial draw along with Careful Study, Quiet Speculation, Basking Rootwalla, Wild Mongrel, and Unsummon. It would have been a fine hand if the one land produced blue mana. It was a Forest but Jeff decided to keep it anyway.

Jeff answered Jon's Lonely Sandbar with a Basking Rootwalla and followed it up on the next turn with a Forest and Wild Mongrel. Jon's third land was a Brushland and he used it to Moment's Peace when Jeff cracked in for five on the next turn choosing to take one instead. Jon played the Wrath on his next turn—he fell to 17 from his painland. Jeff was out of gas until he found a land that produced blue and passed the turn back with no play.

Jon fell to 16 from his painland and played a Mirari's Wake. Jeff still had no blue and glumly played his fourth Forest. Jon had no pressure for the floundering British Columbian and cycled a Lonely Sandbar and had to burn for one when he drew into nothing. Jeff smelled an opening and finally found an Island and used it to cast Deep Analysis.

Jon was sitting on two Wraths, Counterspell, and Moment's Peace but had no play. Jeff on the other hand had a handful of spells just itching for the Island. Careful Study put Wonder and Quiet Speculation in the yard and a Phantom Centaur hit play. Jon peeled a Deep Analysis and used it draw four cards—falling to 12 in the process. Jeff attacked but he only managed to deal a point as Jon used his Brushland to cast another Moment's Peace from his hand. Jeff flashed his Deep Analysis back but it did not yield him another blue source.

Jon used one of his Wraths as spot removal to kill the Centaur. Jeff found a City of Brass with Careful Study and cast Wild Mongrel and Merfolk Looter, which earned the third Wrath from Jon. Jeff cast another Deep Analysis and found an Aquamoeba. Jeff attempted a Roar of the Wurm on the next turn, which was met with a Memory Lapse. Jon had 18 available mana to Jeff's 13 cards in graveyard and Jeff thought better of countering back. Instead he flashed back the Deep Analysis and sent the Aquadog in for three.

Jon played a Compulsion floating two mana and activated it. He eventually drew a second Counterspell with a white and blue floating but decided to ship one of them rather than burn for two or sac the Compulsion. He was rewarded with a Mirari and burnt for one when he played it—falling to seven. Jeff pressed on with his Aquamoeba even if it meant only dealing one point of painland damage whenever Jon cast Moment's Peace. Wonder joined Jeff's team.

Jon played an Exalted Angel and Jeff cast Circular Logic for more than the fourteen mana Jon had available. Jon countered and used Mirari. Jeff thought for a moment and used a second Circular Logic on the original spell countering the Exalted Angel. Jon burnt for one and fell to five. He went to four when he cast Moment's Peace on the next turn. 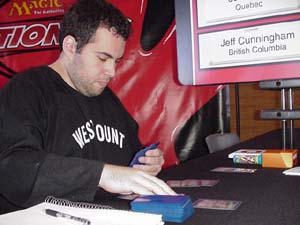 He fell to three the turn after that but was able to Cunning Wish for Chastise with a copy of the spell—his original Cunning Wish was countered. Chastise with Mirari on the next turn was met with two Unsummons but Jon Compulsed franticly and found a Memory Lapse for the second Unsummon but when all of the dust settled, Jeff had added a Roar of the Wurm and Jon was clinging on by the old fingernails at one.

On his turn he compulsed and cast multiple Deep Analysis thanks to Mirari desperately looking for an answer. "What could you possibly draw?" wondered Jeff. The answer was Renewed Faith with exactly enough mana to use Mirari and go to 12—after inevitably burning for one. Jeff swung in for nine and would probably win unless Jon ripped an n amazing card.

Cunning Wish yielded Opportunity and Moment's Peace and Jon was able to draw eight cards and cast the fog on Jeff's turn. Four Renewed Faiths later Jeff was reaching for the sideboard.

The first game devoured most of the game clock and there were only thirteen minutes remaining when Jeff shipped his opening hand back for six more. By the time he decided to keep the next six he had only ten minutes to salvage a draw or fall to 0-2.

Turn two Wild Mongrel got in for three on the next turn and was joined by a Rootwalla. Jeff did not have a third land and cast Quiet Speculation for three Deep Analysis. Jon cycled a Renewed Faith to undo some of Jeff's hard work. Jon was holding an Exalted Angel but his third land drop was Krosan Verge.

Jeff smashed in again hoping to put a dent in Jon's life total. He flashed back Deep Analysis but Jon's life total crept back up thanks to another cycled Renewed Faith. Jon did not have a fourth land. He wanted to play his Angel but had to pass the turn to activate his Verge and discarded a Deep Analysis with no play.

Jeff cast Careful Study and attacked Jon down to 13. Jon sacrificed his Verge and got to four lands—although only one produced blue mana at this point. He played a Forest on his next turn and cast Wrath of God. The Rootwalla was Unsummoned back to Jeff's hand and the let the dog go to the bin.

There were only two minutes left now and Jeff fell to 11 flashing back a Deep Analysis. He played a Wild Mongrel and sent the turn back to Jon who finally played his angel face down. Jeff's Rootwalla made a reappearance at the end of the turn. 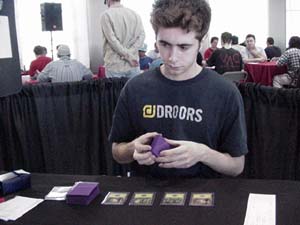 Jeff fell to eight when he flashed back yet another Deep Analysis but Jon had the Memory Lapse. Jeff bashed in and discarded two cards to his Mongrel including a Roar of the Wurm, which he promptly cast. Jon was on seven and Jeff was on eight when time was called during Jon's next turn. Jon played a Verge and sent the turn back to Jeff.

During Jeff's upkeep he used Cunning Wish to find...Krosan Reclamation. He shuffled Jeff's Wonder into the bin so he could block with the morph but Jeff was still able to kill him by pumping the Rootwalla and discarding his hand to the Mongrel. "No Peace left in the 'board?" Jon was glum as he was heading to the draw bracket to face nothing but Wake decks for the remaining Standard matches this weekend, "All in the main..."