Round 2: Joost Vollebregt vs Frederico Bastos 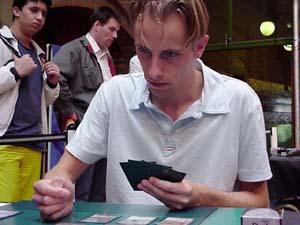 This year's European Championship seemed to be a fashion show as many of the player expressed their creativity with their hairstyles. Frederico for example had his hair dyed red.

Frederico has been on two Pro Tour top 8 and has had a fair amount of success at it.
Joost on the other hand is known for his 6-0 record in Standard 5-0-1 record in extended followed by 0-6 in the Limited portion having finished 33rd. He also has three Grand Prix top 8's.

Joost thought about his opening hand and after a while decided to mulligan.
Frederico kept his hand and the game was on its way.

Both players just dropped lands for some turns until Joost cast a Phantom Whelp. His opponent on the other hand, cast Phantom Tiger. During his turn, Vollebregt cast Obsessive Search to find anything but went out empty. Frederico then attacked and a Teroh's Faithful joined the game. His opponent decided to go over Frederico's head and cast a Battlewise Aven. The Tiger came in once again to put Joost at 13 life. An Anurid Barikripper was summoned afterwards. On the other side of the table, Joost attacked for the first time and brought Frederico down to 22. He then cast a Patrol Hound but it still couldn't stop the Tiger with the Hound as he later found out.

Vollebregt thought he had found a solution for the Tiger with Treacherous Vampire but he got suspicious when his opponent still attacked. He went on the safe side and blocked with the Whelp also increasing his graveyard to feed his Vampire.

Frederico didn't cast the Wurm his next turn but kept it in his hand while looking at a 5/5 Aven with Cagemail on it.

After a while the Wurm re-entered play having Fiery Temper and Embolden in hand. The Dutchmen was on the offensive with an Aven Flock picking away on Basto's Life Totals. Bastos draws a Shelter and tried to get past his opponent naming white. Still, Joost had two blue creatures with which he could block with and so he did: Cephalid Looter and an Aven Fisher. Frederico prevents damage via Embolden to his Wurm for it to see another day.

Vollebregt started to gain the upper hand with Grotesque Hybrid, which would practically kill all of Bastos' deck.

A Mystic Zealot joined Joost's forces not long after leaving his opponent at 5 life.
Bastos was now in a very tight spot. The next time he got attacked he only lost one life since Embolden only prevents four damage. Frederico had been waiting for Shower of Coals to Finish off the game but lost. At the end he flipped over the top cards and there it was, Shower of Coals.

Frederico was a little bit upset for hawing drawn all but one of his lands but continued with his well known sympathy towards his opponents. 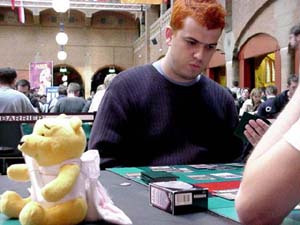 Joost played a Hydromorph Guardian on his third turn, which was met by a Halberdier. A Phantom Nomad with Cagemail teamed up with the Guardian. Then a Battlewise Aven entered play to start the hostilities as the Portuguese remained only with a Halberdier on his side. The Dutchmen was far ahead in terms of card advantage and went even more with Deep Analysis. Frederico found Arcane Teachings and cast it on his Barbarian. Joost had found a Churning Eddy to completely wreck all defences Bastos had created. The Portuguese found his Shower this time, and wiped the table clean.

With seven minutes on the clock Frederico started to rush. He played a Sonic Seizure on the freshly cast Aven Flock and cast his Halberdier. On his next turn he got a 6/6 Ivy Elemental into play but Joost wasn't very worried about that for he could always bounce it back with Repel or take control of it with his Chamber of Manipulation.
The game went back and forth with Joost taking control of the Ivy Elemental and Frederico´s creatures at bay.

In extra turns Frederico attacked with everything, unsuccessfully though and ended up losing the round to time.