Round 2: Josh Bennett vs. Steve Horowitz 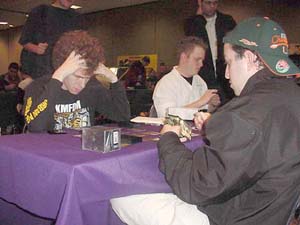 A few years ago, when word got out that then-editor of the Sideboard Omeed Dariani was going to recruit some of his writer buddies from Star City Games to come and cover pro-level events, most people agreed it made sense. After all, folks like Anthony Alongi can (a) understand the game and (b) write well, so the policy seemed like a perfect fit.

But Josh Bennett? Are you kidding? The Canadian self-proclaimed misanthropist with the crazy-go-nuts hair? Most people were probably afraid he'd stab or poison them instead of writing about them the day he showed up, spiked dog collar and all.

But such fears were clearly unfounded. Now, after a long stint as jet-setter, match coverer, Asian diplomat, and Jeff Donais' indentured servant, Josh has carved a niche for himself in the pro community. I mean, when you think of the Pro Tour, what names leap to mind? Sure, Kai Budde. Jon Finkel, Mark Rosewater. Okay, further down the list then. Down more. Past that guy; he made the finals at a GP once. Down further. Yeah. See? Somewhere between Wim Vanrie and Julian Brown-Santirso in your mental PT hierarchy is Josh.

What's amazing about Josh is how he's all but shed his hatred of mankind in the time he's been working for the Sideboard. In fact, I believe he's almost ready to add "people" to the list of things he likes, right after Dr. Pepper, Laibach, and German board games. Whereas most of his peers – that mass of middle-class Magic talent that fills up strategy websites with page after page of mindless railing – against the game, against the company, against luck, formats, colors, each other – in order to cope with their own shortcomings and rationalize their addictions, Josh has decided to use his powers for good. Forget the haters. Josh loves the MTG and he's not afraid to tell you.

With every booster opened, every hand drawn, every creature blocked, Josh can find the good story. The interesting angle on the game and its players. The hidden nugget that makes you smile when you read the coverage.

But this weekend, he's turned the laptop off and donned his player garb, looking to be the star of the story as opposed to the scribe. How much has he learned in his years of following the top players in the world? We shall see here.

Josh has a black/red deck which splashes green for a couple Beasts. He has only two morph creatures, but plenty of removal including a well-connected Sparksmith to make sure his creatures get through.

His opponent is Steve Horowitz, a Miami player that has been to three Pro Tours. ("It's over, then," sighed Bennett, upon hearing this news.) Horowitz hasn't had a good PT finish, but he wanted to point out that his team was one win away from day 2 at the Team PT in 2001, but his teammate Eugene Charron activated a Meteor Storm with his opponent at 17 life and then was one land short of casting his Penumbra Wurm a turn later. Horowitz was obviously traumatized by the event.

Horowitz has a black/green Beast deck which splashes white for Exalted Angel and Pacifism. Both players had one bye and were anxious to get moving.

As they shuffled, Horowitz asked, "Didn't you used to write? Isn't this like your first tournament?" Josh chuckled and replied, "It might as well be."

A moment later, Paul Jordan, playing at the next seat down, looked at Josh and asked, "Is this a real tournament match? Shouldn't you have a computer?" Oh, to be so unfairly typecast. 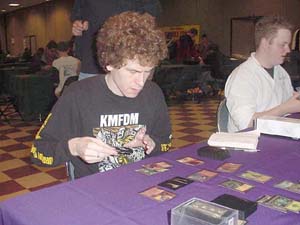 Josh came out strong in Game 1 with Goblin Sledder and Sparksmith. Horowitz made the dangerous Wretched Anurid (Is the card good or no? The jury is still out...). Josh played a face-down Spined Basher and passed.

Horowitz attacked and played a face-down creature which Josh immediately shot. Josh was stuck on three land and had no play on his turn, and Horowitz kept attacking and added a Snarling Undorak to the table. Josh peeled a third Goblin – Spitfire Handler, which allowed him to shoot the Undorak. Josh added nothing else to the able, and Horowitz cycled a Krosan Tusker and played a Wirewood Herald and Symbiotic Elf. Josh had shot the Wretched Anurid, and the game was a bloodbath with both players at 6.

It didn't really matter, as Josh could find neither a swamp nor a fifth land, and was holding six unplayable cards when Horowitz tapped seven lands for Krosan Tusker. He added an Aphetto Vulture and an Elvish Warrior, and that was the game.

Josh played first in game 2, but Horowitz had the first play, a Festering Goblin. Horowitz also had a Wirewood Savage on turn three, but Josh had Shock for that bad boy. Horowitz added a Nantuko Husk to the table. 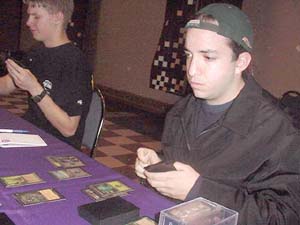 Horowitz had a Pacify for the red Beast, and Bennett was all fr0wnz. Bennett summoned and served with an Aravax, hoping to come out ahead in a theoretical damage race.

Horowitz attacked with the Husk and Uncle Fester; Bennett cycled a Solar Blast on the Goblin (probably not the best time to do so), and Horowitz sacked it to the Husk, doing 4 damage.

Josh brought forth a Severed Legion, and Horowitz made a fat ol' Tusker. With Aravax and Legion staring down Tusker and Husk, the worst thing Josh could do would be attack with both guys.

Unfortunately, that's what he did. The Beasts traded, but by sacking the Tusker to the Husk once damage was assigned, the Legion died but the Hüsker Dü did not. The Husk, backed by a Cruel Revival, did Josh in.

Ah, well. One can dream.