Round 2: Julien Nuijten vs. Itaru Ishida: Making the List

As the players sat down in the feature match area, Osyp looked around and broke out laughing at the site of a supersquad member sitting at every table. "Hahahahahaha….we are so stupid. There is only one person here not on our mailing list." 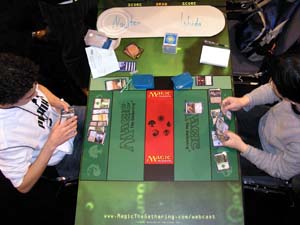 Sensei's Divining Top was popular for both Nuijten, left, and Ishida.

Julien looked puzzled and shouted over at Kai Budde one table over as he shuffled up for his match with Kamiel Cornelissen, "Kai? Are you on the list?"

Kai, who has worked with both TOGIT and the Dutch in the recent past with less-than-stellar results, looked over at the reigning World Champion with a huge grin. "No and I hope I play against people from your list all weekend."

Osyp shrugged, "To be fair, there are only like six people in the room not on our list."

One of those players was the young World Champion and he was playing their Gifts Ungiven deck. There has been considerable attention paid to any matches between the supersquad of players that Osyp referred to and the Japanese, since Osyp half-kiddingly claimed the goal of the team was "to beat the Japanese."

While it seemed like all of North America and the Netherlands have coalesced into two distinct teams, the same is not true of the Japanese. There seem to be four different groups that have formed around four different designers: Akira Asahara, Tsuyoshi Fujita, Ryuchi Arita, and Julien's opponent for this round, Itaru Ishida. Itaru's most recent accomplishment was winning Grand Prix-Singapore with his aggro Tog deck. For this tournament he had built his own version of Gifts that features Heartbeat of Spring and a couple of Myojins.

Both players kicked off with Sensei's Divining Top and began using them early and often. Julien came out a little faster in terms of mana thanks to Sakura-Tribe Elder and Kodama's Reach. When Ishida announced Cranial Extraction and named Gifts Ungiven he drew an approving nod from Nuijten. Ishida made note of Meloku, Final Judgment, Cranial Extraction, and Hana Kami in Julien's hand.

Itaru was a little behind on land chasing after Julien's Reach and Elder, and Julien "wastelanded" him with a second copy of Shizo, Death's Storehouse. Itaru found an Elder to right his wayward mana. Both players went into draw-go mode for a few turns, spinning their Tops. Julien attempted Cranial Extraction but Itaru countered it with Time Stop - which drew delighted murmurs from the spectators slowly gathering along the rail.

Meloku came down on Julien's side of the board. He made a guy and passed the turn. Itaru waited until Julien tapped out at the end of Ishida's next turn to Hideous Laughter splicing Horobi's Whisper to take down Meloku and all three of the tokens.

Julien played his Hana Kami. Itaru had not only caught up on mana by this point but, thanks I part to Julien's Meloku, surpassed Julien with a Kodama's Reach. Julien cashed in his Hana Kami for his Reach and played it splicing Soulless Revival for the Hana Kami. The decks were starting to spark into life.

Julien cast Cranial Extraction naming Cranial Extraction splicing Soulless Revival for a Tribe Elder. He took careful study of Ishida's deck and made mental note of the blue and black Myojins, another Time Stop, Hana Kami, and Meloku as cards to name for future iterations of the Hana Kami cycle.

Ishida thought about his turn for a good while before dropping the treacherous Heartbeat of Spring. He flipped the Top for Gifts Ungiven and offered a buffet of the two Myojin Time Stop and Soulless Revival. Julien debated his split - Itaru still had ten mana available to him - and he finally offered Time Stop and the blue Myojin. Ishida passed the turn and Julien sacrificed his Elder and activated his Top. 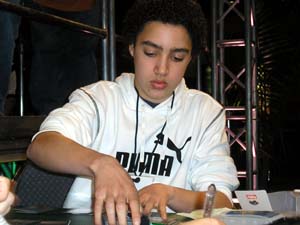 Julien announced his upkeep and his draw and Ishida waved him on. Julien stared at his hand and looked for how to play the turn knowing that there was a Time Stop lurking in the wings. He offered Hana Kami and Itaru crossed it off his list of known cards and gestured for Julien to continue with his turn. Kodama's Reach splicing Soulless Revival for Meloku was also perfectly fine with Ishida. He activated his Top and looked for the best bait to hook the Time Stop. Hana Kami returned Cranial Extraction with Ishida's blessing. When Nuijten attempted the Extraction, it drew the six mana pseudo- counterspell.

Ishida played the blue Myojin and promptly drew 13 cards. Not satisfied with those cards or the ones on the top his deck, Ishida shuffled with Kodama's Reach and passed the turn, discarding six cards. Julien cast Reach, splicing Soulless Revival and Horobi's Whisper. He then proceeded to "go off" with Kodama's Reach and Soulless Revival but he had no action spell to recycle despite searching with his Top between each shuffle. He ended the turn with 16 mana in play and more than a few still in hand.

Itaru Topped to find Hana Kami. He returned the Soulless Revival and spiced it onto Wear Away - targeting Julien's Top - to return the black Myojin. Ishida played it and passed the turn, activating the Myojin's ability during Julien's draw step to savage the young Champion's hand.

Myojin got his beat on and Itaru played Meloku. Julien flipped the top card of his library on the table - it was Final Judgment. Ishida used Horobi's Whisper on his own legend so it would go to the graveyard and allow him to reset with the Hana Kami engine on the next turn. Julien had another Judgment on top of his deck but Ishida could just rinse and repeat at this point in the game. Julien scooped up his almost 20 lands and reached for his sideboard. 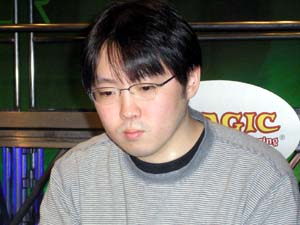 The stoic Ishida let Kodama of the North Tree do much of the heavy lifting.

Both players started off with six cards for the second go 'round. There was an early Top for Ishida. Julien's Elder was kept from doing much of anything thanks to Nezumi Graverobber. Julien finally gave him something to activate the Graverobber thanks to Three Tragedies. Ishida pitched another Graverobber, Hero's demise, and an Island. Graverobber flipped and came over. Julien chumped with his Elder and untapped into Final Judgment but Ishida hammered him with Time Stop. He could also now start recurring Julien's Elder.

Ishida got in for four. He replayed his Top and sat back on five mana to use his Nighteyes. Julien took a stab with Psychic Spear but the only card in Ishida's hand was Kodama of the North Tree - which provided Ishida with a better target to reanimate than the Elder. Julien played his own Graverobber and passed the turn to Ishida who made Kodama return end of turn.

Julien fell to 10 on the next attack from Kodama and summoned The Clouded Mirror for his next turn. Ishida paid five to fetch a land from his library. Julien fell to 4 from the next blow by the North Tree. He spun the Top end-of-turn and got in for two with Meloku leaving all his mana up. When Ishida went to reanimate an Elder, Julien fizzled it with Soulless Revival.

Two more lands became tokens and Julien took two trample down to 2 but killed the North Tree. Ishida cast Myojin of Night's Reach and passed the turn, using the ability during Julien's draw. Julien flew over for two, made a guy and replayed the land. He made a second token when Myojin attacked and double blocked it. Julien attacked for two and when Ishida activated Nighteyes, Julien took advantage of that opportunity to remove the Myojin and another Graverobber from the game.

The game settled into draw-go - or perhaps Top-go is more appropriate - for a while with Julien trying to rebuild his ravaged hand and not die in the process. Ishida was looking for a way to get through and was able to thin his deck twice a turn thanks to 10 mana and counting, Nighteyes, and Julien's Elder. Julien was able to strip Ishida's yard and both legends were vaporized.

Ishida untapped and played Final Judgment. His Cranial Extraction named Final Judgment and with time running out he quickly pawed through Julien's deck. Another Graverobber came down but at this point it was just a 2/1 beater since Julien's bin was about a 1/4-inch thick. Julien had an Elder to hold the rat at bay. There was less than one minute left at this point.

When time was called it was Julien's turn and the best he could hope for was a tie in the match. The World Champion Cranially Extracted blue Myojins - Ishida revealed he was holding Time Stop. Ishida removed a heap of cards end-of-turn and untapped into Meloku. Julien showed him a freshly drawn (but irrelevant) Final Judgment that Ishida had overlooked in his haste. Ishida shrugged sheepishly and flashed him the Time Stop, and after 76 minutes of play Ishida won the match 1-0 with the second game well in hand.