Round 2: Justin Ellis vs. Rod Ho

"Only one bye?" Justin asked the 2-time Australian Champion as they sat down for their round two encounter. Rod explained that he hadn't played actively for a couple years and his rating had slid a little bit, but now he's back ready to reclaim his former glory. He had no idea how tough this match was going to be

The best play in this format is probably a second turn Wild Mongrel, and that's how Justin jumped out of the gates, and going first meant that he had a hallowed healer down as well before Rod managed his first drop - a Dusk Imp. Rod tried to stem the flow of early beats with an Acceptable Losses on the hound but an embolden put Justin Further ahead with card advantage. Rod was down to 14 before he could drop a Metamorphic Wurm. He had to make a hard choice with a blazing salvo but took 5 to the dome putting him at a precarious 9. Justin had dried up with his creatures but the Mongrel got through for another 2 damage - No cards discard to it yet but hey, mongrel is so good for what it can do rather than what it actually does. Rod took his first offensive with the wurm coming in, only to have it blocked by the healer. Justin cast gallantry instead of flashing the embolden, it was at this point both players thought it was heading for quick finish. But Rod cast his afflict to good effect, removing the healer and not giving Justin another card. The Dusk Imp chumped the mongrel but instead of pitching a card he spent his embolden. Again Rod was worried about the last 3 cards in his opponent's hand. 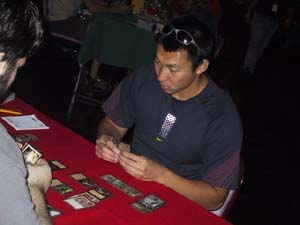 Turn 8 saw Justin drop an Angelic Wall, and Rod, again nothing, for the third turn running. It should be said however that he had no problems with land shortage this game. Justin's reckless charge on his mongrel saw it blocked by the wurm, which was then the target of Rod's Muscle Burst. The fact that Rod popped two sacrifice lands through an egg to cast the Burst saw him gain threshold, and a 10/10 wurm to boot! The end of the mongrel? Nope, Justin had another one up has sleeve - I guess that's why he didn't pitch to the other one earlier. Rod was then able to stabilize with a Chain Flinger and a diligent farmhand as well as beat for 7 with the wurm. The new mongrel came in with the same gusto as it's predecessor, to be blocked by the farmhand which grabbed a mountain on his way out. Rod was down to 7 at that point and after Justin Dropped a Luminous Guardian it was pretty clear that Rod would need something special to get out of Jail. With the Sydney patented comment of "How lucky" he was then able to play a Vampiric Dragon, then in for another 7 damage. How lucky indeed!!! The mongrel came in and the Dragon took one for the team, as Justin's muscle burst resolved for 5. A Squirrel Nest set for the stall against the wurm bet he then scooped as an Infected Vermin hit the table - combine that with the Chain Flinger, and a win for Rod was coming in 2 more turn at the most.

Again Justin played, but stalled at 2 mana, although it wasn't as bad as most stalls, as he could cast his Mad Dog and an Angelic Wall to optimal effect. Rod was able to get a Dusk Imp (which traded with the mad dog) and a Nantuko Druid out with his opponent still at 2 land. Eventually the land came and it was a forest to boot - which opened the door for another Hallowed Healer. The reply from Rod was a Famished Ghoul and a Ghastly Demise on the Healer - he really wanted that thing out of the way. It was followed with a second healer, which was also dealt with by an Afflict. The ghoul opened Rods account with 5 damage (Druid). Its second attack wasn't' so successful, with Gallantry this time resolving (On the wall) killing the ghoul, which swept the 2 healers out of the graveyard. 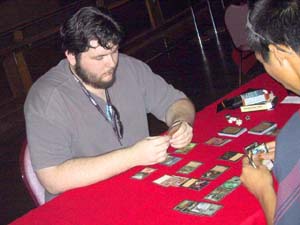 Things got serious then as the Metamorphic Wurm returned to be paired up against Justin's Rabid Elephant. Justin put his nose in front again by dropping a Halberdier and a (late) Wild Mongrel, and the elephant came through twice for 6 damage to Rod. When you drop mongrels, however, Rod tends to drop Dragons, which are a little harder to deal with. Embolden bought him some time but the dragon just started shooting the defenders (Halberdier and Wild Mongrel). Rod took another Blazing Salvo on the chest dropping him to 5, but that was plenty as Justin only had the wall to defend. A Springing Tiger tapped Justin out which left only math to Rod, Dragon (8/8) plus Nantuko Druid (+2/+2) equals trouble for Mr. Ellis (at 10 life).